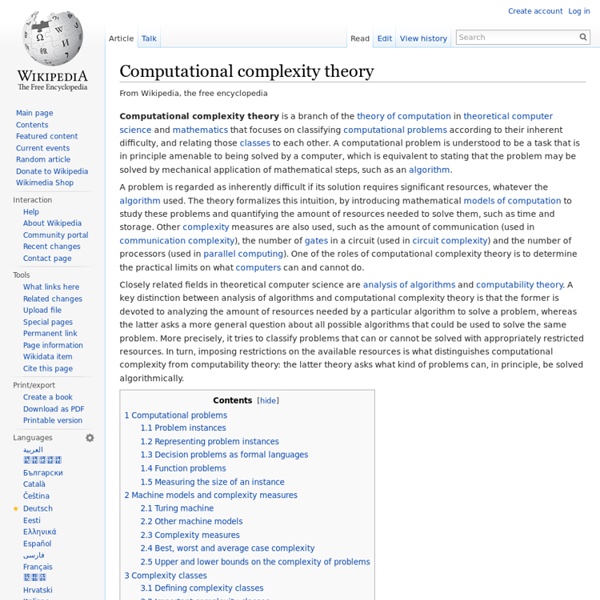 Computational complexity theory is a branch of the theory of computation in theoretical computer science and mathematics that focuses on classifying computational problems according to their inherent difficulty, and relating those classes to each other. A computational problem is understood to be a task that is in principle amenable to being solved by a computer, which is equivalent to stating that the problem may be solved by mechanical application of mathematical steps, such as an algorithm. A problem is regarded as inherently difficult if its solution requires significant resources, whatever the algorithm used. The theory formalizes this intuition, by introducing mathematical models of computation to study these problems and quantifying the amount of resources needed to solve them, such as time and storage. Closely related fields in theoretical computer science are analysis of algorithms and computability theory. Computational problems[edit] Problem instances[edit] Turing machine[edit]

Materials science Depiction of two "Fullerene Nano-gears" with multiple teeth. Materials science, also commonly known as materials engineering, is an interdisciplinary field applying the properties of matter to various areas of science and engineering. This relatively new scientific field investigates the relationship between the structure of materials at atomic or molecular scales and their macroscopic properties. It incorporates elements of applied physics and chemistry, with significant media attention focused on Nano science and nanotechnology. History[edit] Before the 1960s (and in some cases decades after), many materials science departments were named metallurgy departments, from a 19th and early 20th century emphasis on metals. Fundamentals[edit] The basis of materials science involves relating the desired properties and relative performance of a material in a certain application to the structure of the atoms and phases in that material through characterization. Classes of materials[edit] [edit]

Physics Various examples of physical phenomena Physics is one of the oldest academic disciplines, perhaps the oldest through its inclusion of astronomy.[8] Over the last two millennia, physics was a part of natural philosophy along with chemistry, certain branches of mathematics, and biology, but during the Scientific Revolution in the 17th century, the natural sciences emerged as unique research programs in their own right.[b] Physics intersects with many interdisciplinary areas of research, such as biophysics and quantum chemistry, and the boundaries of physics are not rigidly defined. New ideas in physics often explain the fundamental mechanisms of other sciences[6] while opening new avenues of research in areas such as mathematics and philosophy. Physics also makes significant contributions through advances in new technologies that arise from theoretical breakthroughs. History Ancient astronomy Astronomy is the oldest of the natural sciences. Natural philosophy Classical physics Modern physics

Agricultural machinery Agricultural machinery is machinery used in the operation of an agricultural area or farm. History[edit] The Industrial Revolution[edit] With the coming of the Industrial Revolution and the development of more complicated machines, farming methods took a great leap forward.[1] Instead of harvesting grain by hand with a sharp blade, wheeled machines cut a continuous swath. Steam power[edit] Internal combustion engines[edit] Types[edit] A John Deere cotton harvester at work in a cotton field. From left to right: John Deere 7800 tractor with Houle slurry trailer, Case IH combine harvester, New Holland FX 25 forage harvester with corn head. Combines might have taken the harvesting job away from tractors, but tractors still do the majority of work on a modern farm. After planting, other implements can be used to cultivate weeds from between rows, or to spread fertilizer and pesticides. Modern irrigation relies on machinery. New technology and the future[edit] References[edit] See also[edit]

Military technology Military technology is the collection of equipment, vehicles, structures and communication systems that are designed for use in warfare. It comprises the kinds of technology that are distinctly military in nature and not civilian in application, usually because they are impractical in civilian application, have no legal civilian usage, or are dangerous to use without appropriate military training. It is common for military technology to have been researched and developed by scientists and engineers specifically for use in battle by the armed forces. Many new technologies came as a result of the military funding of science. There are a significant number of military inventions whose technologies were originally developed and designed for military purposes, and which are now used by civilians with sometimes minor or no modifications at all. Vehicles and transports[edit] Warships are watercraft for combat and transportation in and on seas and oceans. Military robots[edit] Fortifications[edit]

Human genome The human genome is the complete set of genetic information for humans (Homo sapiens). This information is encoded as DNA sequences within the 23 chromosome pairs in cell nuclei and in a small DNA molecule found within individual mitochondria. Human genomes include both protein-coding DNA genes and noncoding DNA. The Human Genome Project produced the first complete sequences of individual human genomes. Although the sequence of the human genome has been (almost) completely determined by DNA sequencing, it is not yet fully understood. The haploid human genome contains approximately 20,000 protein-coding genes, significantly fewer than had been anticipated.[2][3] Protein-coding sequences account for only a very small fraction of the genome (approximately 1.5%), and the rest is associated with non-coding RNA molecules, regulatory DNA sequences, LINEs, SINEs, introns, and sequences for which as yet no function has been elucidated.[4] Molecular organization and gene content[edit] Table 2.

Cartography Cartography (from Greek χάρτης khartēs, "map"; and γράφειν graphein, "write") is the study and practice of making maps. Combining science, aesthetics, and technique, cartography builds on the premise that reality can be modeled in ways that communicate spatial information effectively. The fundamental problems of traditional cartography are to:[citation needed] Set the map's agenda and select traits of the object to be mapped. This is the concern of map editing. Traits may be physical, such as roads or land masses, or may be abstract, such as toponyms or political boundaries.Represent the terrain of the mapped object on flat media. Modern cartography is largely integrated with geographic information science (GIScience) and constitutes many theoretical and practical foundations of geographic information systems. History[edit] Mappa mundi are the Medieval European maps of the world. The Arab geographer Muhammad al-Idrisi produced his medieval atlas Tabula Rogeriana in 1154. Map types[edit]

Astronomy Astronomy is a natural science that is the study of celestial objects (such as moons, planets, stars, nebulae, and galaxies), the physics, chemistry, and evolution of such objects, and phenomena that originate outside the atmosphere of Earth, including supernovae explosions, gamma ray bursts, and cosmic background radiation. A related but distinct subject, cosmology, is concerned with studying the universe as a whole.[1] Astronomy is one of the oldest sciences. During the 20th century, the field of professional astronomy split into observational and theoretical branches. Astronomy is one of the few sciences where amateurs can still play an active role, especially in the discovery and observation of transient phenomena. Astronomy is not to be confused with astrology, the belief system which claims that human affairs are correlated with the positions of celestial objects.[3] Although the two fields share a common origin they are now entirely distinct.[4] Etymology[edit] History[edit]