Introduction to Programming in Java: An Interdisciplinary Approach 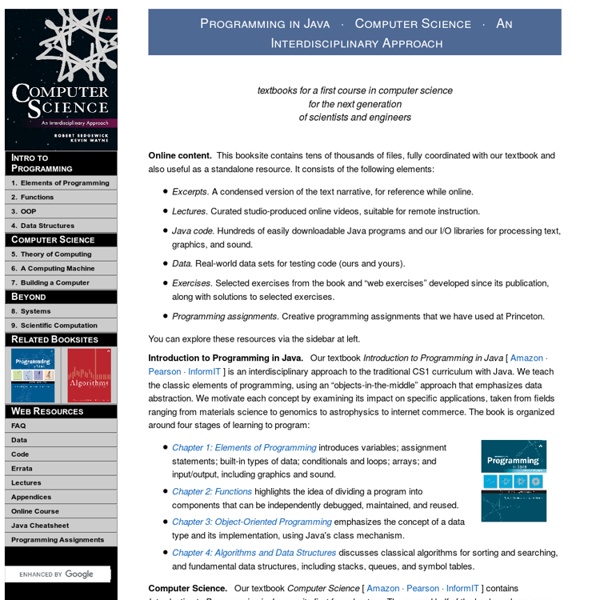 a textbook for a first course in computer sciencefor the next generationof scientists and engineers Textbook. Our textbooks Introduction to Programming in Java [Amazon · Pearson · InformIT ] and Computer Science [Amazon · Pearson · InformIT ] are an interdisciplinary approach to the traditional CS1 curriculum with Java. We teach the classic elements of programming, using an "objects-in-the-middle" approach that emphasizes data abstraction. We motivate each concept by examining its impact on specific applications, taken from fields ranging from materials science to genomics to astrophysics to internet commerce. The first half of the book is organized around four stages of learning to program: Chapter 1: Elements of Programming introduces variables; assignment statements; built-in types of data; conditionals and loops; arrays; and input/output, including graphics and sound. Booksite. For students: Java programming environment. For instructors: Python. Copyright © 2000–2016 and .

Guide to the Philosophy of Mind Guide to the Philosophy of Mind Compiled by David Chalmers Since 1997 I have been philosophy of mind editor for the Stanford Encyclopedia of Philosophy. By now we have accumulated enough entries in the philosophy of mind that it's the equivalent of a pretty definitive reference work in the field. The first list below includes the entries classified under "philosophy of mind" in the encyclopedia. SEP Philosophy of Mind entries Other relevant SEP entries Python Advanced: Introduction into the Sys Module Information on the Python Interpreter Like all the other modules, the sys module has to be imported with the import statement, i.e. import sys If there are questions about the import statement, we recommend the introductory chapter of our basic course concerning this topic Modular Programming and Modules The sys module provides information about constants, functions and methods of the Python interpreter. dir(system) gives a summary of the available constants, functions and methods. The module sys informs e.g. about the maximal recursion depth (sys.getrecursionlimit() ) and provides the possibility to change ist (sys.setrecursionlimit()) The current version number of Python can be accessed as well: >>> import sys >>> sys.version '2.6.5 (r265:79063, Apr 16 2010, 13:57:41) \n[GCC 4.4.3]' >>> sys.version_info (2, 6, 5, 'final', 0) >>> Command-line arguments #! We save this script as arguments.py. Changing the output behaviour of the interactive Python shell Standard data streams 0 has no inverse

Lecture Slides for An Introduction to the Analysis of Algorithms These slides are for the first half of an undergraduate course taught at Princeton, developed to provide an overview of An Introduction to the Analysis of Algorithms and Analytic Combinatorics. The course format is "introduce-read-discuss". We introduce a set of topics in lecture; students read about the topics and work selected exercises between lectures, and we discuss any questions about the reading and the exercises at the beginning of the next lecture. While some of the reading material may be difficult for a typical undergraduate to master on such a quick pass through, a substantial fraction of the coverage is elementary. Lecture slides are available both in 1-up format (accessible by clicking the lecture name when it is activated as a link) and in “4-up” format (accesible by editing the extension -2x2 to the filename in your browser). Lecture 1, slide 33.

An informal introduction to O(N) notation Unless you've read a book on the Analysis of Algorithms, or have managed to pick up the basics along the way, the "O(N)" (AKA "Big O") notation that sometimes gets tossed around when comparing algorithms might seem obtuse. But the ideas that the notation expresses can keep you out of trouble, so it's worth picking up the basics. Here are enough of the informal basics to get you comfortable when O(N) notation starts getting tossed around informally. O(N) notation is used to express the worst-case order of growth of an algorithm. When being informal, people often conflate general-case with worst-case behavior, though the more formal folk will throw in some additional symbols to distinguish the two. Common Orders of Growth O(1) is the no-growth curve. O(N) says that the algorithm's performance is directly proportional to the size of the data set being processed. Depending on the algorithm used, searching a hash is O(N) in the worst case. O(N3) and beyond are what you would expect. See Also

CodeNow, the nonprofit that teaches inner city kids to code, lands in San Francisco It only took a few months for Wilfred, a teen from a rough neighborhood in Washington D.C., to begin handing out handwritten business cards with the title “future engineer.“ With a presence in D.C. and now San Francisco, CodeNow is a nonprofit that encourages high school students from inner city neighborhoods to pick up coding skills. Wilfred (pictured left, teaching a fellow student) was one of the first to join the program — he practiced up to five hours a night and has a proclivity for the programming language Ruby on Rails. Wilfred’s was just one of the many heartwarming stories shared at the launch event, held at a co-working space in San Francisco this week. “About 40 percent of the students have the potential to be developers,” said CodeNow founder Ryan Seashore during a phone interview with VentureBeat. There are already over 50 alumni of the CodeNow program, which has close ties to the tech community.

Electrical Engineering and Computer Science What not to do during an interview | Dan Dreams of Coding Whenever you find yourself doing one of the following things during an interview, just don’t. OK? Don’t suck at something you say you’re an expert at Seriously, how often do I talk to Java experts who don’t know how to use the most basic java.util classes? Or bash experts who don’t know how to grep? Or 3D math experts who don’t know anything about the dot and cross products? Don’t make excuses for why you failed Sometimes you get caught flat-footed, or your brain seizes up, or you have a bad day, or you go down the wrong path and get stuck. Don’t be arrogant, don’t act superior, don’t be a dick Should be a no-brainer, right? Don’t badmouth an old employer Even if you worked for Satan in the helpdesk department of the third circle of hell, it’s unprofessional to trashtalk an old employer. Don’t swear Some interviewers won’t care about your language during the interview, but others will – a lot. Don’t chatter on and on You don’t want to be labeled a “talker”. Don’t go in cold Like this:

Release your inner poet: Use servlets to create a collaborative poetry app I'm sure most of you have seen magnetic poetry, that refrigerator-magnet word game whereby you arrange individual word magnets into poetic musings. You may have even unearthed an applet version of this game during your online adventures. The applet presents a selection of words in the form of electromagnetic tiles that you drag around with your mouse. Although the poetry game is quite fun, the applet actually represents outdated, mid-90s technology. To bring the applet up to date we're going to add a collaborative touch. Note, though, that our creation requires the most robust of Java virtual machines. AppletViewer on SolarisHotJava on SolarisMicrosoft Internet Explorer 4.0 on SolarisMicrosoft Internet Explorer 4.0 on Windows 95/NTNetscape Communicator 4.04 (with JDK 1.1 support) on SolarisNetscape Communicator 4.04 (with JDK 1.1 support) Windows 95/NT Click here to view the applet. Offline collaboration Online collaboration The collaborative poetry framework Client side Server side Learn More