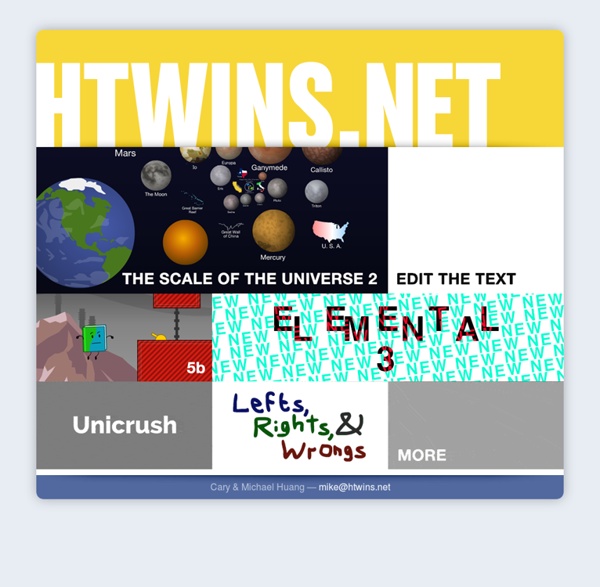 National Gallery of Art NGAkids Art Zone SEA-SAWS SEA-SAWS is fun for kids of all ages. Select photographs of natural and man-made objects, then arrange the pieces to create a seascape or an abstract composition. The BUILD tool helps you construct animated characters and set them in motion. (Shockwave, 7.5 MB)

Free New Online Photo Editing Websites to Have Fun With There are a lot of online resources available where You can change, enhance and make funny photo editing without knowing and program like Photoshop. Maybe You want to be on magazine cover, want Your own personalized dollar or maybe just want to change Your mood? Now You can do it with just few mouse clicks and in few seconds. 10 Mind-Blowing Theories That Will Change Your Perception of the World Reality is not as obvious and simple as we like to think. Some of the things that we accept as true at face value are notoriously wrong. Scientists and philosophers have made every effort to change our common perceptions of it.

The Basic Laws of Human Stupidity by Carlo M. Cipolla, Professor of Economics, UC Berkeley in Whole Earth Review, Spring 1987 The First Basic Law of Human Stupidity asserts without ambiguity that Always and inevitably everyone underestimates the number of stupid individuals in circulation... As you consider Dr. Cipolla's perspective on such matters, what do you think of the people who manage his estate?

7 Lessons From 7 Great Minds Have you ever wished you could go back in time and have a conversation with one of the greatest minds in history? Well, you can’t sorry, they’re dead. Unless of course you’re clairaudient, be my guest. Whole Systems This area is devoted to the study of whole systems. Nature is a whole system. But also an economy, a family, a company, a community, or many other things, can be looked at as whole systems. Why Nikola Tesla was the greatest geek who ever lived Additional notes from the author: If you want to learn more about Tesla, I highly recommend reading Tesla: Man Out of Time Also, this Badass of the week by Ben Thompson is what originally inspired me to write a comic about Tesla. Ben's also got a book out which is packed full of awesome. There's an old movie from the 80s on Netflix Instant Queue right now about Tesla: The Secret of Nikola Tesla. It's corny and full of bad acting, but it paints a fairly accurate depiction of his life. The drunk history of Tesla is quite awesome, too.

Programming Collective Intelligence Subscriber Reviews Average Rating: Based on 8 Ratings "Useful book on machine learning, etc." - by Alex Ott on 20-JUL-2011Reviewer Rating: YouTube Videos Near Me Use this Google Map to find and watch YouTube videos that were captured at a geographic location near you or any other region on the world map. To get started, drag the red marker and place it anywhere on the Google Map. Use the zoom control on the map to move closer to an area for more accurate results. Internally, this Google Maps mashup computes the latitude and longitude of the point under the marker and then uses the YouTube database to find geo-tagged videos that are within a 2 mile radius of that point.

6 Insane Coincidences You Won't Believe Actually Happened America's Freak Luck During the Battle of Midway The Battle of Midway may be remembered as one of the most spectacular naval battles in history and one of the huge turning points in the Pacific theater, but it started out as a pure clusterfuck for the Americans. Despite going into battle with most of Japan's game plan in their pocket thanks to American codebreakers/Bothan spies, the U.S.

Twimbow - Colored Thoughts The Rainbow vanished Hi folks, today is a sad day here in Twimbowland, 40 Belief-Shaking Remarks From a Ruthless Nonconformist If there’s one thing Friedrich Nietzsche did well, it’s obliterate feel-good beliefs people have about themselves. He has been criticized for being a misanthrope, a subvert, a cynic and a pessimist, but I think these assessments are off the mark. I believe he only wanted human beings to be more honest with themselves. He did have a remarkable gift for aphorism — he once declared, “It is my ambition to say in ten sentences what others say in a whole book.” A hundred years after his death, Nietzsche retains his disturbing talent for turning a person’s worldview upside-down with one jarring remark. 40 websites that will make you cleverer right now The indexed web contains an incredible 14 billion pages. But only a tiny fraction help you improve your brain power. Here are 40 of the best. whizzpast.com – Learn about our awe inspiring past all in one wonderful place.