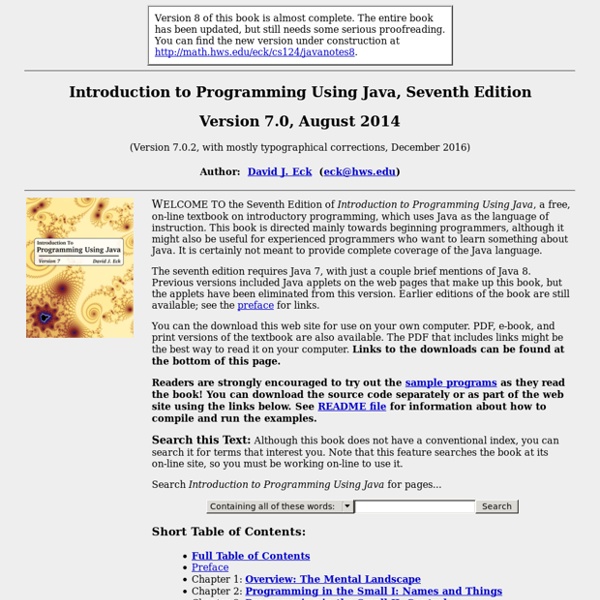 java - the Java application launcher -client Select the Java HotSpot Client VM. A 64-bit capable jdk currently ignores this option and instead uses the Java HotSpot Server VM. For default VM selection, see Server-Class Machine Detection -server Select the Java HotSpot Server VM. Tuning Garbage Collection with the 5.0 Java[tm] Virtual Machine Introduction The Java TM 2 Platform Standard Edition (J2SE TM platform) is used for a wide variety of applications from small applets on desktops to web services on large servers. In the J2SE platform version 1.4.2 there were four garbage collectors from which to choose but without an explicit choice by the user the serial garbage collector was always chosen. In version 5.0 the choice of the collector is based on the class of the machine on which the application is started.

Java theory and practice: Thread pools and work queues Why thread pools? Many server applications, such as Web servers, database servers, file servers, or mail servers, are oriented around processing a large number of short tasks that arrive from some remote source. A request arrives at the server in some manner, which might be through a network protocol (such as HTTP, FTP, or POP), through a JMS queue, or perhaps by polling a database. Java theory and practice: Stick a fork in it, Part 1 Hardware trends drive programming idioms Languages, libraries, and frameworks shape the way we write programs. Even though Alonzo Church showed in 1934 that all the known computational frameworks were equivalent in the set of programs they could represent, the set of programs that real programmers actually write is shaped by the idioms that the programming model — driven by languages, libraries, and frameworks — makes easy to express. In turn, the dominant hardware platforms of the day shape the way we create languages, libraries, and frameworks. The Java language has had support for threads and concurrency from day 1; the language includes synchronization primitives such as synchronized and volatile, and the class library includes classes such as Thread. Going forward, the hardware trend is clear; Moore's Law will not be delivering higher clock rates, but instead delivering more cores per chip.

Java theory and practice: Introduction to nonblocking algorithms When more than one thread accesses a mutable variable, all threads must use synchronization, or else some very bad things can happen. The primary means of synchronization in the Java language is the synchronized keyword (also known as intrinsic locking), which enforces mutual exclusion and ensures that the actions of one thread executing a synchronized block are visible to other threads that later execute a synchronized block protected by the same lock. When used properly, intrinsic locking can make our programs thread-safe, but locking can be a relatively heavyweight operation when used to protect short code paths when threads frequently contend for the lock. In "Going atomic,"we looked at atomic variables, which provide atomic read-modify-write operations for safely updating shared variables without locks. A nonblocking counter