Personal Goal Setting - How to Set SMART Goals - from MindTools.com 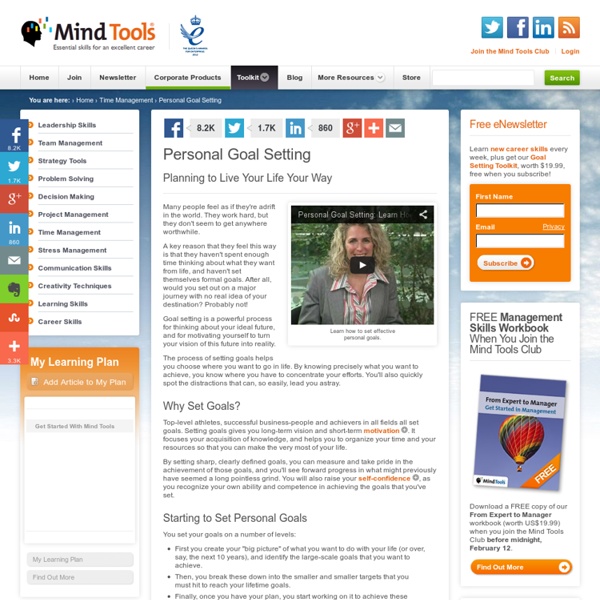 Planning to Live Your Life Your Way Learn how to set effective personal goals. Many people feel as if they're adrift in the world. They work hard, but they don't seem to get anywhere worthwhile. A key reason that they feel this way is that they haven't spent enough time thinking about what they want from life, and haven't set themselves formal goals. After all, would you set out on a major journey with no real idea of your destination? Goal setting is a powerful process for thinking about your ideal future, and for motivating yourself to turn your vision of this future into reality. The process of setting goals helps you choose where you want to go in life. Why Set Goals? Top-level athletes, successful business-people and achievers in all fields all set goals. By setting sharp, clearly defined goals, you can measure and take pride in the achievement of those goals, and you'll see forward progress in what might previously have seemed a long pointless grind. Starting to Set Personal Goals Tip:

The Beginner’s Guide to Goal Setting When I speak publicly, I often ask how many people believe in the power of written goals. Every hand shoots up. Yet when I ask how many of them have written goals for this year, very few hands go up. This always surprises me, given the fact most people know intuitively (and research has proved) that those who write their goals down accomplish significantly more than those who do not write their goals. Some of this, I suppose, is just inertia. But from years as a corporate executive, business coach, and best-selling author on the topic of goal achievement, I know that most people have just never been taught how to write effective goals.

The Resume Is Dead, The Bio Is King If you’re a designer, entrepreneur, or creative – you probably haven’t been asked for your resume in a long time. Instead, people Google you – and quickly assess your talents based on your website, portfolio, and social media profiles. Do they resonate with what you’re sharing? Do they identify with your story? Are you even giving them a story to wrap their head around? one are the days of “Just the facts, M’am.” Goal setting Goal setting involves establishing specific, measurable, achievable, realistic and time-targeted (S.M.A.R.T ) goals. Work on the theory of goal-setting suggests that an effective tool for making progress is to ensure that participants in a group with a common goal are clearly aware of what is expected from them.[citation needed] On a personal level, setting goals helps people work towards their own objectives. Goal setting features as a major component of personal development literature.

The Ultimate Goals Program By now, you probably realize the importance of setting goals. But if you’re like so many people, after an initial month (or even 2 or 3) of serious progress, excitement and motivation, you slowly lose steam … until you’re stagnant in the pursuit of your goals. You started out with great intentions, maybe even a plan. But then you hit a roadblock. Or maybe you got sidetracked. Occupational Outlook Handbook Funeral Directors Funeral directors, also called morticians and undertakers, manage funeral homes and arrange the details of a funeral. view profile » Insurance Underwriters Insurance underwriters decide whether to provide insurance and under what terms. Goal Setting: The Key To Success “Without goals, and plans to reach them, you are like a ship that has set sail with no destination.” -Fitzhugh Dodson Did you know that less than 3 percent of Americans have written goals, and of those who do less than 1 percent review and rewrite their goals on a regular basis? This means that as soon as you start setting goals and reviewing them regularly you’ll be ahead of 99% of the population in terms of the potential to become successful. If you want to accomplish something in life, financial independence for example, and you don’t establish clear and specific goals it’s more like day dreaming than goal setting. Keep Goals and Day Dreaming Separate

The 25 most difficult questions - StumbleUpon If you are one of those executive types unhappy at your present post and embarking on a New Year's resolution to find a new one, here's a helping hand. The job interview is considered to be the most critical aspect of every expedition that brings you face-to- face with the future boss. One must prepare for it with the same tenacity and quickness as one does for a fencing tournament or a chess match. Five Golden Rules for Successful Goal Setting - Goal Setting Tools from MindTools Five Rules to Set Yourself Up for Success Learn five techniques for setting effective goals Have you thought about what you want to be doing in five years' time?