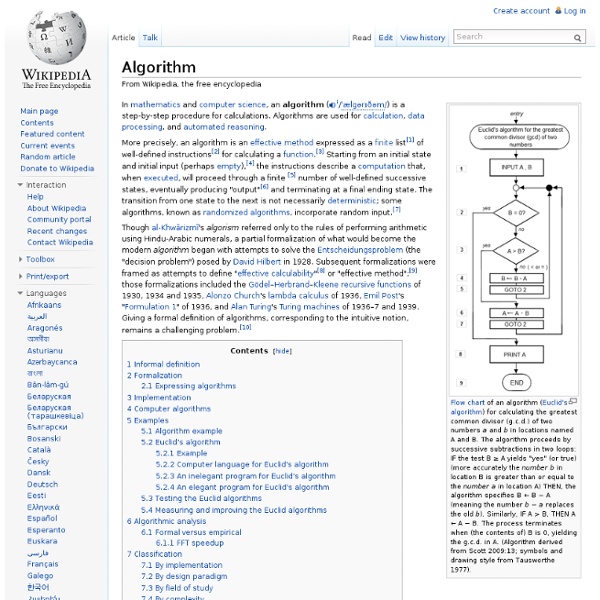 Flow chart of an algorithm (Euclid's algorithm) for calculating the greatest common divisor (g.c.d.) of two numbers a and b in locations named A and B. The algorithm proceeds by successive subtractions in two loops: IF the test B ≥ A yields "yes" (or true) (more accurately the numberb in location B is greater than or equal to the numbera in location A) THEN, the algorithm specifies B ← B − A (meaning the number b − a replaces the old b). Similarly, IF A > B, THEN A ← A − B. The process terminates when (the contents of) B is 0, yielding the g.c.d. in A. (Algorithm derived from Scott 2009:13; symbols and drawing style from Tausworthe 1977). In mathematics and computer science, an algorithm ( i/ˈælɡərɪðəm/ AL-gə-ri-dhəm) is a step-by-step procedure for calculations. Informal definition[edit] While there is no generally accepted formal definition of "algorithm," an informal definition could be "a set of rules that precisely defines a sequence of operations Formalization[edit]

The master algorithm is going to change life as we know it It’s safe to say that most of us probably don’t spend a lot of time thinking about algorithms. We go to Amazon and notice we have new recommendations based on our previous purchases; we see that Netflix has carefully selected movies based on our past preferences. But we don’t necessarily think about what that means, or what’s going on behind the scenes. We probably think most about algorithms when they go awry, whether that’s yet another Facebook faux pas, a stomach-dropping flash crash on Wall Street, or a online shop selling tasteless T-shirts generated entirely by computers. It’s in those moments that we’re reminded just how much of the world runs on algorithms: the sets of rules, increasingly byzantine and incomprehensible to humans, that govern all the computers around us. We’re reminded just how vulnerable we are when algorithms go bad (obligatory Skynet reference here); we’re reminded that their mistakes are not those humans make because, of course, algorithms are not human.

What are the top 10 algorithms every software engineer should know by heart? When you write a code, you basically provide a solution in the form of a program. Algorithms help in reaching a right decision or providing a right solution. Knowledge and intuition regarding algorithms can greatly help you in coding. Even though, every problem is unique but there’re certain algorithms that you can rely on in most cases. Let me list them down for you – - HASHING: Hashing helps in retrieving the items in a complex database easily by simple indexing rather than through original value which takes a lot of time.

New Algorithms Force Scientists to Revise the Tree of Life When the British morphologist St. George Jackson Mivart published one of the first evolutionary trees in 1865, he had very little to go on. He built the tree — a delicately branching map of different primate species — using detailed analysis of the animals’ spinal columns. But a second tree, generated by comparing the animals’ limbs, predicted different relationships among the primates, highlighting a challenge in evolutionary biology that continues to this day. Software Engineering Must Know: Algorithms In part 1 I reviewed must know data structures for software engineers. Part 2 focuses on must know algorithms. This is useful knowledge if you are interviewing at any big tech company or simply want to hone your skills. This list is not meant to be exhaustive, or even to cover all common algorithms you may encounter in an interview or the real world.

3D animation tech puts other peoples' words in celebrities' mouths Researchers at the University of Washington (UW) recently demonstrated how 3D video images of Tom Hanks, Daniel Craig and several other celebrities could be created by piecing together still images and sound bites retrieved from the internet. They also showed how their algorithms could animate those digital models, getting them to say things that were actually said by someone else. The technology relies on advances in 3D face reconstruction, tracking, alignment, multi-texture modeling and puppeteering, which were developed by a research group led by UW assistant professor of computer science and engineering Ira Kemelmacher-Shlizerman.

An improved general E-unification method Bachmair, 1987 L. BachmairProof Methods for Equational Theories Structured program theorem Graphical representation of the three basic patterns of the structured program theorem — sequence, selection, and repetition — using NS diagrams (blue) and flow charts (green). Control flow graphs with 3 types of control structures can compute any computable function The structured program theorem, also called the Böhm–Jacopini theorem,[1][2] is a result in programming language theory. It states that a class of control flow graphs (historically called flowcharts in this context) can compute any computable function if it combines subprograms in only three specific ways (control structures). These are

A Book from the Sky The title is a reference to the 1988 book by Xu Bing, who composed thousands of fictitious glyphs in the style of traditional Mandarin prints of the Song and Ming dynasties. 標題是引用徐冰1988出版的《天書》。在此本，藝術家刻製兩千餘模仿宋明朝的“偽漢字”。 A DCGAN is a type of convolutional neural network which is capable of learning an abstract representation of a collection of images. It achieves this via competition between a "generator" which fabricates fake images and a "discriminator" which tries to discern if the generator's images are authentic (more details). After training, the generator can be used to convincingly generate samples reminiscent of the originals. Genetic programming In artificial intelligence, genetic programming (GP) is a technique whereby computer programs are encoded as a set of genes that are then modified (evolved) using an evolutionary algorithm (often a genetic algorithm - "GA"). The result is a computer program able to perform well in a predefined task. Often confused to be a kind of genetic algorithm, GP can indeed be seen as an application of genetic algorithms to problems where each individual is a computer program. The methods used to encode a computer program in an artificial chromosome and to evaluate its fitness with respect to the predefined task are central in the GP technique and still the subject of active research. History[edit] In 1954, pioneering work on what is today known as artificial life was carried out by Nils Aall Barricelli using the very early computers.[1] In the 1960s and early 1970s, evolutionary algorithms became widely recognized as optimization methods.

What are stack based calculators? Stacks has many applications starting from memory management to real life and it is a fundamental (and simple) data structure that must be understood by every single software engineer. In this article we are going to talk about how arithmetic expressions are evaluated using a Stack. A standard way of writing an arithmetic expression is called infix notation.