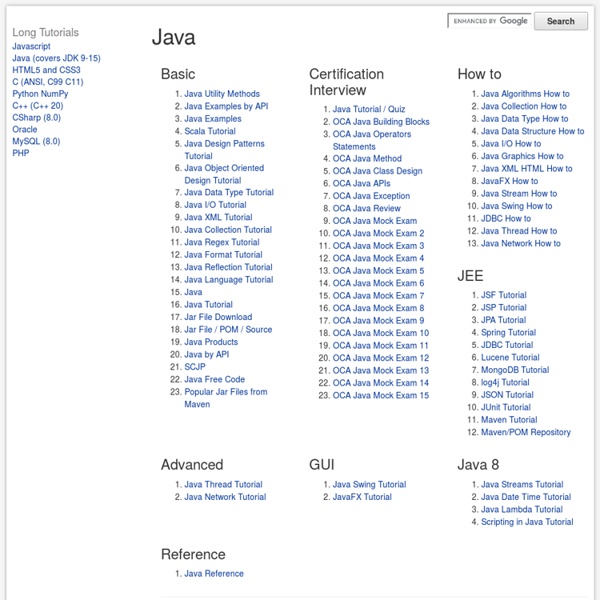 Welcome to the tutorials page Tutorials! The main page has moved! Please update your bookmarks to point to Info about this page! This web page is dedicated to everyone who has ever put together a public domain tutorial/reference. How Browsers Work: Behind the Scenes of Modern Web Browsers Web browsers are the most widely used software. In this primer, I will explain how they work behind the scenes. We will see what happens when you type google.com in the address bar until you see the Google page on the browser screen. The browsers we will talk about There are five major browsers used on desktop today: Chrome, Internet Explorer, Firefox, Safari and Opera. On mobile, the main browsers are Android Browser, iPhone, Opera Mini and Opera Mobile, UC Browser, the Nokia S40/S60 browsers and Chrome–all of which, except for the Opera browsers, are based on WebKit.

Blog Low-cost .com Domains with Whois Privacy In an effort to be more privacy conscious I’ve been looking to transition to having Domain Privacy enabled on all the domains that I own. As it turns out many domain registrars, including my current one, charge an additional fee for this service. In an effort to save some money I did a price comparison […]

SVDLIBC A C Library for Computing Singular Value Decompositions version 1.4 SVDLIBC is a C library written by Doug Rohde. It was based on the SVDPACKC library, which was written by Michael Berry, Theresa Do, Gavin O'Brien, Vijay Krishna and Sowmini Varadhan at the University of Tennessee. Using Adminer to Manage your Databases - LinuxCareer's Documentation Share this post If you find yourself interacting with a database system such as MySQL, PostgreSQL, MS SQL, Oracle, or even SQLite, sometimes you find that some of the tasks you perform are more conveniently executed using a GUI rather then using the default management utility (usually run from a CLI) provided by the database system itself. Some of you may already use other tools such as phpMyAdmin, or phpPgAdmin. This article will talk about another web based database management tool known as Adminer. Adminer allows for the management of all the database systems mentioned above.This article covers Debian (& Ubuntu), Fedora, and ArchLinux. From its website: Adminer (formerly phpMinAdmin) is a full-featured database management tool written in PHP.

The 101 Most Useful Websites on the Internet Here are the most useful websites on the Internet that will make you smarter, increase productivity and help you learn new skills. These incredibly useful websites solve at least one problem really well. And they all have cool URLs that are easy to memorize thus saving you a trip to Google. Also see: The Best Android Apps Also see: The Best Mac Apps and Utilities How Computers Boot Up : Gustavo Duarte The previous post described motherboards and the memory map in Intel computers to set the scene for the initial phases of boot. Booting is an involved, hacky, multi-stage affair – fun stuff. Here’s an outline of the process: Things start rolling when you press the power button on the computer (no!

CS 97SI: Introduction to Competitive Programming Contests Course Information and Announcements Instructor: Jaehyun ParkStanford ACM-ICPC Coaches: Jaehyun Park, Andy Nguyen, Jerry Cain(Added on 8/21/2013) This class was taught in 2011-12 Winter. I'm getting a lot of emails asking if I'm teaching it again, but there is no plan to offer the course at the moment. Lecture slides [Tutorial] Deploy Apache + MySQL + Python on AWS EC2 « 無良心筆記 First, choose any AMI(Amazon Machine Image) you like and lanuch it. In this tutorial, I will choose Amazon Linux AMI (64-bit) as example. If you choose other AMI, the circumstance might be quite different. I can’t guarantee the following tutorial steps are the same. EC2 AMI: Amazon Linux AMI (64-bit) last revision: 2014-08-21 here are the instructions: Paul Grosss Blog - Useful unix tricks - part 2 Update (2/20/09): Check out Useful unix tricks – part 3 and Useful unix tricks – part 4 I covered a bunch of unix command line tricks in my previous blog post: Useful unix tricks. Here are some more. Learn vi Even if you prefer another text editor (such as emacs), it is worth your time to learn vi. vi is installed on every unix box, whereas emacs and others are not.