Getting Started with iOS Development 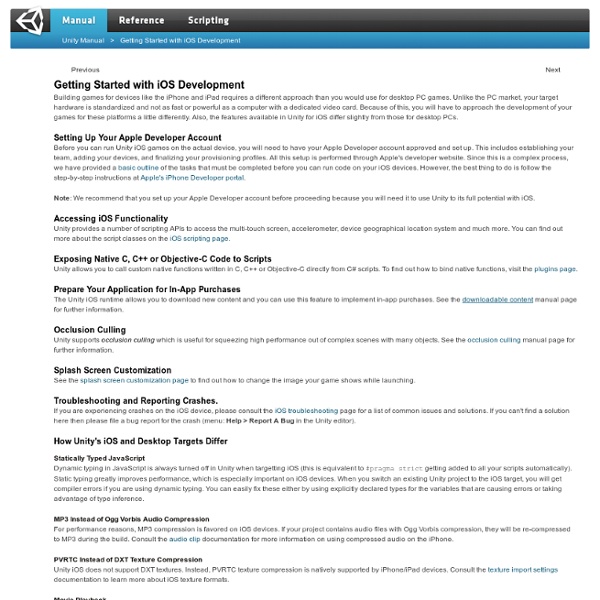 Building games for devices like the iPhone and iPad requires a different approach than you would use for desktop PC games. Unlike the PC market, your target hardware is standardized and not as fast or powerful as a computer with a dedicated video card. Because of this, you will have to approach the development of your games for these platforms a little differently. Also, the features available in Unity for iOS differ slightly from those for desktop PCs. Setting Up Your Apple Developer Account Before you can run Unity iOS games on the actual device, you will need to have your Apple Developer account approved and set up. Note: We recommend that you set up your Apple Developer account before proceeding because you will need it to use Unity to its full potential with iOS. The Unity XCode Project When you build the Unity iOS game an XCode project is generated. Accessing iOS Functionality Exposing Native C, C++ or Objective-C Code to Scripts Prepare Your Application for In-App Purchases

Lighting Problems Exporting C4D to Unity 3D When exporting models from 3D packages such as Cinema 4D to Unity3D sometimes the surface normals aren't always imported properly even if they are defined correctly in your original modeling package. As this is meant to be a quick tip I won't go into explaining surface normals here. At the time of writing this I am using C4D R12 and Unity3D v 3. It's quite possible that some or all of these problems may be different with the next version, but nevertheless if you are having odd lighting problems, first check you normals, if they are OK then play with the FBX output settings for your normals. This would apply to 3D Studio Max and Maya as well. The example shown here is a rendering in Unity3D. When Exporting from almost any 3D package into Unity3D, Unity3D will communicate with the originating software package and tell it to create an FBX output file. I unchecked it and voila!

Unity Book Roundup Unity brings you ever closer to the "author once, deploy anywhere" dream. With its multiplatform capabilities, you can target desktop, web, mobile devices, and consoles using a single development engine. Little wonder that Unity has quickly become the #1 game engine out there. Mastering Unity is absolutely essential in an increasingly competitive games market where agility is expected, yet until now practical tutorials were nearly impossible to find. Creating Games with Unity and Maya gives you with an end-to-end solution for Unity game development with Maya. Written by a twelve-year veteran of the 3D animation and games industry and professor of 3D animation, this book takes you step-by-step through the process of developing an entire game from scratch-including coding, art, production, and deployment. This accessible guide provides a "non-programmer" entry point to the world of game creation. --Unity is HOT!

Lighting difference between standalone and iphone Hi, I'm doing some tests for a project on iphone/ipad and I run across an issue with the lighting in one scene. Basically in the scene there are some areas where I have very bright lights(3-4 in value) because I need those areas to overbright. Everything works fine as long as the building setting is for PC/MAC standalone but when I test the same scene changing the building setting to ios for iphone the lighting changes. At first I thought that it was something wrong with the lightmaps but after further tests I notice that also the vertex lit or diffuse shaders react differently. Here is an example screenshot with the lightbaked scene. hippocoder: thanks, that's what I'm usually doing, but in this case as you can see from my screenshots all shaders are giving me the same color problem. kraemology :have you found a solution to your issue? Posting Permissions You may not post new threads You may not post replies You may not post attachments You may not edit your posts Forum Rules

C4d <-> Unity workflow: any recommendations? This has been a very interesting bit of news. I've been trying for 2 weeks to figure out a flow from C4D into Unity. So far nothing works very well. In fact moving the .c4d file to the assets directory results in this error in Unity's console window: Cinema 4D couldn't convert the .C4D file to an fbx file. Try exporting the .C4D file to an fbx file manually. When I try to export the FBX shaders need to be baked, but it doesn't appear that there is a way to bake all the shaders automatically. I'd be interested to here how anyone got this character moved over. It is best to bake your animations before exporting to Unity. I no longer bother baking lightmaps in C4D. EDIT: To be a little more clear.

Quality Settings Unity allows you to set the level of graphical quality it will attempt to render. Generally speaking, quality comes at the expense of framerate and so it may be best not to aim for the highest quality on mobile devices or older hardware since it will have a detrimental effect on gameplay. The Quality Settings inspector (menu: ) is used to select the quality level in the editor for the chosen device. Unity lets you assign a name to a given combination of quality options for easy reference. You can click on the name of a quality level to select it for editing, which is done in the panel below the settings matrix: The quality options you can choose for a quality level are as follows: MaximumLOD level Models which have a LOD below the MaximumLOD level will not be used and omitted from the build (which will save storage and memory space). Tearing The picture on the display device is not continuously updated but rather the updates happen at regular intervals much like frame updates in Unity.

Textures/Materials and Cinema4D This is fairly general question about Unity itself and optimizing my scene. For the sake of reproducing levels quickly I produced seperate level pieces in C4D: Corridor, Corner, Prison Cell, T-Section etc. All of these use the same textures and materials. When you save a C4D into Unity it imports a materials and textures folder. So i have several Cinema4D imports that have these material and textures folders all holding the same set of 5 or 6 materials (haven't done UV mapping). More generally, what can i do in order to make things easier on Unity. I haven't done a very good job explaining this but it's the best i can do.