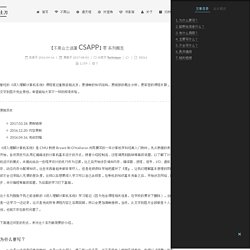 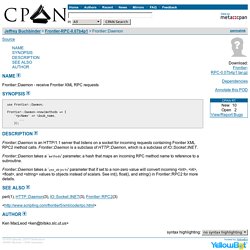 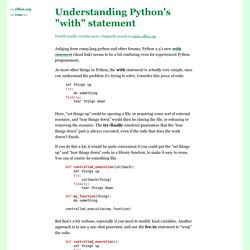 As most other things in Python, the with statement is actually very simple, once you understand the problem it’s trying to solve. Consider this piece of code: set things up try: do something finally: tear things down Here, “set things up” could be opening a file, or acquiring some sort of external resource, and “tear things down” would then be closing the file, or releasing or removing the resource. If you do this a lot, it would be quite convenient if you could put the “set things up” and “tear things down” code in a library function, to make it easy to reuse. Understanding Python's "with" statement. A guide to Python's function decorators.

Python is rich with powerful features and expressive syntax. One of my favorites is decorators. In the context of design patterns, decorators dynamically alter the functionality of a function, method or class without having to directly use subclasses. This is ideal when you need to extend the functionality of functions that you don't want to modify. We can implement the decorator pattern anywhere, but Python facilitates the implementation by providing much more expressive features and syntax for that.

In this post I will be discussing Python's function decorators in depth, accompanied by a bunch of examples on the way to clear up the concepts. Essentially, decorators work as wrappers, modifying the behavior of the code before and after a target function execution, without the need to modify the function itself, augmenting the original functionality, thus decorating it. What you need to know about functions. 跳出面向对象思想(二) 多态 - Casa Taloyum. Django templates · Django Girls Tutorial. Time to display some data! 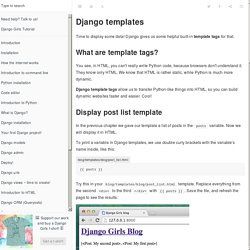 Django gives us some helpful built-in template tags for that. You see, in HTML, you can't really write Python code, because browsers don't understand it. They know only HTML. We know that HTML is rather static, while Python is much more dynamic. Example: Software Architecture Document. A description of the logical view of the architecture. 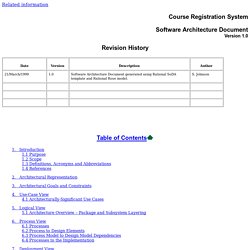 Describes the most important classes, their organization in service packages and subsystems, and the organization of these subsystems into layers. Also describes the most important use-case realizations, for example, the dynamic aspects of the architecture. Class diagrams may be included to illustrate the relationships between architecturally significant classes, subsystems, packages and layers. The logical view of the course registration system is comprised of the 3 main packages: User Interface, Business Services, and Business Objects. The User Interface Package contains classes for each of the forms that the actors use to communicate with the System. The Business Services Package contains control classes for interfacing with the billing system, controlling student registration, and managing the student evaluation. Espymetrics/DESIGN.rst at master · mahmoud/espymetrics. jTopo Demo. $(document).ready(function(){ var canvas = document.getElementById('canvas'); var stage = new JTopo.Stage(canvas); showJTopoToobar(stage); var scene = new JTopo.Scene(); scene.background = '. 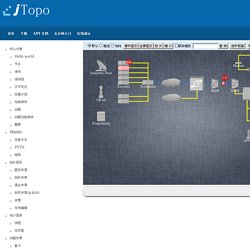 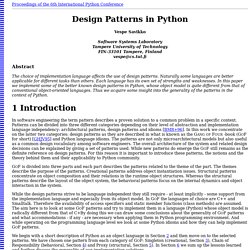 Microservices: The Essential Practices. Before we jump and try to explore the practices we must master in order to successfully implement microservices architecture, let us briefly refresh our understanding of monolithic applications. 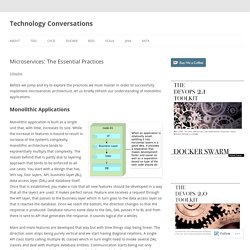 Monolithic application is built as a single unit that, with time, increases its size. While the increase in features is bound to result in increase of the system’s complexity, monolithic architecture tends to exponentially multiply that complexity. The reason behind that is partly due to layering approach that tends to be enforced to all use cases. You start with a design that has, let’s say, four layers; API, business layer (BL), data access layer (DAL) and database itself. Once that is established, you make a rule that all new features should be developed in a way that all the layers are used. More and more features are developed that way but with time things stop being linear. The result is the increase in difficulties we are facing when trying apply changes. Microservices - Full Stack Python. Microservices are an application architecture style where independent, self-contained programs with a single purpose each can communicate with each other over a network. 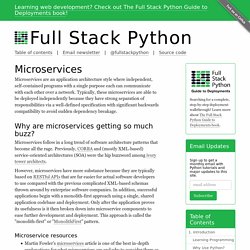 Typically, these microservices are able to be deployed independently because they have strong separation of responsibilities via a well-defined specification with significant backwards compatibility to avoid sudden dependency breakage. Microservices follow in a long trend of software architecture patterns that become all the rage. Previously, CORBA and (mostly XML-based) service-oriented architectures (SOA) were the hip buzzword among ivory tower architects. However, microservices have more substance because they are typically based on RESTful APIs that are far easier for actual software developers to use compared with the previous complicated XML-based schemas thrown around by enterprise software companies. The Netflix Simian Army. We’ve talked a bit in the past about our move to the cloud, and John shared some of our lessons learned in going through that transition in a previous post. 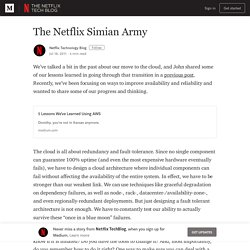 Recently, we’ve been focusing on ways to improve availability and reliability and wanted to share some of our progress and thinking. The cloud is all about redundancy and fault-tolerance. Since no single component can guarantee 100% uptime (and even the most expensive hardware eventually fails), we have to design a cloud architecture where individual components can fail without affecting the availability of the entire system.

In effect, we have to be stronger than our weakest link. Adrian Cockcroft presentations. Cloud Native Architecture at Netflix by Adrian Cockcroft - YOW! 2013. CS140: Operating Systems. CS352 Prerequisites. Throughout the course, I will make certain assumptions about your knowledge. In particular, I will assume the following: You have taken an undergraduate course in operating systems and understand basic operating system concepts such as processes, threads, file system implementation, mutual exclusion, process synchronization, and process scheduling. You can program proficiently in the C or C++ programming language as well as Java.

If you know one, you can learn the other without too much grief. A tutorial that seems pretty good (on casual inspection) on C can be found at I learned C eons ago via Kernighan and Ritchie's text (it was the thinnest book I could find). If you are unfamiliar with any of these items, it should not necessarily deter you from taking the course (most are easy to learn) but you may wish to speak with me. Assignments — Operating Systems. Written assignments must be handed in to the handin bin by 10pm on the given due date. Programs must be handed in by 11:59pm on the given due date For all the Weenix related projects, we will not be posting individual assignment pdfs. Please instead see the docs/ folder in the weenix sources. A copy of the pdf will be posted here for your convenience. Practice Midterms. Traveling Notes: 2011 所得稅心得： ESPP，RSU，與 Turbo tax 初體驗. 又到了麻煩的報稅季節。 Getting Started. RegExr: Learn, Build, & Test RegEx. Electrical Engineering and Computer Science.

Practical tips for using Git with large Subversion repositories. So you want to use Git with Subversion? That’s a great idea! If the Subversion repository is small, you should not have too big problems. If on the other hand the repository is relatively large, you may have quite a few issues. What is large? Let’s define large as: cloning the trunk takes more than 4 hours. Running Kore in production behind nginx proxy - Andreas Pfohl. As written in the last post my primary interrest is writing web applications in C with Kore. The post shows how to create a small application and run it in development mode.

In production there are two methods to run Kore. The first is to run Kore standalone. That means Kore is directly bound to a port on a public IP address. It is no problem to configure Kore that way because it is intended. Job Description - Senior Software Engineer (1500032050) Are you interested in pioneering the next generation of personalization that blends physical and virtual worlds leveraging the richest map data in existence? Do you want to use multiple digital channels, social networks, and real-time predictive analytics at scale to create an in-the-moment location experience that enriches people’s lives? HERE is the leader in the Location Cloud business – the map for the 21st century.

Using cloud infrastructure we are delivering mobile apps and services that help people to solve daily challenges and to make their lives more rewarding. It is our goal to help people live delightful, safer, more fruitful, and more sustainable lives while respecting their privacy by providing the right map, and the right experience, for every moment. Our global reach is unmatched. We’re expanding our team in Seattle to realize this vision, and we are searching for engineers with expertise in big data platforms, machine learning and predictive analytics. Linux下面的C語言使用getopt parse command line參數 « 國王的耳朵是驢耳朵. Simplest Spring MVC Hello World Example / Tutorial - Spring Model - View - Controller Tips. 海量数据处理算法—Bit-Map - guisu，程序人生。 逆水行舟，不进则退。 Page from Begin Programming: Build Your First Mobile Game - University of Reading.

Writing web software in C with Kore. Do things differently. Untitled. 10 sFTP Command Examples to Transfer Files on Remote Servers in Linux. How do I become a data scientist? 应用python编写简单新浪微博应用（一） — 小倩☆惜取花开时. Scraping data from Sina Weibo using Python. How to use the APIs to collect data from Sina Weibo. The Open Source Data Science Masters.