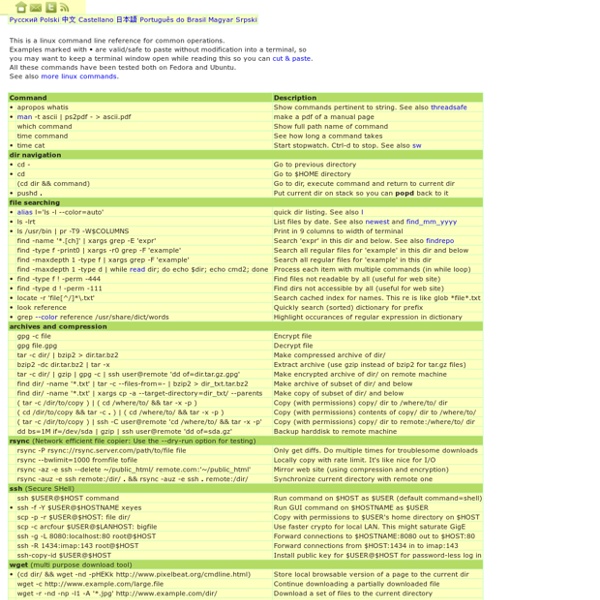 Visual Representation of SQL Joins Introduction This is just a simple article visually explaining SQL JOINs. Background I'm a pretty visual person. Things seem to make more sense as a picture. I looked all over the Internet for a good graphical representation of SQL JOINs, but I couldn't find any to my liking. Beginner's Guide to Nmap Ever wondered how attackers know what ports are open on a system? Or how to find out what services a computer is running without just asking the site admin? You can do all this and more with a handy little tool called Nmap. What is Nmap? Short for "network mapper," nmap is a veritable toolshed of functionality to perform network scans. Basic vi Commands What is vi? The default editor that comes with the UNIX operating system is called vi (visual editor). [Alternate editors for UNIX environments include pico and emacs, a product of GNU.] The UNIX vi editor is a full screen editor and has two modes of operation: Command mode commands which cause action to be taken on the file, and Insert mode in which entered text is inserted into the file.

CSS3 Cheat Sheet (PDF) Advertisement Just last week we released an extensive printable HTML 5 Cheat Sheet that lists all currently supported HTML 5 tags, their descriptions, their attributes and their support in HTML 4. In comments to this post we received many requests for a similar CSS 3 cheat sheet that would present the main features of CSS 3 in a handy, printable reference card. So we asked our friend Chris Hanscom from Veign.com (who created the HTML 5 cheat sheet) to create a quick reference card for CSS 3. Learning the shell. Why do you need to learn the command line anyway? Well, let me tell you a story. A few years ago we had a problem where I used to work. There was a shared drive on one of our file servers that kept getting full. I won't mention that this legacy operating system did not support user quotas; that's another story.

Uninstall Survey Recently I was developing at home, where I do not have Visual Assist; it was so much slower. It was like programming with stone knives and bearskins. Visual Assist has been so good I don't notice it anymore – until I use an IDE without it. Then, I wonder what's wrong with the IDE. David Smith Tyco Electronics Linux Directory Structure (File System Structure) Explained with Examples by Ramesh Natarajan on September 8, 2010 Have you wondered why certain programs are located under /bin, or /sbin, or /usr/bin, or /usr/sbin? For example, less command is located under /usr/bin directory. Why not /bin, or /sbin, or /usr/sbin? What is the different between all these directories? In this article, let us review the Linux filesystem structures and understand the meaning of individual high-level directories.

Syntax Diagrams For SQLite Syntax Diagrams For SQLite Basic SQLite Statements: All SQLite Statements: sql-stmt-list: References: sql-stmt See also: lang.html wget - Downloading from the command line wget - Downloading from the command line Written by Guillermo Garron . Date: 2007-10-30 14:36:30 +0000 Tips and Tricks of wget When you ever need to download a pdf, jpg, png or any other type of picture or file from the web, you can just right-click on the link and choose to save it on your hard disk. Useful Unix commands for data science Imagine you have a 4.2GB CSV file. It has over 12 million records and 50 columns. All you need from this file is the sum of all values in one particular column. How would you do it?

Learning the shell. Why do you need to learn the command line anyway? Well, let me tell you a story. Many years ago we had a problem where I worked. 75 Essential Cheat Sheets for Designers and Programmers 1 Share Share Tweet Email Bash String Manipulation Examples – Length, Substring, Find and Replace In bash shell, when you use a dollar sign followed by a variable name, shell expands the variable with its value. This feature of shell is called parameter expansion. But parameter expansion has numerous other forms which allow you to expand a parameter and modify the value or substitute other values in the expansion process. In this article, let us review how to use the parameter expansion concept for string manipulation operations. This article is part of the on-going bash tutorial series.

PostgreSQL Database Server Configuration in Debian PostgreSQL is a fully featured object-relational database management system. It supports a large part of the SQL standard and is designed to be extensible by users in many aspects. Some of the features are: ACID transactions, foreign keys, views, sequences, subqueries, triggers, user-defined types and functions, outer joins, multiversion concurrency control.