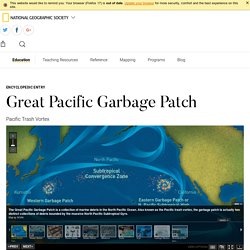 The patch is actually comprised of the Western Garbage Patch, located near Japan, and the Eastern Garbage Patch, located between the U.S. states of Hawaii and California. These areas of spinning debris are linked together by the North Pacific Subtropical Convergence Zone, located a few hundred kilometers north of Hawaii. This Week in Pollution: Plastic chokes an island paradise - and its birds - The Progressive Pulse. SCENE from The Graduate: Two men chat poolside at a party, one a recent college graduate, Benjamin Braddock, the other a friend of his parents, Mr. 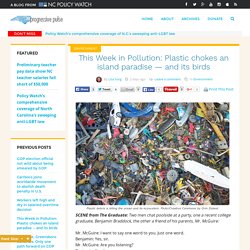 McGuire: Mr. Bioplastics industry continues to expand despite low oil prices. The bioplastics industry is continuing to see stable growth despite falling oil prices, representing a positive shift in business attitudes towards manufacturing low-carbon, resource-efficient products. and a lack of stronger political support to realise the potential of bio-based materials in Europe. 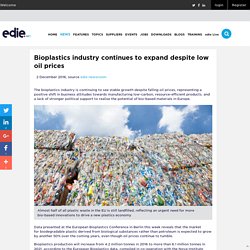 Is Climate Change Killing the Seasonality Of Fashion Apparel Retailing? – WWD. The heat is on. 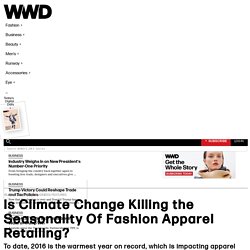 The weather has been a popular topic, particularly in the Northeast this week, as temps have returned to the balmy 80s. Ugly fruits and vegetables: why you have to learn to love them. King-sized kiwis, curvy squash and smaller-than-usual apples and limes. 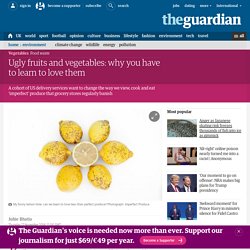 That was the “ugly” produce count in boxes of fruits and vegetables Deborah Levine recently received at her home in the San Francisco Bay Area. While most of the produce she gets in her biweekly deliveries is “very normal”, she recalls one particular veggie. It was like a siamese carrot, but with part of it broken off, it looked like it “didn’t have its leg”.

“It was kind of funky looking. But you clean it, peel it and chop it up and it makes no difference,” says Levine, who works as an editor. Since August, Levine has been getting deliveries of imperfect or “ugly” fruits and vegetables, those that taste fine but are often banished from grocery stores because they don’t meet industry’s cosmetic standards. It’s one way to fight back against the massive amounts of food wasted in the United States. Half of all US food produce is thrown away, new research suggests. Americans throw away almost as much food as they eat because of a “cult of perfection”, deepening hunger and poverty, and inflicting a heavy toll on the environment. 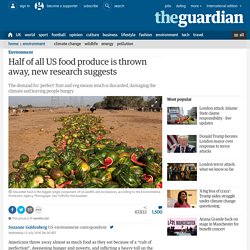 Vast quantities of fresh produce grown in the US are left in the field to rot, fed to livestock or hauled directly from the field to landfill, because of unrealistic and unyielding cosmetic standards, according to official data and interviews with dozens of farmers, packers, truckers, researchers, campaigners and government officials. Adidas creates trainers made out of ocean waste in effort to reduce plastic in waters around world. Sainsbury's invests another £1m in battle against food waste.

The Big Food Rescue: BBC series to follow food waste charity. Work to set up food redistribution charity The Felix Project will be featured in a BBC series kicking off next week. 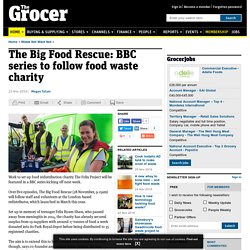 Over five episodes, The Big Food Rescue (28 November, 9.15am) will follow staff and volunteers at the London-based redistributor, which launched in March this year. Waste to landfill rises in England. The amount of waste sent to landfill sites in England rose in 2015 – data published by the Environment Agency has indicated. 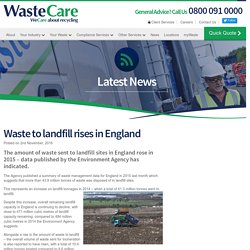 The Agency published a summary of waste management data for England in 2015 last month which suggests that more than 43.9 million tonnes of waste was disposed of in landfill sites. This represents an increase on landfill tonnages in 2014 – when a total of 41.3 million tonnes went to landfill. Despite this increase, overall remaining landfill capacity in England is continuing to decline, with close to 471 million cubic metres of landfill capacity remaining, compared to 484 million cubic metres in 2014 the Environment Agency suggests.

Huge rise in household recycling sent to landfill. The amount of household waste rejected for recycling has increased by more than 80 per cent over the past four years, raising questions about how simple it is for people to identify material that can be reused. 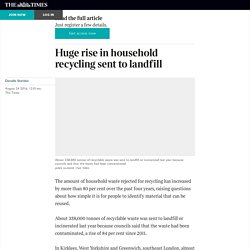 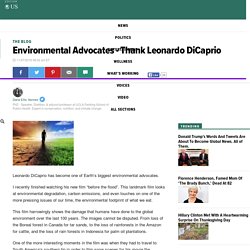 I recently finished watching his new film “before the flood”. This landmark film looks at environmental degradation, carbon emissions, and even touches on one of the more pressing issues of our time, the environmental footprint of what we eat. This film harrowingly shows the damage that humans have done to the global environment over the last 100 years. Global Warming Melts Polar Ice To Record Lows As Temperatures Rise Under Climate Change Effects. They are quite literally poles apart but both the North Pole and the South Pole have something unfortunate in common at the moment: They are both seeing the lowest levels of sea ice since modern record-keeping began.

News about the Arctic sea ice being at its lowest level ever for this time of the year — it hits its minimum in September and starts to build up again in October as the six-monthlong polar winter sets in — came a few days ago. Temperatures near North Pole are said to be 36 degrees higher than normal for this time of the year, and the sea ice level — which has fallen by about half since records began in 1979 — is lesser than its previous low of 2012.

Brexit uncertainty will hold UK GDP growth back, says OBR. Weaker business spending and a squeeze on consumers from higher inflation will dent the UK economy next year, but warnings for a post-referendum recession should prove unfounded, according to the government’s independent forecasters. The Office for Budget Responsibility was forced to revise down its prediction made before the Brexit vote that GDP would rise 2.2% next year. Subscribe to read. Premium Digital All the benefits of Standard Digital, plus: Unlimited access to all content Instant Insights column for comment and analysis as news unfolds FT Confidential Research - in-depth China and Southeast Asia analysis ePaper - the digital replica of the printed newspaper Full access to LEX - our agenda setting daily commentary Exclusive emails, including a weekly email from our Editor, Lionel Barber Full access to EM Squared- news and analysis service on emerging markets Standard Digital Limited Time Offer Access to FT award winning news on desktop, mobile and tablet Personalised email briefings by industry, journalist or sector Portfolio tools to help manage your investments FastFT - market-moving news and views, 24 hours a day Brexit Briefing - Your essential guide to the impact of the UK-EU split Premium Digital Trial.