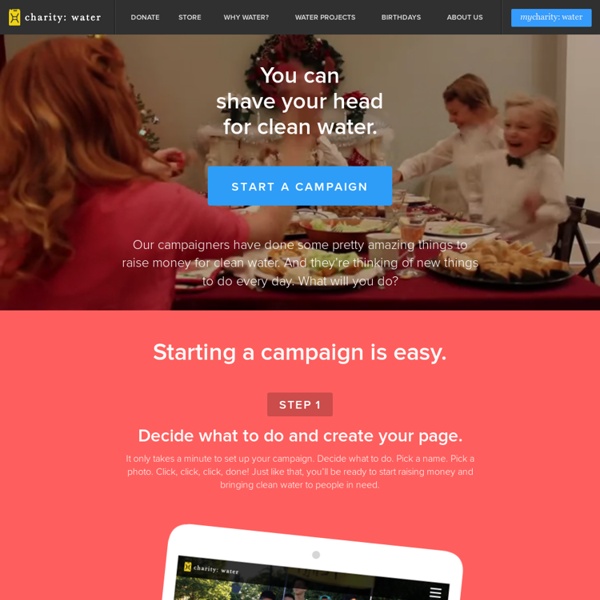 a child's right We are thrilled to announce that, as of October 10, 2012, A Child’s Right is operating under a new name: Splash. We want to assure you that, even though our name is different, nothing about who we are or what we do is changing. Our mission, values, core work model, partners, staff, and plans for future growth remain the same. Why Splash? The Earth Institute at Columbia University Exploring Science in the Field from Pole to Pole Company Donates 330,000 Bed Nets to Help Fight Malaria in Africa Lords of the Past Ancient Rocks, Modern Problem Sustainability Management Alum Works to Bring Electric Vehicles to NYC Pajama Program Our Mission Pajama Program provides new pajamas and new books to children in need, many of whom are waiting and hoping to be adopted. These children live in various situations including group homes, shelters and temporary housing facilities and are shufﬂed often from one place to another. Many of them have been abandoned, abused or neglected.

Social Performance At Kiva, we want to create good in the world. A lot of good. One way that we try to maximize the good created through Kiva is by partnering with organizations that go above and beyond to generate positive outcomes for the communities they serve. This is called social performance. Different organizations have different social performance strengths. Hungry for Solutions: Can the Youth Fix the Future? On a recent late summer morning in Portland, Oregon, I walked past the downtown farmers' market, where vendors were setting up their lush displays of fruits and vegetables. Food was on my mind, but for a different reason. I was on my way to a forum for young people about how they could help fight world hunger. The Mercy Corps, a global humanitarian organization headquartered in Oregon, hosted the Portland Youth Summit as part of its Global Citizens Corps. According to Erin Thomas, who served with the Peace Corps before working with Mercy Corps, the organization is increasingly looking to young people to help find solutions for global problems such as hunger. "We need your ideas to solve these problems," she told the audience of teens and young adults.

Our Mission – Model High-Impact Entrepreneurs create thriving companies that employ hundreds, even thousands of people, and generate millions in wages and revenues. And they have the power to inspire countless others as leading role models. Together, these entrepreneurs hold the key to sustained economic growth in emerging markets. Want to Build a New App? There's an App for That, Too Competition in Apple’s App Store is so tough that even strong concepts must be planned to perfection before any development should start. So enter App Cooker: A hot new iPad app that makes sure other apps have the right ingredients in place before any development begins. App Cooker ($19.99) from Sophia-Antipolis, France-based Hot Apps Factory helps aspiring designers organize, plan and get app projects ready for production. 30-year-old Xavier Veyrat — the designer of App Cooker — spoke to Mashable about the development of the platform and the steps that go into creating a masterpiece app recipe.

The art of the bootstrap [Editor's note: With the economic downturn drying up venture capital in Silicon Valley and elsewhere, more early-stage companies will be forced to bootstrap their way to profitability. But what does that actually mean for the companies who go this route? Javier Rojas, managing director of equity capital firm Kennet Partners, offers his insights.] Times being what they are, it’s encouraging to know that some of the world’s leading public companies got to where they are without taking any early venture capital funding. That’s right, Microsoft, Dell, Cisco, Oracle, eBay — they all “bootstrapped” it. Others, like Siebel Systems, Checkpoint Software, Broadcom and dozens of others, have followed their examples to success.

The Ultimate Guide To Using iPads In The Classroom How Students Benefit From Using Social Media 14.60K Views 0 Likes A lot of criticism has been leveled at social media and the effect it has on the way students process and retain information, as well as how distracting it can be. abstract critical Newcomer Awards 2011 Newcomers announced LONDON.-abstract critical announced the five artists from the 2011 degree shows nationwide who have been selected to participate in the abstract critical Newcomer Awards: • Zara Idelson (Glasgow School of Art) • Katy Kirbach (RA Schools) • Dan Roach (University of Gloucestershire) • Jack Sutherland (UCA Canterbury) • Gwennan Thomas (Wimbledon College of Art) This is the inaugural year of the prize, offering graduate artists from the 2011 degree shows an opportunity to exhibit alongside the five established artists who selected them. Phillip Allen, Carol Robertson, Iain Robertson, Alan Shipway and Gary Wragg toured shows nationwide to select their chosen graduate.

The St. Cuthbert Gospel: 1,300 Years Old, And Looking Pretty Good hide captionThe Gospel, buried with St. Cuthbert in 698, was recovered from his grave in 1104. Its beautiful red leather binding is original. Courtesy of the British Library Diane Arbus & William Eggleston Cheim & Read has two great photo exhibits happening concurrently - Diane Arbus' In the Absence of Others and William Eggleston's 21st Century. Arbus' black and white photographs feature "empty interiors and artificial landscapes spanning the 60s" while Eggleston's recent works focus on color and composition in interior and exterior scenes shot in Cuba, California, Paris, Memphis, New Jersey, and Queens. Diane Arbus (1923-1971), best know for her documentary portraits of people from the margins of society like carnival performers, nudists, transvestites, and the institutionalized, created intensely intimate images infused with an air of mystery and melancholy.

Collections Search Center, Smithsonian Institution What interests you at the Smithsonian? Find items in the exhibits now. For example: Civil War, Buddhism, African Masks, or Amelia Earhart. Please note that this search does not currently include items from the National Museum of American History or the National Museum of Natural History. Browse by Category Find out what's included under each category.