GOOD FOR A LAUGH

8 Unlikely Animal Friendships. Garfield minus garfield. The Saga of Bloodninja. Convention Crowd Really Hoping Bill Clinton Breaks Tension With Joke About How Terrible He Looks. PHILADELPHIA—Waiting anxiously for the former president to address what was clearly on the minds of everyone in attendance, sources in the Democratic National Convention audience Tuesday night expressed hope that Bill Clinton would break the tension during his speech with a joke about how utterly awful he looks. 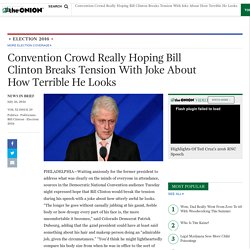 “The longer he goes without casually jabbing at his gaunt, feeble body or how droopy every part of his face is, the more uncomfortable it becomes,” said Colorado Democrat Patrick Dubourg, adding that the 42nd president could have at least said something about his hair and makeup person doing an “admirable job, given the circumstances.” I Put On A Fat Suit To Understand What It’s Like. As a thin, conventionally attractive woman, there’s no denying that society affords me privileges that aren’t extended to everyone. 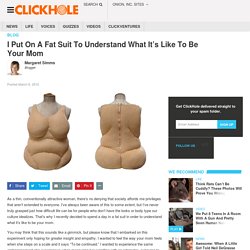 The Four Horsemen of Gentrification. Then I saw when the Landlord broke one of the rent-controlled seals. 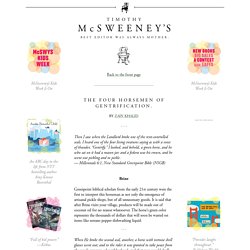 I heard one of the four living creatures saying as with a voice of thunder, “Gentrify.” I looked, and behold, a green horse, and he who sat on it had a mason jar; and a fedora was his crown, and he went out pickling and to pickle. Fucking white people. Grandma needs a new porcelain vase. Spidey. Pornhub & Snowzilla. Hey Arnold characters as teenagers. Very Accurate Summary of Pawn Stars. How to chose your next pet. 7 Memes That Went Viral Before The Internet Existed. The Average Asian Aging Process. Zoo in China tries to pass off dog as a lion and rats as snakes. A zoo has landed itself in hot water after trying to pass off fluffy dogs as lions and rats as snakes. 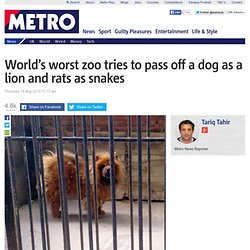 A clearly-marked sign claimed an animal in one of the cages was an African lion but visitors became infuriated when it was clear a chow chow dog was inside instead. Visitor Liu Wen said: ‘I had my young son with me so I tried to play along and told him it was a special kind of lion. Ryan Gosling Not Eating Cereal Must Be Seen By Everybody. Since it was launched by Twitter in January, it’s taken a while for Vine to find its feet — but anyone who’s closely watching will have noticed its growth. 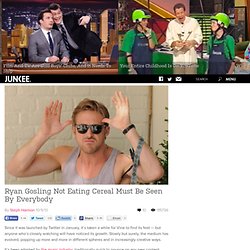 Slowly but surely, the medium has evolved, popping up more and more in different spheres and in increasingly creative ways. It’s been adopted by the music industry, traditionally quick to pounce on any new content delivery system. It’s also proven a useful tool in the fashion world, and comedians are having a crack at it too. Thanks to Vine, we were able to watch Kanye crowd test his new material this week, and we very much enjoyed Roseanne Barr being Roseanne Barr – and at the end of last month, Tribeca Film Festival announced the winners of their inaugural ’6 Second Film’ competition, with 40 finalists whose work was startling, entertaining, and occasionally quite beautiful. 24 Funniest Yearbook Photos. Nigel Thornberry's Face on Disney Princesses. Nigel Thornberry is back again. 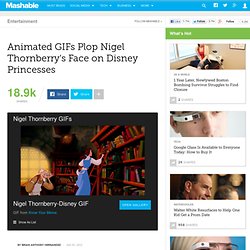 In what seems like an ongoing theme for The Wild Thornberrys character, Nigel keeps re-emerging on TV or online even though the show's original run ended in 2004. This time, poppa Thornberry makes a comeback as an animated GIF. The new GIF meme — swapping the faces of Disney characters with Nigel's face — began with Miryuu Chan's Tumblr post, which now has more than 63,000 “likes” and reposts since Jan. 21. Asian Tattoos Translated. Honest Company Slogans.

Abercrombie asks 'The Situation' to shop elsewhere. NEW YORK (AP) — The Situation doesn't usually require a lot of motivation to lose the shirt. 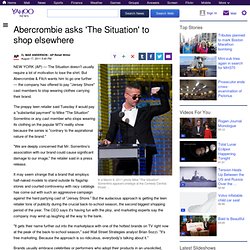 But Abercrombie & Fitch wants him to go one further — the company has offered to pay "Jersey Shore" cast members to stop wearing clothes carrying their brand. The preppy teen retailer said Tuesday it would pay a "substantial payment" to Mike "The Situation" Sorrentino or any cast member who stops wearing its clothing on the popular MTV reality show because the series is "contrary to the aspirational nature of the brand.

" "We are deeply concerned that Mr. Sorrentino's association with our brand could cause significant damage to our image," the retailer said in a press release. It may seem strange that a brand that employs half-naked models to stand outside its flagship stores and courted controversy with racy catalogs has come out with such an aggressive campaign against the hard partying cast of "Jersey Shore. " Harry Potter vs. Lord of the Rings: The Final Showdown. 15 People That Look EXACTLY The Same In Every Photo. 15 People That Look EXACTLY The Same In Every Photo Now the hairstyles, locations, outfits and fake tans might change - but there's one thing that doesn't and that's the expression of these 15 people. 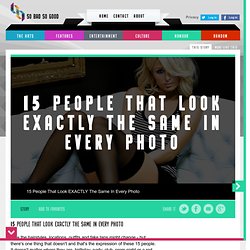 It doesn't matter where they are, birthday, party, club, prom night or a red carpet event - it's all one and the same. On the positive, you don't have to worry about looking bad when you're inevitable tagged on Facebook, the negative? Movies, like a sir.