No Man Might Buy or Sell - A New Economic Order - Get Out of the Cities Part 3 of 3. The Judgments are Falling - "REMEMBER...the JUDGMENTS" ATJ creation evolution.

David Gates - Prepare NOW For The Final Battle. "The Fourth Decree" Pastor Ivor Myers. GC.pdf. THE GREAT CONTROVERSY. Sunday Laws: The Prediction & the 1880's. 1 2 3 4 5 Next > The National Sunday Law The Prediction Ellen White not a few times predicted that Sunday worship would one day be enforced by law, and that obedience to the fourth commandment would be prohibited. 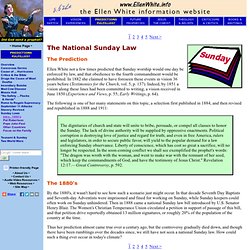 In 1882 she claimed to have foreseen these events in vision 36 years before (Testimonies for the Church, vol. 5, p. 137). Indeed, by 1851 a vision along these lines had been committed to writing, a vision received in June 1850 (Experience and Views, p. 55; Early Writings, p. 64). The following is one of her many statements on this topic, a selection first published in 1884, and then revised and republished in 1888 and 1911: The 1880's By the 1880's, it wasn't hard to see how such a scenario just might occur. Thus her prediction almost came true over a century ago, but the controversy gradually died down, and though there have been rumblings over the decades since, we still have not seen a national Sunday law.

Christian & Church History. History Of The Church. Go Forward - Full Documentary. THE FIRST ANGEL'S MESSAGE: THE EVERLASTING GOSPEL. THE THIRD ANGEL'S MESSAGE: The Mark of the Beast 666. Revelation_ The Bride, the Beast & Babylon (2013) 720p. The Blueprint by Pastor Ivor Myers. How Readest Thou - Chris Hudson. The Fire and the Furnace - Chris Hudson. Sunday Law News Update - National Sunday Law. Sunday Law News Update Trade and Industry Board Members Support Sunday Rest Bill as Shops Close in Argentina (April 2014) "Members of the Board of the Centre for Trade and Industry (CCI), showed their commitment to bill submitted by the legislator Julian Moon through which the closure of shops on Sundays is sought to ensure, in this manner, the rest of the workers ... 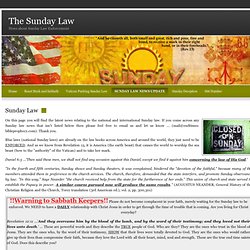 We are extremely pleased to promote the closure of shops on Sunday, a move that will be the basis to recover the values ?? Of harmony, solidarity and respect among the members of our people ... It is important to recover the Sunday rest to humanize working relationships, revitalize family relationships, encourage spiritual life and give back to society the ability to enjoy their free time, so we welcome the provincial legislature concerned this point. 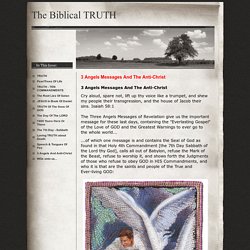 Isaiah 58:1 The Three Angels Messages of Revelation give us the important message for these last days, containing the "Everlasting Gospel" of the Love of GOD and the Greatest Warnings to ever go to the whole world... ...of which one message is and contains the Seal of God as found in that Holy 4th Commandment [the 7th Day Sabbath of the Lord thy God], calls all out of Babylon, refuse the Mark of the Beast, refuse to worship it, and shows forth the Judgments of those who refuse to obey GOD in HIS Commandments, and who it is that are the saints and people of the True and Ever-living GOD: [1. And I saw another angel fly in the midst of heaven, having the everlasting gospel to preach unto them that dwell on the earth, and to every nation, and kindred, and tongue, and people, Revelation 14:6 [2. . [3. What does this term even mean? Who Is The Antichrist. 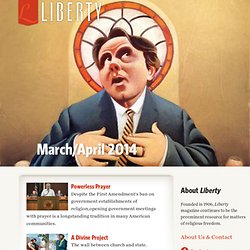 Clause and Effect Charles Pinckney, Religious Liberty, and the United States Constitution. Holy Land Blues In the hostile atmosphere of Israel/Palestine, liberty and tolerance are losers all around, and religion is part of the unpleasant mix. Back to Top. SUNDAY LAW IS COMING. Sunday Laws? 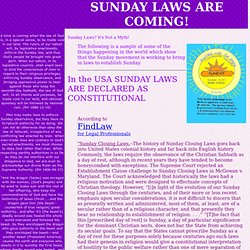 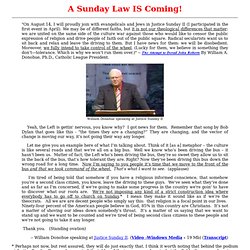 "On August 14, I will proudly join with evangelicals and Jews in Justice Sunday II (I participated in the first event in April). We may be of different faiths, but it is not our theological differences that matter: we are united on the same side of the culture war against those who would like to censor the public expression of religion and drive people of faith out of the public square. Radical secularists want us to sit back and relax and leave the driving to them. But I have news for them: we will be disobedient. When Is Sabbath. Sabbath, The 7th Day. Revelation: The Bride, The Beast & Babylon. King Nebuchadnezzar ,The Forgotten Dream. The forgotten Dream - Documentary. The Most Incredible Prophecy.