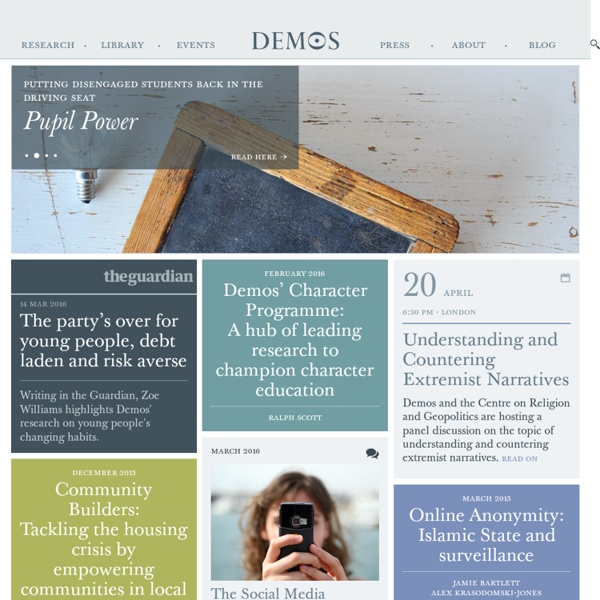 An unpalatable truth Britain's increasing reliance on food banks has grabbed the headlines, but are they a sustainable solution? Jo Salter investigates the alternatives, and introduces a new Demos project looking at how community supermarkets could be a better response to food poverty. Read the blog. Read about the project. Counting the cost

Human "Footprint" Seen on 83 Percent of Earth's Land Hillary Mayell for National Geographic News October 25, 2002 Scientists have produced the first map that traces human influence on the natural world, and the numbers are big. Overall, 83 percent of the total land surface and 98 percent of the areas where it is possible to grow the world's three main crops—rice, wheat, and maize—is directly influenced by human activities. "Yes, humans have a huge influence on the Earth's ecosystems," said Eric Sanderson, a landscape ecologist with the Wildlife Conservation Society and one of the co-authors of the study.

The Network of Global Corporate Control Abstract The structure of the control network of transnational corporations affects global market competition and financial stability. So far, only small national samples were studied and there was no appropriate methodology to assess control globally. We present the first investigation of the architecture of the international ownership network, along with the computation of the control held by each global player. SILK For the past couple of years we've been working on the Kent Dementia Friendly Communities project. Covering the whole of Kent the project has inspired local community projects and dementia action alliances to form. The past few months we've been hard at work creating a website that captures all the activity that has happened under the Kent Dementia Friendly Communities project.

List of cognitive biases Systematic patterns of deviation from norm or rationality in judgment Cognitive biases are systematic patterns of deviation from norm and/or rationality in judgment. They are often studied in psychology, sociology and behavioral economics.[1] Us Now Us Now is a documentary film project "about the power of mass collaboration, the government and the Internet"[1] The New York Times describes it as a film which "paints a future in which every citizen is connected to the state as easily as to Facebook, choosing policies, questioning politicians, collaborating with neighbours."[2] The documentary weaves together the perceptions of leading thinkers on the power of the web, with the overriding suggestion that people gain a sense of satisfaction from active participation rather than symbolic representation in decision-making processes.[3] (Rebecca Frankel, editor of Channel 4's FourDocs) Synopsis[edit] The Us Now website describes the project as an examination of the role of the internet, and more specifically Web 2.0 in facilitating direct public governance without the need for politicians.

11 ways you are thoroughly (but interestingly) wrong The folks at Your Logical Fallacy Is have compiled a list of 24 common ways that you and I are often mistaken in the way we think. I have to say that looking through their site is perhaps the most fun I’ve ever had being told how wrong I am. And not just wrong in a certain instance, but consistently and fundamentally flawed in the very way I think. Fun, right? news « thinkpublic Looking for thinkpublic? We’re taking a pause, as our founding director Deborah is going on maternity leave from September 2012. We’ve learnt from many of our projects with new mums and children’s services, that starting a family can be like starting a business, extremely consuming in both time and energy. Which is why we are finishing off our current projects and pausing the work of the studio, we see this time as a chance to focus on a few initiatives, whilst feeding our imaginations.

8 Books For a Higher Existence Books are magical inventions. By carrying meaning, they gives us glimpses of experience and knowledge from a different world. Phonetic language, being cut-off from time and place, the Now, helps both to encapsulate the ego more, but also to offer guidance to make it poriferous, letting Eros free. Without books we would lose this guidance.

Nate Hagens: The End of Growth Nate Hagens: The End of Growth length: 50:49 credit: ontheearthproduction Energy Hub, WUD Society and Politics Committee, and Madison Peak Oil Group host energy/finance expert Nate Hagens for a presentation that weaves together economics, anthropology, psychology, finance, trade, energy and human behavior into a coherent story about our human social system. In a visual synthesis using pictures and paintings instead of charts and graphs, Nate uses biophysical first principles to explain how our human economy really works, and how we achieved enormous success over the past two hundred years.

Nowtopia: A new politics of work Nowtopia is a book about a new politics of work. It profiles tinkerers, inventors, and improvisational spirits who bring an artistic approach to important tasks that are ignored or undervalued by market society. Rooted in practices that have been emerging over the past few decades, Nowtopia’s exploration of work locates an important thread of self-emancipatory class politics beyond the traditional arena of wage-labor. Outlaw bicycling, urban permaculture, biofuels, free software, even the Burning Man festival, are windows into a scarcely visible social transformation that challenges politics as we know it. Blog: The power of effective activism The power of persuasion for making a difference is often underappreciated. If you can convince just one other person to care about a cause as much as you, then you’ve easily doubled your impact. But peoples’ efforts at influencing others often aren’t as efficient as they could be. Just as people tend to give to the charity that resonates with them most personally, they often spend years trying to convince friends or family of a cause they care about. What many people don’t realise is that by stepping outside your circle of personal contacts and choosing a strategic approach, your time and influence can go ten or even a hundred times further. Triple your impact in an hour

Propaganda 2.0 and the rise of 'narrative networks' DARPA, the Pentagon's advanced concepts think-tank, is looking to take propaganda to the next level and they're hoping to do so by controlling the very way their targets perceive and interpret the flow of incoming information. The Pentagon believes that by engaging in 'narrative control' they can alter an individual's grasp on reality and the way in which they evaluate current events. Simply put, DARPA is looking to shape minds with stories. Now, this isn't an entirely new concept. The notion of narrative control, or narrative networks, has been bunted around for a few years now. It's been said that history books are written by the victors.