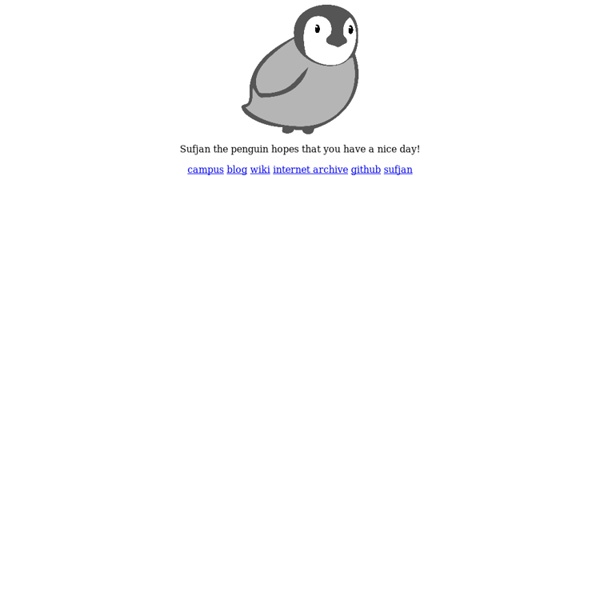 OpenHatch is a non-profit dedicated to matching prospective free software contributors with communities, tools, and education. We provide online tools for new contributors We organize and support outreach events Open Source Comes to Campus Through workshops at colleges, we teach the next generation of students how to participate in open source communities. In-Person Event Handbook We share advice on running successful sprints, hackathons, and workshops with new contributors to open source projects. Affiliated Events We help organizers run outreach events, including workshops with Python user groups to improve their gender diversity.

Intro Projects · plt/racket Wiki This page lists Racket projects which are feasible for people who don't have a lot of experience with the Racket code base. They're mostly small, self contained, and would be extremely useful. Some involve writing a new library that would be useful to lots of other people, and some help fix or clean up some aspect of the existing Racket code base. The best place to ask for help with any of these is on the users mailing list. How to Think Like a Computer Scientist — How to Think like a Computer Scientist: Interactive Edition This interactive book is a product of the Runestone Interactive Project at Luther College, led by Brad Miller and David Ranum. There have been many contributors to the project. Our thanks especially to the following: This book is based on the Original work by: Jeffrey Elkner, Allen B.

How to Make a Resume If You've Never Had a Job Many people think of a resume as a listing of previous job experience---a challenge for someone who's never held a job. Nevertheless, many potential employers request a resume along with your job application. If you've never held a job, your resume should focus more on what you know than where you've worked. This kind of resume, known as a functional resume, highlights experiences and skills that will enable you to do the job for which you're applying. Make a list of your strengths. You'll want to emphasize these in your resume and focus on past experiences that highlight these strengths. Cascade Failure - Chubby Funster Description: Cascade Failure is a post-apocalypse future RPG. Set in the aftermath of a devastating war that collapsed the interstellar economy, Cascade Failure is a survival RPG that casts the characters out into a dangerous and hostile universe. The game is built on a rugged OGL chassis that is melded with a variety of new subsystems to round out your character. You can jump into unique character classes like the Kinetic that can move objects with their mind or into a unique alien species like the insectoid Sahael with a hardened exoskeleton and powerful mandibles for biting attacks. The Cascade Failure universe was once rich with technology and as a survivor you will struggle to bring it back online.

Donjon Welcome to Donjon! Either you've played role-playing games before and have decided to check out this one, or by some chance, this is the first role-playing game you've ever come across. Either way, read on. Donjon is a rip-roaring, make-it-up-as-you-go-along game of bashing down doors, exploring dark dungeons (or donjons, as we like to call them), killing monsters, finding loot, and saving the day. It's a fantasy role-playing game because you, the player, play the part of a fictional character in a fantastic world. (You get to play lots of characters if you're the GM.) Tunnels & Trolls - Rules (This is an abbreviation of the full Tunnels & Trolls Rules) The Tunnels & Trolls solitaire games provide the means for you to play the part of an adventurous hero in mystical, magical times. Such an adventurer seeks wealth, fame and glory in ancient citadels filled with monsters and treasures galore.

Everyone is John A competitive roleplaying game for three or more people. Everyone is John is a humorous, competitive roleplaying game about playing the various personalities of John, an insane man from Minneapolis. One participant is the GM, or, in Everyone is John lingo, "Everyone Else." All of the other players are Voices in John's head. FDIC Money Smart Information Booth Knowing what expenses are flexible and what expenses are fixed is the first step to successfully managing your personal finances. This worksheet will help you to decide where you can be flexible each month. How to Use the Income and Expenses Worksheet Recording Your Income: Record your income in the left column. As you can see from the example below, there are spaces on your worksheet for other incomes sources that might fit your personal situation, such as alimony, child support, and social security.