How to give a great speech » Self Improvement Blog - BrianKim.ne 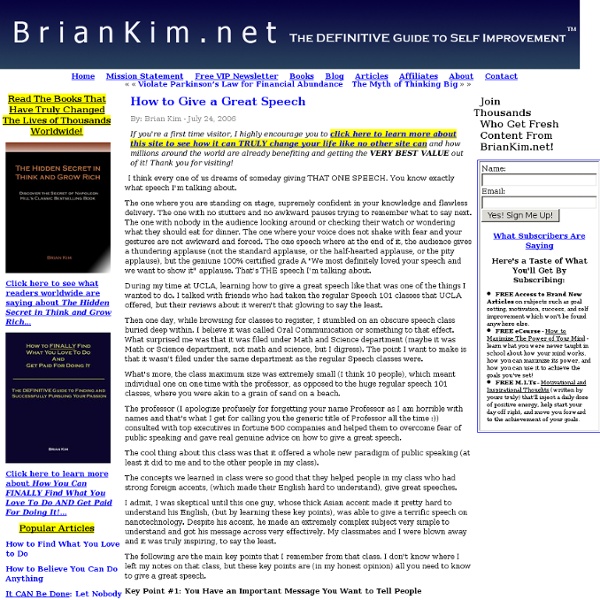 Mayor Papas Eulogizes James Bone American Rhetoric: Movie Speech "City Hall" (1996) Mayor Pappas' Eulogy for James Bone Audio mp3 delivered by Al Pacino Reverend: Sisters, brotheren: The Mayor of the City of New York, the Honorable John Pappas. Mayor Pappas: (Thank you, Reverend.) The first and perhaps only great mayor was Greek. There was a palace that was a city. That's why I ask you now to join me. I am with you, little James. I am you. Global Consumers' Trust in 'Earned' Advertising Grows in Importance CONTACT: Marisa Grimes, marisa.grimes@nielsen.com, 646.654.5759 NEW YORK – April 10, 2012 – Ninety-two percent of consumers around the world say they trust earned media, such as word-of-mouth and recommendations from friends and family, above all other forms of advertising—an increase of 18 percent since 2007, according to a new study from Nielsen, a leading global provider of information and insights into what consumers watch and buy. Online consumer reviews are the second most trusted form of advertising with 70 percent of global consumers surveyed online indicating they trust this platform, an increase of 15 percent in four years. Nielsen’s Global Trust in Advertising Survey of more than 28,000 Internet respondents in 56 countries shows that while nearly half (47%) of consumers around the world say they trust paid television, magazine and newspaper ads, confidence declined by 24 percent, 20 percent and 25 percent respectively since 2009. Trust in Online Ads Trust in Mobile Ads

Interview: Simon Sinek’s Public Speaking Advice I interviewed Simon Sinek on April 24th, 2013 to capture his advice on public speaking. In case you have been living under a rock, Simon is the best-selling author of Start With Why and his TED Talk has been viewed over 12 million times on TED.com and YouTube. After you read this, I encourage you to check out Simon’s 11 free tips and ideas on how to help you speak more effectively so you can inspire action. (For more insight on Simon Sinek’s TED Talk, check out my blog post: How Simon Sinek Delivered His TED Talk) How did you select your topic? To begin with, I never talk about things I do not understand or do not care about. Ask yourself, “Why am I giving this talk?” People often have the reasonably altruistic point of view, “If they learn this, then it will increase their productivity…” However, the best TED talks are grounded in the more deeply personal mindset, “I discovered or did something that dramatically changed my life. My experience was the same. I think out loud.