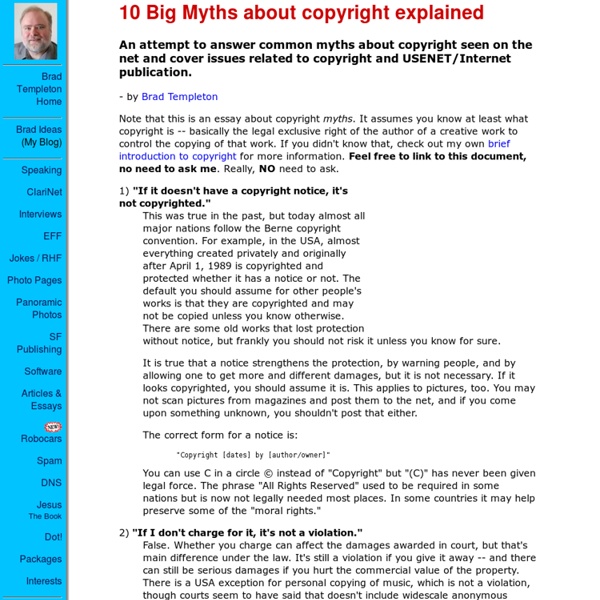 See EFF notes on fair use and links from it for a detailed answer, but bear the following in mind: The "fair use" exemption to (U.S.) copyright law was created to allow things such as commentary, parody, news reporting, research and education about copyrighted works without the permission of the author. That's vital so that copyright law doesn't block your freedom to express your own works -- only the ability to appropriate other people's. Intent, and damage to the commercial value of the work are important considerations. Are you reproducing an article from the New York Times because you needed to in order to criticise the quality of the New York Times, or because you couldn't find time to write your own story, or didn't want your readers to have to register at the New York Times web site? The first is probably fair use, the others probably aren't. Fair use is generally a short excerpt and almost always attributed. See the DMCA alert for recent changes in the law. False. False.

How to Register a Trademark for a Company Name - Small Business Registering a trademark for a company name is pretty straightforward. Many businesses can file an application online in less than 90 minutes, without a lawyer’s help. The simplest way to register is on the U.S. Patent and Trademark Office’s Web site, www.uspto.gov.

The Top 5 Mistakes Inventors make with their Invention There is a maze of information available online for new inventors, much of it very good and much of it highly questionable. Therefore, it is not surprising that each and every week I receive multiple general inquiries from newbie inventors. Although the inquiry can take many different forms, the question inevitably boils down to something like this: “I have recently come up with an idea that I would like to pursue. I have never invented anything in the past, and I have no idea where to start. Help!”

Drug War Clock Researchers examining the effectiveness of ONDCP's anti-drug media campaign reported: "The NSPY [National Survey of Parents and Youth] did not find significant reductions in marijuana use either leading up to or after the Marijuana campaign for youth 12 to 18 years old between 2002 and 2003. Indeed there was evidence for an increase in past month and past year use among the target audience of 14- to 16-year-olds, although it appears that the increase was already in place in the last half of 2002, before the launch of the Marijuana Initiative. It will be worthwhile to track whether the nonsignificant decline from the second half of 2002 through the first half of 2003 is the beginning of a true trend.

Ethics The three major areas of study within ethics are:[1] Meta-ethics, concerning the theoretical meaning and reference of moral propositions, and how their truth values (if any) can be determinedNormative ethics, concerning the practical means of determining a moral course of actionApplied ethics, concerning what a person is obligated (or permitted) to do in a specific situation or a particular domain of action[1] Defining ethics[edit] The word "ethics" in English refers to several things.[6] It can refer to philosophical ethics—a project that attempts to use reason in order to answer various kinds of ethical questions.[citation needed] It can also be used to describe a particular person's own, idiosyncratic principles or habits.[7] For example: "Joe has good ethics."

Trademark The "Registered Trade mark" logo Usage[edit] Gym weights displaying a counterfeit trademark Design Patents: The Under Utilized and Overlooked Patent From U.S. Design Patent No. 765,398, issued September 6, 2016. Once upon a time one of the ways you could spot the scams from the legitimate operators in the patent industry was to look at who was directing clients to get design patents. Design patents have always been easy to obtain, indeed far easier to obtain than a utility patent. Of course, as with many things in life and with virtually everything in the realm of intellectual property law, the easier something is to obtain the less rights that are conveyed. You can obtain a copyright for about $30 if you prepare and file the application yourself, and you get tremendously long protection in terms of the number of years – generations really – but the rights a copyright provides are exceptionally weak.

UVB-76 UVB-76, also known as "the Buzzer", is the nickname given by radio listeners to a shortwave radio station that broadcasts on the frequency 4625 kHz.[1][2] It broadcasts a short, monotonous buzz tone , repeating at a rate of approximately 25 tones per minute, 24 hours per day.[1] Sometimes, the buzzer signal is interrupted and a voice transmission in Russian takes place.[3] The first reports were made of a station on this frequency in 1982.[4] Its origins have been traced to Russia, and although several theories with varying degrees of plausibility exist, its actual purpose has never been officially confirmed and remains a source of speculation.[5] The name[edit]

Ethics in the Classroom: What You Need to Know Ethics and morals are often associated with religion, but schools can also provide important lessons in ethical thinking and action. “There’s a big fear out there that somehow teaching ethics in school will seep into students a particular religious viewpoint,” says Dr. Bruce Weinstein, aka The Ethics Guy. “But ethics must be taught and are being taught in school. It’s impossible not to teach ethics in a school.” Weinstein, who writes a weekly column for BusinessWeek.com and recently released the popular book Is It Still Cheating if I Don’t Get Caught?

Licenses/NC - Definition of Free Cultural Works When the Creative Commons project published its first licenses in December 2002, it finally brought a sense of unity to the free culture movement. Instead of having to choose from many scattered licenses, creators now have the option to pick the right license for their work using a simple tool. They only have to answer basic questions like: "Allow commercial uses? Allow modifications?" The tool then recommends one of the licenses developed by the Creative Commons team.

Plant Patents Can a plant be invented? Yes, according to the U.S. Patent and Trademark Office which issues two types of patents for plants: plant patents and utility patents. Plant Patents In 1930, the United States began granting patents for plants and in 1931, the first plant patent was issued to Henry Bosenberg for his climbing, ever-blooming rose. Hedgehog's dilemma Both Arthur Schopenhauer and Sigmund Freud have used this situation to describe what they feel is the state of individual in relation to others in society. The hedgehog's dilemma suggests that despite goodwill, human intimacy cannot occur without substantial mutual harm, and what results is cautious behavior and weak relationships. With the hedgehog's dilemma, one is recommended to use moderation in affairs with others both because of self-interest, as well as out of consideration for others. The hedgehog's dilemma is used to explain introversion and isolationism. Schopenhauer[edit]

This site is helpful because it clears up misconceptions that a person may have about copyright. by annambaker Feb 5