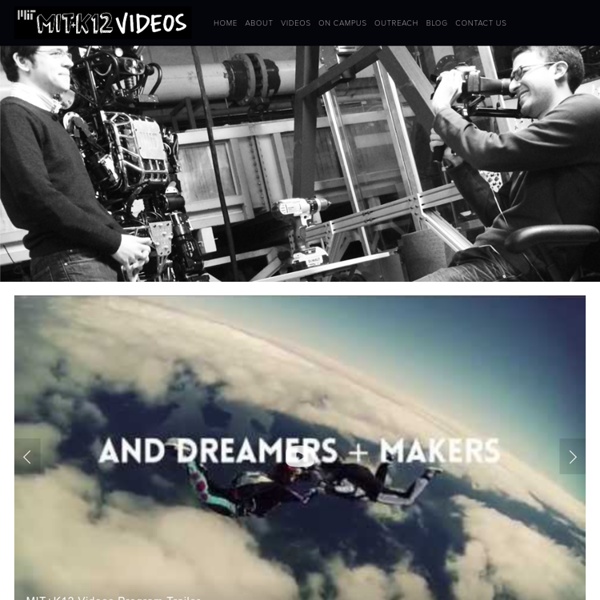 The Field Book Project What is a field book? Field books or field notes are primary source documents that describe the events leading up to and including the collection of specimens or observations during field research. Field notes can take many forms depending on the information needs of the collector. Importance and challenges of field books Field notes are significant sources of information related to scientific discovery.

for Schools Welcome to YouTube! The location filter shows you popular videos from the selected country or region on lists like Most Viewed and in search results.To change your location filter, please use the links in the footer at the bottom of the page. Click "OK" to accept this setting, or click "Cancel" to set your location filter to "Worldwide". Ways to use QR Codes in the Elementary Classroom and Using Google Docs to Create Them “Traditional thinking is all about ‘what is’. Future thinking will also need to be about what ‘can be’” By Edward de Bono Quick Response codes also known as QR codes are similar to barcodes. When you scan QR codes using apps such as i-nigma or scan with your smartphone, ipad and computer (if you have a web camera) it links information to you.

7 Great YouTube Channels for Science Below are some great YouTube channels for science. If you are a science teacher and you need some useful resources where you can search for and find educational science videos, then the list below would be of great help. Some of the channels listed below have thousands of subscribers featuring some of the best science videos online. This is one of the gifted science teachers who shares highly educational videos showing students and learners how to integrate science into day to day life. As its name suggests, this is one of the most reputed YouTube Channels with more than 9 million videos on science and a growing base of thousands of subscribers. I am pretty sure science teachers can find anything they look for in their playlists.

MIT's Alice: Animation, Programming in 3D Alice is an innovative 3D programming environment that makes it easy to create an animation for telling a story, playing an interactive game, or a video to share on the web. Alice is a freely available teaching tool designed to be a student's first exposure to object-oriented programming. It allows students to learn fundamental programming concepts in the context of creating animated movies and simple video games. In Alice, 3-D objects (e.g., people, animals, and vehicles) populate a virtual world and students create a program to animate the objects. In Alice's interactive interface, students drag and drop graphic tiles to create a program, where the instructions correspond to standard statements in a production oriented programming language, such as Java, C++, and C#. Alice allows students to immediately see how their animation programs run, enabling them to easily understand the relationship between the programming statements and the behavior of objects in their animation.

TEDxTeen 2012 "Forget What You Know"Jacob Barnett Watch "Still Figuring It Out"Tavi Gevinson Make Cookie Moons The Moon's phases in Oreos The Moon has "phases." That means it looks a little different to us each night during its one-month orbit of our planet. We describe how the Moon looks with terms such as "Full Moon," "First Quarter," and "New Moon" (which we can't really see, because the side that is lit faces away from us). The Moon has no light of its own. Education Project Noah was created to provide people of all ages with a simple, easy-to-use way to share their experiences with wildlife. By encouraging your students to share their observations and contribute to Project Noah missions, you not only help students to reconnect with nature, you provide them with real opportunities to make a difference. Once you're registered as a teacher, you can create a new place-based mission for your students. Get them excited about nature by experiencing wildlife observation first-hand. Your students will document the world around them and understand the importance of biodiversity. Teacher Account

Mars Exploration Program: Mars for Educators You can participate in four major programs: Curriculum Supplements Robotics activities are available. Download the activity summaries (PDF, 1.33 MB) or the full activity set (PDF, 1.08 MB). Alternatives to YouTube - Richard Byrne Some excellent educational content can be found onYouTube. However, many teachers cannot access YouTube in their classrooms. That is why I originally wrote what became one of the most popular posts to ever appear on Free Technology for Teachers, 30+ Alternatives to YouTube. The list has now grown to 48 resources. Personal Learning Environment Symbaloo EDU PLE | Personal Learning Environment Free Version Premium Version Follow Symbaloo on Social Media! Combine any PD Certification with a Premium Package and SAVE! Our Partners

Dried Out Vegetation Across America Nearly two thirds of the contiguous United States was experiencing some level of drought by the end of August 2012, according to the U.S. Drought Monitor. 39 percent of the nation suffered from severe to extreme drought. Though the numbers changed a bit in mid-September, the drought parched much of the interior United States and left both domestic and wild animals scrounging for food. The browning and withering of vegetation in the United States and northern Mexico is clear in this vegetation anomaly map based on data from the Moderate Resolution Imaging Spectroradiometer (MODIS) on NASA’s Terra and Aqua satellites. The map contrasts plant health in August 2012 (the most recent full month available) against the average conditions between 2002 and 2012.