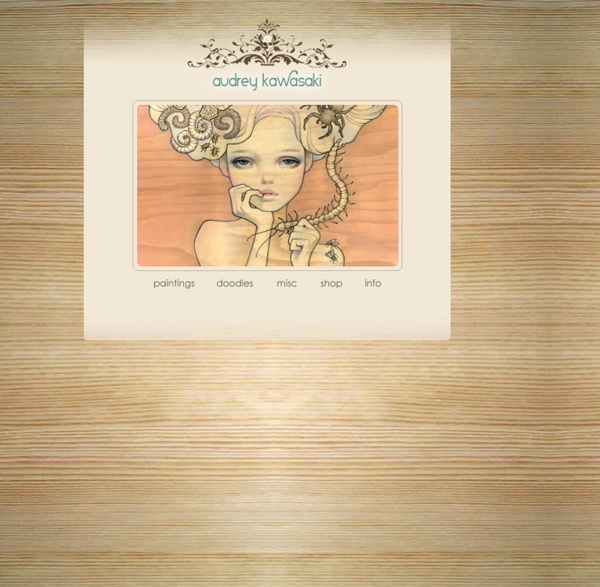 Ethereal Digital Paintings Capture The Look Of Loneliness Loneliness never looked so depressingly good. Variations of glittered deformations form the basis for a grotesquely beautiful motif in the works of Japanese artist 非(xhxix). Digitally sketching, drawing, and painting everything using Photoshop alone, 非 visualizes loneliness in his subjects and decorates them with scars, layers of geometric abstractions and floral imagery. As most of his subjects are young men, the artist explains that “boys are more suitable to express loneliness as women are emotional and powerful.” Concocting images of isolated pain and an ethereal sadness into haunting depictions of young western men, 非 reveals a mystified insight into the depths of the Japanese psyche.

fashion from old people Valentino Fall 2014 Menswear Inaugural dress of Fay Webb Gardner, 1928-29 Fuchsia Dress c. 1923-1925 Nasjonalmuseet for Kunst, Arketketur, og Design (via omgthatdress) Hi, this is Emily, and I know this isn’t a dress, but I thought I would put up a link to this project all the same for folks that might be interested… Everything but the Paper Cut: Eye-popping Ways Artists Use Paper In the year since the Museum of Art and Design reopened in its new digs on Columbus Circle, they've been delivering consistently compelling shows--from punk-rock lace to radical knitting experiments. The newest, "Slash: Paper Under the Knife", opened last weekend and runs through April 4, 2010. The focus is paper--and the way contemporary artists have used paper itself as a medium, whether by cutting, tearing, burning, or shredding.

Marguerite Sauvage A bouquet of personnal works for Exquise Exhibition Paris about feminity in women artists work. These illustrations were also exhibited by Nucleus Gallery, USA.Fashion, Fine Arts, Illustration2012 Everyday Objects Come Alive - Part 3 - My Modern Metropolis - StumbleUpon Cookie Crumbs Terry Border is one of our favorite creative people on the planet. He never ceases to amaze us, as he takes boring, everyday objects and makes them come alive! What's great about his work is that it can be enjoyed by everyone. the art of iain mccaig O dear and patient people... I am sure, by now, that I have set the world record for the longest 'Coming Soon' website in web history. Should you pop on over to www.iainmccaig.com, you will find that it is still almost ready, a phenomenon that must be driving visitors almost as crazy as it is driving me (but not nearly as much as it is tormenting my saintly webmistress). I know this is where I should reveal the amazing secret behind the delay, but honestly, it's just because I keep choosing to do other things, like write a book, or design a movie, or play with my family (but not because of watching the TV--I got rid of that timesucker years ago). So, yes, Virginia, there will be a website. So there--it's not a website, but it's something, and when I hit the post button, it will actually go live, tonight, now.

The Metropolitan Museum of Art, New York - StumbleUpon The exhibition, organized by The Costume Institute, celebrated the late Alexander McQueen’s extraordinary contributions to fashion. From his Central Saint Martins postgraduate collection of 1992 to his final runway presentation, which took place after his death in February 2010, Mr. McQueen challenged and expanded the understanding of fashion beyond utility to a conceptual expression of culture, politics, and identity. His iconic designs constitute the work of an artist whose medium of expression was fashion. The exhibition featured approximately one hundred ensembles and seventy accessories from Mr.

Living in My Head & Illusion & The Most Amazing Creations in Art, Photography, Design, and Video. - StumbleUpon These are pen drawings and paintings by Pat Perry. You can view his photography at Flickr. Artwork and photos © Pat Perry Link via Abduzeedo