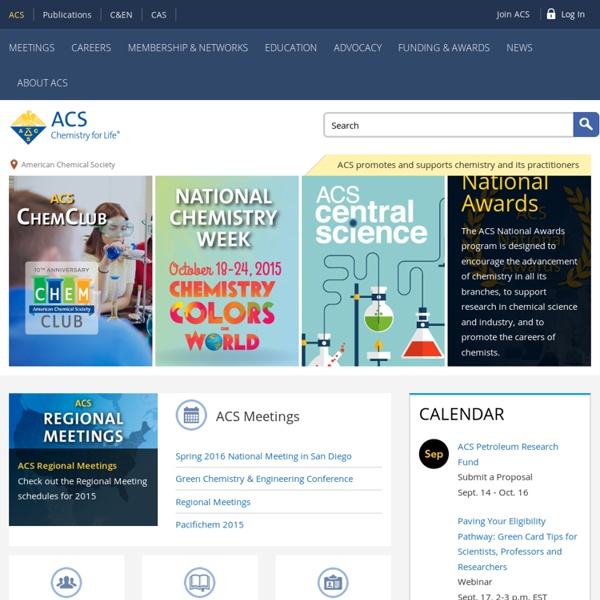 Skip Navigation Links to other American Chemical Society websites: Log In Menu You are here: American Chemical Society Pause ACS 2014 National Election Results ACS 2014 national election results are in! Provide an Essential Foundation Provide an essential foundation for students and teachers to explore the wonders of chemistry. Spring 2015 National Meeting & Expo Registration Discount Join ACS to attend the Spring 2015 national meeting in Denver, Colorado and save up to $335 on your national meeting registration. Member Get A Member Invite a friend or colleague to become an ACS member and receive a periodic table of the elements blanket. Middle School Chemistry Investigate the world of atoms and molecules through free hands-on inquiry-based activities and molecular model animations. previous slide next slide 5 slides in carousel jump to slide 1 jump to slide 2 jump to slide 3 jump to slide 4 jump to slide 5 Announcements: ACS National Elections Results are in! Cool Science Chemistry Quiz What molecule am I?

beyond benign : green chemistry curriculum Green Chemistry: The Green Curriculum "Benign by design," green chemistry is designed to have less impact on the environment by creating lower levels of waste and toxicity than traditional chemistry. Green chemistry is also a compelling way to assist teachers as they strive to interest middle school students (ages 9 – 13) in science and math. Curriculum & Teacher Training

Linus Pauling and The Nature of the Chemical Bond: A Documentary History Revised and Expanded Utilizing over 2,500 manuscript pages, nearly 100 photographs, and more than four hours of audio and video, this website tells the story of a cornerstone achievement of twentieth century science. In 1926 Linus Pauling, then a promising young doctoral candidate, set sail for Europe to study quantum mechanics with an eye toward applying this new physics to problems in structural chemistry. Predicting Bond Type Predicting Bond Type Previous Page: Naming Molecules When two (or, in reality many, many, many) sodium atoms get together they pool their valence electrons. When two (or, in reality exactly two) fluorine atoms approach, they each grab onto one of the other’s valence electrons, without letting go of their valence electron grabbed by the other.

All Nobel Prizes in Chemistry The Nobel Prize in Chemistry 2002 "for the development of methods for identification and structure analyses of biological macromolecules" John B. Fenn and Koichi Tanaka "for their development of soft desorption ionisation methods for mass spectrometric analyses of biological macromolecules" Science Friday Science Friday’s lesson plans and activities are produced by our education staff and with partner organizations. Sep. 26, 2014 Science Club #ObserveEverything By Science Friday Education Go out and observe something interesting! Josiah Willard Gibbs In 1863, Yale awarded Gibbs the first American doctorate in engineering. After a three-year sojourn in Europe, Gibbs spent the rest of his career at Yale, where he was professor of mathematical physics from 1871 until his death. Working in relative isolation, he became the earliest theoretical scientist in the United States to earn an international reputation and was praised by Albert Einstein as "the greatest mind in American history".[1] In 1901 Gibbs received what was then considered the highest honor awarded by the international scientific community, the Copley Medal of the Royal Society of London,[1] "for his contributions to mathematical physics".[2] Commentators and biographers have remarked on the contrast between Gibbs's quiet, solitary life in turn of the century New England and the great international impact of his ideas. Biography[edit]

WWW Chemistry Resources WWW Chemistry Resources Please note that the new Virtual Library: Chemistry site is located at WWW Chemistry Sites Academic Institutions || Non-profit Organizations || Commercial Organizations || Other Lists of Chemistry Resources and Related WWW Virtual Libraries || Special Projects || Publications ||Announcements James Kennedy Anyone who’s spent time in a classroom knows that in any academic subject, the student who reads the textbook several times from cover to cover and makes colourful, organised notes all over it is going to excel in examinations. For this reason, I’ve been trying to get students reading their textbooks (and making great notes on them) almost as long as I’ve been teaching (since 2007). Glancing your eyes over the words in a textbook isn’t enough. How should you use a textbook properly, in any subject? There are six rules you need to follow. 1.