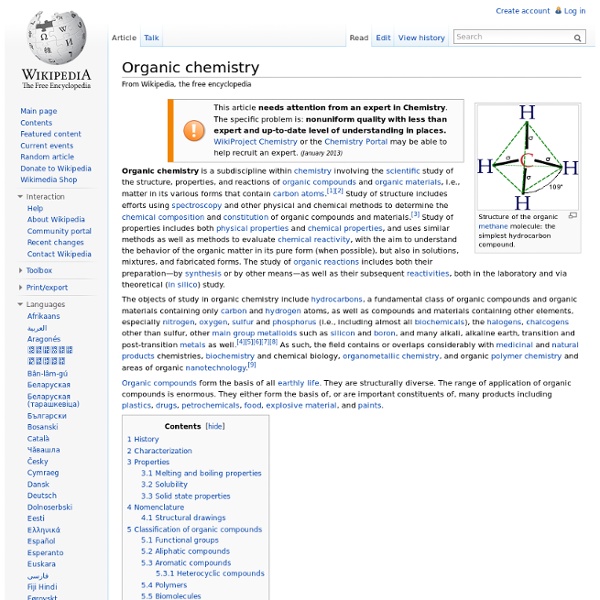 Structure of the organic methane molecule, the simplest hydrocarbon compound Organic chemistry is a chemistry subdiscipline involving the scientific study of the structure, properties, and reactions of organic compounds and organic materials, i.e., matter in its various forms that contain carbon atoms.[1][2] Study of structure includes using spectroscopy and other physical and chemical methods to determine the chemical composition and constitution of organic compounds and materials.[3] Study of properties includes both physical properties and chemical properties, and uses similar methods as well as methods to evaluate chemical reactivity, with the aim to understand the behavior of the organic matter in its pure form (when possible), but also in solutions, mixtures, and fabricated forms. The study of organic reactions includes both their preparation—by synthesis or by other means—as well as their subsequent reactivities, both in the laboratory and via theoretical (in silico) study.

Amanita muscaria Amanita muscaria, commonly known as the fly agaric or fly amanita, is a mushroom and psychoactive basidiomycete fungus, one of many in the genus Amanita. Native throughout the temperate and boreal regions of the Northern Hemisphere, Amanita muscaria has been unintentionally introduced to many countries in the Southern Hemisphere, generally as a symbiont with pine plantations, and is now a true cosmopolitan species. It associates with various deciduous and coniferous trees. Although it is generally considered poisonous, reports of human deaths resulting from eating the mushroom are extremely rare. Taxonomy and naming[edit] The name of the mushroom in many European languages is thought to be derived from its use as an insecticide when sprinkled in milk. Buttons Classification[edit] Amanita muscaria var. formosa sensu Thiers, southern Oregon Coast Amanita muscaria varies considerably in its morphology, and many authorities recognise several subspecies or varieties within the species.

Thiamine Thiamine, also known as thiamin or vitamin B1, is a vitamin found in food, and manufactured as a dietary supplement and medication.[2][3] Food sources include whole grains, legumes, and some meats and fish.[2] Grain processing removes much of the thiamine content, so in many countries cereals and flours are enriched with thiamine.[4][2] Supplements and medications are available to treat and prevent thiamine deficiency and disorders that result from it, including beriberi and Wernicke encephalopathy.[1] Other uses include the treatment of maple syrup urine disease and Leigh syndrome.[1] They are typically taken by mouth, but may also be given by intravenous or intramuscular injection.[1][5] Medical uses[edit] Thiamine deficiency[edit] Other uses[edit] Thiamine is a treatment for some types of maple syrup urine disease and Leigh disease.[1] Adverse effects[edit] Adverse effects are generally few.[1] Allergic reactions including anaphylaxis may occur.[1] Chemistry[edit] Biosynthesis[edit]

Ergoline Ergoline is a chemical compound whose structural skeleton is contained in a diverse range of alkaloids. Ergoline derivatives are used clinically for the purpose of vasoconstriction (5-HT1 receptor agonists—ergotamine) and in the treatment of migraines (used with caffeine) and Parkinson's disease. Some ergoline alkaloids found in ergot fungi are implicated in the condition ergotism, which causes convulsive and gangrenous symptoms. Others include psychedelic drugs (e.g., LSD and some alkaloids in Ipomoea tricolor and related species[citation needed]). Uses[edit] In addition to the naturally occurring ergonovine (used as an oxytocic) and ergotamine (a vasoconstrictor used to control migraine), synthetic derivatives of importance are the oxytocic methergine, the anti-migraine drugs dihydroergotamine and methysergide, hydergine (a mixture of dihydroergotoxine mesylates, INN: ergoline mesylates), and bromocriptine, used for numerous purposes including treatment of Parkinson's disease.

Mescaline Mescaline or 3,4,5-trimethoxyphenethylamine is a naturally occurring psychedelic alkaloid of the phenethylamine class, known for its hallucinogenic effects similar to those of LSD and psilocybin. It shares strong structural similarities with the catecholamine dopamine. It occurs naturally in the peyote cactus (Lophophora williamsii),[1] the San Pedro cactus[2] (Echinopsis pachanoi) and in the Peruvian torch (Echinopsis peruviana), and as well in a number of other members of the Cactaceae plant family. It is also found in small amounts in certain members of the Fabaceae (bean) family, including Acacia berlandieri.[3] Naturally derived mescaline powder extract. History and usage[edit] Peyote has been used for at least 5700 years by Native Americans in Mexico.[4] Europeans noted use of peyote in Native American religious ceremonies upon early contact, notably by the Huichols in Mexico. Potential medical usage[edit] Notable users[edit] Biosynthesis of mescaline[edit] Synthetic Mescaline[edit]

Tabernanthe iboga Tabernanthe iboga or simply iboga is a perennial rainforest shrub and psychedelic, native to western Central Africa. Iboga stimulates the central nervous system when taken in small doses and induces visions in larger doses. In parts of Africa where the plant grows the bark of the root is chewed for various pharmacological or ritualistic purposes. Normally growing to a height of 2 m, T. iboga may eventually grow into a small tree up to 10 m tall, given the right conditions. Traditional use[edit] Bark of Tabernanthe iboga. The Iboga tree is the central pillar of the Bwiti spiritual practice in West-Central Africa, mainly Gabon, Cameroon and the Republic of the Congo, which uses the alkaloid-containing roots of the plant in a number of ceremonies. In lower doses Iboga has a stimulant effect and is used to maintain alertness while hunting.[1][2] Addiction treatment[edit] Legal status[edit] Exportation of iboga from Gabon is illegal since the passage of a 1994 cultural protection law.[5]

Wikileaks Cables Confirm Existence of Extraterrestrial Life We're creating viewer supported news. Become a member! We’re already halfway through 2013 and the world continues to wake up to the fact that we are not alone in the universe. Just this year, we’ve seen a tremendous step forward regarding UFO disclosure. For more CE articles on the subject of UFOs and extraterrestrials, click HERE. Prior to the recent hearing on UFOs and extraterrestrial life, we’ve had explosive statements made by NASA astronauts and professors. It’s now a fact that UFOs are tracked on radar, performing maneuvers that defy our current understanding of physics. “Behind the scenes, high-ranking Air Force officers are soberly concerned about UFOs. — Former CIA Director Roscoe Hillenkoetter, 1960 The UFO/extraterrestrial phenomenon is extremely top secret; access to this type of documentation and the deeper truth behind it is almost impossible. And another: “I have said in passing there is information about UFOs in Cablegate. – Julian Assange We are living in a unique time.

Metabolism The set of life-sustaining chemical transformations within the cells of organisms Simplified view of the cellular metabolism Metabolism (, from Greek: μεταβολή metabolē, "change") is the set of life-sustaining chemical reactions in organisms. The three main purposes of metabolism are: the conversion of food to energy to run cellular processes; the conversion of food/fuel to building blocks for proteins, lipids, nucleic acids, and some carbohydrates; and the elimination of nitrogenous wastes. These enzyme-catalyzed reactions allow organisms to grow and reproduce, maintain their structures, and respond to their environments. Metabolic reactions may be categorized as catabolic - the breaking down of compounds (for example, the breaking down of glucose to pyruvate by cellular respiration); or anabolic - the building up (synthesis) of compounds (such as proteins, carbohydrates, lipids, and nucleic acids). Key biochemicals[edit] Amino acids and proteins[edit] Lipids[edit] Carbohydrates[edit]

Salvia divinorum Salvia divinorum (also known as Diviner's Sage,[2] Ska María Pastora,[3] Seer's Sage,[4] and by its genus name Salvia) is a psychoactive plant which can induce "visions" and other hallucinatory experiences. Its native habitat is in cloud forest in the isolated Sierra Mazateca of Oaxaca, Mexico, where it grows in shady and moist locations.[5][6] The plant grows to over a meter high,[1] has hollow square stems, large leaves, and occasional white flowers with violet calyxes. Botanists have not determined whether Salvia divinorum is a cultigen or a hybrid; native plants reproduce vegetatively, rarely producing viable seed.[7][8] Mazatec shamans have a long and continuous tradition of religious use of Salvia divinorum, using it to facilitate visionary states of consciousness during spiritual healing sessions.[1] Most of the plant's local common names allude to the Mazatec belief that the plant is an incarnation of the Virgin Mary, with its ritual use also invoking that relationship. History

Taxonomy Specific taxonomies include: Natural sciences[edit] Computing[edit] Flynn's taxonomy, a classification of instruction level parallelism methodsFolksonomy, classification based on user's tagsTaxonomy for search engines as a tool to improve relevance of search in a vertical domain Business and economics[edit] Education and academia[edit] Bloom's taxonomy, a standardized categorization of learning objectives in an educational contextClassification of Instructional Programs, a taxonomy of academic disciplines at institutions of higher education in the United StatesMathematics Subject Classification, an alphanumerical classification scheme based on the coverage of Mathematical Reviews and Zentralblatt MATHSOLO taxonomy, Structure of Observed Learning Outcome, proposed by Biggs and Collis Tax Safety[edit] Other taxonomies[edit] See also[edit]

Salvinorin A Salvinorin A is the main active psychotropic molecule in Salvia divinorum, a Mexican plant which has a long history of use as an entheogen by indigenous Mazatec shamans. Salvinorin A is considered a dissociative exhibiting atypically psychedelic effects. Salvinorin A can produce psychoactive experiences in humans with a typical duration of action being several minutes to an hour or so, depending on the method of ingestion.[2] History[edit] Salvinorin A was first described and named in 1982 by Alfredo Ortega and colleagues in Mexico. They used a combination of spectroscopy and x-ray crystallography to determine the chemical structure of the compound, which was shown to have a bicyclic diterpene structure.[3] Around the same time, Leander Julián Valdés III independently isolated the molecule as part of his PhD research, published in 1983.[4] Valdés named the chemical divinorum, and also isolated an analog that he named divinorum B. Pharmacology[edit] Potency and selectivity[edit] Salvinorin A

Ibogaine Ibogaine is a naturally occurring psychoactive substance found in plants in the Apocynaceae family such as Tabernanthe iboga, Voacanga africana and Tabernaemontana undulata. A psychedelic with dissociative properties, the substance is banned in some countries; in other countries it is used by proponents of psychedelic therapy to treat addiction to methadone, heroin, alcohol, cocaine, methamphetamine, anabolic steroids, and other drugs. Ibogaine is also used to treat depression and post traumatic stress disorder. Derivatives of ibogaine that lack the substance's psychedelic properties are under development.[1] Ibogaine-containing preparations are used for medicinal and ritual purposes within African spiritual traditions of the Bwiti, who claim to have learned it from the Pygmy peoples. Ibogaine is an indole alkaloid that is obtained either by extraction from the iboga plant or by semi-synthesis from the precursor compound voacangine,[3][4] another plant alkaloid. History[edit]