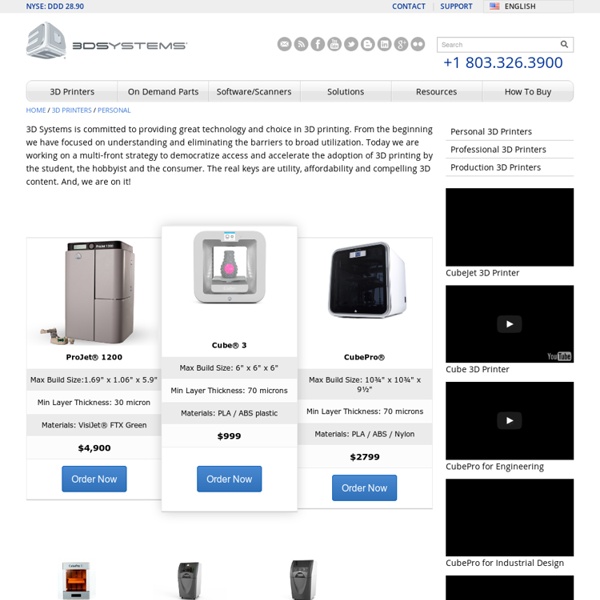 Ultimaker: There’s a New 3D Printer in Town The new Ultimaker 3D printer made in the Netherlands has arrived in the US. The machine, which prints bigger and faster than MakerBot printers, was created by three Dutch makers who met at the Fab Lab in Utrecht, Holland two years ago. The Lab is one of dozens of digital fabrication centers around the world affiliated with MIT’s Center for Bits and Atoms. Fab Lab/Utrecht’s manager, Siert Wijnia, collaborated with web designer Martijn Elserman and grad student Erik De Bruijn on the speedy new machine. “We wanted to have a better 3D printer, not necessarily to start a business,” says De Bruijn, who had built several open source RepRap 3D printers before tackling the project. “If Fab Lab wasn’t there, this whole thing wouldn’t have happened,” insists Elserman.

Why Porter's Model No Longer Works - Nilofer Merchant Imagine that you wanted a new home theater system. But instead of spending hours in Best Buy or on Amazon comparing configurations and assembling the parts you needed, you could signal what you wanted and a company would create it for you. You might simply Pinterest the elements you liked, including information about your space or noise limitations (“One-bedroom apartment on busy street in New York,” or “suburban space that needs stuff protected from little kids”), and then have a retailer give you a personalized, optimal configuration. Right now, social is largely seen as a way to amplify messages (“Like” us on Facebook!) or to create conversations around customer service (“We’re so sorry you’re having a problem,” the persistent tweet from @ComcastCares). These two key functions — Marketing and Service — are regularly discussed as shaped by social era dynamics.

3D Printers & 3D Production Systems The Stratasys Idea Series levels the playing field by bringing professional 3D printers to individuals and small teams, accelerating creativity. Making the leap to world-class 3D printing at such a low cost is a revolution on its own. If you’ve ever taken a 3D prototype for a test spin before production, you already know its impact. Cut turnaround time and increase quality by building prototypes right under your own roof with Stratasys Design Series 3D printers.

Big data: The next frontier for innovation, competition, and productivity The amount of data in our world has been exploding, and analyzing large data sets—so-called big data—will become a key basis of competition, underpinning new waves of productivity growth, innovation, and consumer surplus, according to research by MGI and McKinsey's Business Technology Office. Leaders in every sector will have to grapple with the implications of big data, not just a few data-oriented managers. The increasing volume and detail of information captured by enterprises, the rise of multimedia, social media, and the Internet of Things will fuel exponential growth in data for the foreseeable future. MGI studied big data in five domains—healthcare in the United States, the public sector in Europe, retail in the United States, and manufacturing and personal-location data globally. Big data can generate value in each.

BFB Announces 3DTouch 3D Printer - Fabbaloo Blog - Fabbaloo Just as the TCT conference commences, Bits From Bytes has suddenly announced a new 3D printer for their catalog: the 3DTouch 3D Printer. Details are scarce, and we're seeking more, but for now this printer seems to supersede the very popular BFB 3000 series. In fact, the 3DTouch appears visually very similar to the BFB 3000, with the major difference being the control box now seems to be inside, rather than dangling from the front of the unit.

Big Data's Management Revolution - Erik Brynjolfsson and Andrew McAfee by Erik Brynjolfsson and Andrew McAfee | 10:05 AM September 11, 2012 Big data has the potential to revolutionize management. Simply put, because of big data, managers can measure, and hence know, radically more about their businesses, and directly translate that knowledge into improved decision making and performance. The iModela IM-01 "3D Printer" - Fabbaloo Blog - Fabbaloo We've been reading a ton of posts from various online services talking about Japan-based Roland's new "iModela 3D Printer". This fully assembled device is able to produce 3D objects upon command and retails for under USD$1000. The iModela IM-01 comes with software to design your objects, a travel case and there's even an online community to discuss your iModela activities. But we noticed something. It's not a 3D printer. It's an inexpensive simplified 3D CNC Mill.

CourseSmart announces analytics program to measure student engagement It has never been too hard to spot the student in class who didn’t do the assigned reading -- she’s usually the one in the back, not raising her hand, and avoiding eye contact in hopes of not being called on. But a new program could make identifying unprepared students even easier, and, the creators hope, improve outcomes and retention. CourseSmart, the digital textbook provider that is partnered with five major publishers, announced the launch of CourseSmart Analytics on Wednesday. The program, which is currently being piloted at three colleges, tracks students’ engagement with their e-textbooks and provides and allows professors and colleges to evaluate the usefulness of learning materials and to track student work. The program looks at metrics of student usage, including page views, time spent in a textbook, notes taken, highlights made, bookmarks used, and whether or not the student even opened the book.

Technische Universität Wien : The World’s Smallest 3D Printer 3D-printer at TU Vienna Markus Hatzenbichler and Klaus Stadlmann with their micro-printer Printers which can produce three-dimensional objects have been available for years. However, at the Vienna University of Technology, a printing device has now been developed, which is much smaller, lighter and cheaper than ordinary 3D-printers. 33 Awesome Augmented Reality Apps & Games for Android Augmented Reality (AR) is going to be the future of most apps, all it takes is a decent processor, a camera, a compass and a GPS — all of which are becoming increasingly common on smart phones. This futuristic AR world for android is is slowly growing. Though, the true experience of Augmented Reality Technology is yet to be seen, some apps and games which are available for Android can give you a glimpse of it. I’m featuring 33 36 of them here: (I’ve added QR Codes as well so its easy for you to download them.