Your Online Hub for Game/AI 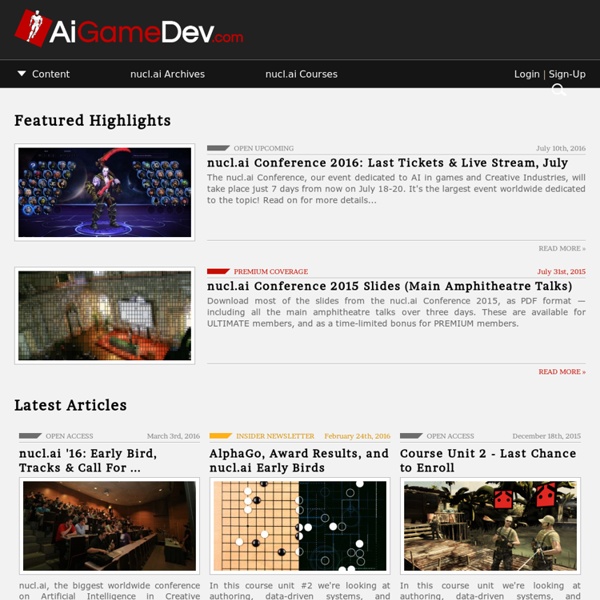 Open Editorial January 3rd, 2014 Games of the Year: The 2013 AiGameDev.com Awards ... In our 2013 Awards for Game AI, find out the winning games in categories from technology to design and of course the overall winner. The games this year have raised the bar in many places for artificial intelligence, including autonomous buddy behavior, search-based techniques to find optimal moves, and non-character AI such as music ... Open Tutorial July 16th, 2013 Lazy Theta*: Faster Any-Angle Path Planning

Top 10 eCommerce Gamification Examples that will Revolutionize Shopping Shopping has evolved so much from traditional market exchanges. It completely transformed from acquiring of needed goods into a rich experience that integrates deeply into every single culture of civilizations that can afford to power such an activity. People shop for fun, and for many (ahem, me not included), shopping could still be an epic win after spending 3 hours in a mall without buying a single item.

OZMod for Java OZMod for Java Copyright (C) 2013 by Igor Kravtchenko What is OZMod? OZMod is a Java sound library designed to replay MOD tracker musics (MOD, S3M, XM, IT) and sounds (WAV, AIFF and AU). Inventors' handbook Disclosure and confidentiality Know the important difference between protecting your idea against disclosure and protecting your idea against infringement. Proving the invention Prototypes are necessary. Plan and control your prototyping activities so that you can prove your invention. Building a team and seeking funding Mozilla Rewards Digital Literacy With New Webmaker Badges Over the weekend, Mozilla launched Mozilla Webmaker Badges to “recognize the skills that you learn” while making “awesome webmaking projects” (and for participating in the Mozilla Webmaker community and events). Here are the badges you can earn: “As users complete projects on Webmaker.org – like creating web pages, animated GIFs, or learning the fundamentals of programming — they can earn digital badges linked to their identity,” Mozilla explains. “This provides a lasting record of their skills and achievements, and shows off their new skills to teachers, classmates, peers or future colleges and employers, backed by Mozilla.”

Planting the Seeds of AI in Open-Source RTS 0 A.D. 0 A.D. is an open-source RTS inspired by the Age of Empires series. From the AI perspective, it also features most of the challenges in commercial games too, such as economy management, strategy and tactics, etc. This interview with Jonathan Waller digs into his work on the AI for the game. You'll find out how the AI picks spots for buildings, and how pathfinding is used to select building sites for defensive buildings — among other things. Famous Biographies & TV Shows - Biography.com Singer, Music Producer, Songwriter (1961–) Roland Orzabal is an English musician, songwriter and record producer best known as co-founder with Curt Smith of the popular '80s pop band Tears for Fears. Talk Show Host, Football Player, Athlete (1971–) Michael Strahan is a former defensive end for the New York Giants, and co-host of the morning television program Live! With Kelly and Michael.

Customer Relationship & Loyalty Platform Oracle is currently reviewing the existing CrowdTwist product roadmap and will be providing guidance to customers in accordance with Oracle’s standard product communication policies. Any resulting features and timing of release of such features as determined by Oracle’s review of CrowdTwist’s product roadmap are at the sole discretion of Oracle. All product roadmap information, whether communicated by CrowdTwist or by Oracle, does not represent a commitment to deliver any material, code, or functionality, and should not be relied upon in making purchasing decisions. It is intended for information purposes only, and may not be incorporated into any contract. Cautionary Statement Regarding Forward-Looking Statements This document contains certain forward-looking statements about Oracle and CrowdTwist, including statements that involve risks and uncertainties concerning Oracle’s proposed acquisition of CrowdTwist, anticipated customer benefits and general business outlook.

Badgeville launches Dynamic Game Engine and Widget Studio In an era where rewarding customer involvement has exploded to a whole new level through social media, companies are starving to get their hands on solutions that they can leverage to take advantage of social gaming and it's popularity. Back in December I wrote about Moxsie.com's use of Badgeville as their weapon of choice for building customer incentive through a Facebook badge program in an effort to involve their fans in the buying process. Badgeville won the Audience Choice Award when it launched at the Tech Crunch Disrupt last September and the demand for their social reward system has gone nowhere but up. Industry leading brands like Island Def Jam (Universal Music), The Active Network, Bluefly.com and more have signed on with Badgeville to harness the viral power of gamification to help reach user-driven objectives, turning it into profit. Dynamic Game Engine and Widget Studio

SmarterEveryDay Twitter SmarterEveryDay Loading... Down The Rabbit Hole We Go! 300+ Mind Expanding Documentaries I watch a lot of documentaries. I think they are incredible tools for learning and increasing our awareness of important issues. The power of an interesting documentary is that it can open our minds to new possibilities and deepen our understanding of the world.