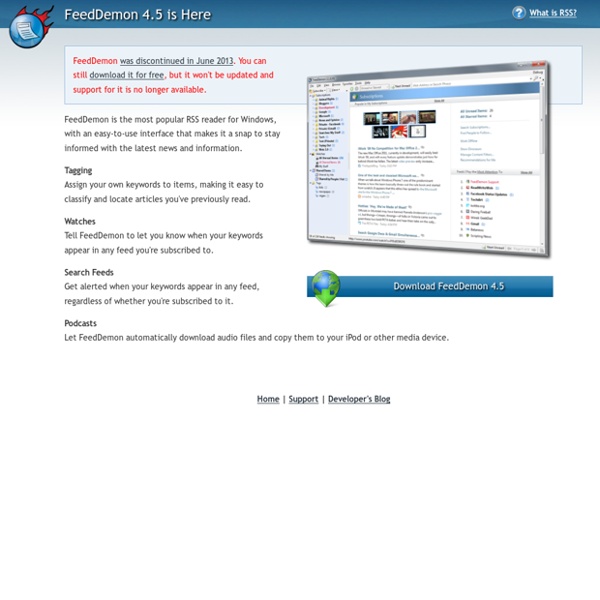 Check Out These Google Reader Alternatives With the news that Google is killing off Google Reader as of July 1, 2013, users everywhere are on the lookout for potential replacements. Replacing Google Reader isn't easy; the service isn't just an RSS reader — it's also the de facto cloud-based RSS syncing service. Many Google Reader users don't even use the web app as their primary feed reader, instead using the service to offer subscription, read, unread and folder information to other RSS clients such as Reeder, NetNewsWire and FeedDemon.

Nick Bradbury Since announcing the end of FeedDemon last week, I've been overwhelmed by the number of people who say they're sad to see it go. Many of these people have told me they want to keep using it. So here's what I'm going to do: sometime before the demise of Google Reader, I'll release a new version of FeedDemon which no longer syncs with Google Reader. This version will be free, won't contain any ads, and will have all of the features of the Pro version. You can use it free of charge for as long as you like - but it will be the last version of FeedDemon. Fever° Red hot. Well read. While It’s Hot Fever reads your feeds and picks out the most frequently talked about links from a customizable time period. Unlike traditional aggregators, Fever works better the more feeds you follow. No Pressure By default Fever hides unread counts to spare you unsavory unread item guilt but sometimes you want to keep an eye on those climbing numbers. Control unread counts on a global, group or feed level. Stay Hydrated Fever integrates with the popular Mac OS X single-site browser factory Fluid.app.

Welcome to FeedSquares Thank you for installing FeedSquares for Chrome! You can take a look at our full tutorial here. Or just click on our little icon and start right away - FeedSquares is super easy to use! The Old Reader What does it do? The Old Reader allows you to subscribe to your favorite sites so you can stay in the know. Connect with friends to share and discuss articles you love. Send links to your favorite social networks, or save them to Pocket, Instapaper or Readability. What does this service cost? The Old Reader is free for up to 100 feeds.

FQChromeUpdates Many users should already know that Google Reader will not be available after 1 July 2013. Due to this change, FeedSquares will no longer be available after 1 July 2013 as well. Please consider to use our Chrome Web App NewsSquares. Why RSS still matters Google's bombshell last night that it would be shutting down the Google Reader RSS client hit the web, well, like a bomb. Just as with any major tech event, it spurred a raft of reactions on what is currently our best real-time conversation broadcasting network, Twitter. Reactions ranged from outrage to sadness to smugness — the latter epitomized by the camp who say that RSS was already a confusing mess that needed to be shot down completely and besides, it had been replaced by Twitter itself anyway.

How To Export Starred Items From Google Reader Into HTML posted by Alan Rimm-Kaufman | September 19, 2008 | 19 comments I’m a big fan of Google Reader. I like to use the gold star to flag interesting posts. Yahoo Should Seize the Moment and Improve Its RSS Reader RSS readers may be the iPod of the web — still viable but past their heyday. For Google, though, the analogy breaks down when you consider profits. Apple still makes a bundle on iPods, but Google never made a dime on its Reader and never will. That explains Google's decision this week to kill off Reader. Google has lots of other profitable areas to focus on, so it's confident enough to ignore the pleas of users who are hooked on the search giant's news feed.

20 Alternatives to Google Reader So the really big news yesterday, outstripping that of a new Pope is the news that Google is Powering Down Google Reader, which for many people is a total disaster. Google's hypocrisy is taken to entirely new heights in their post on the matter; they say "We know Reader has a devoted following who will be very sad to see it go. We’re sad too." No, what they really mean is 'we don't care'. Even more (33) Google Reader alternatives The other day I gave you 20 alternatives to Google Reader. Now I'm giving you a whole bunch more that I've found. I haven't tried the vast majority of them, so can't vouch for them, but I'll be sure to tell you what I think! (Note: since I'm going to probably be referring to 'Google Reader' quite a lot, I'm shortening it to GR for the sake of my sanity and fingers) Android Rivers is, as the name suggests, designed for Android devices. BackStitch was one that I liked the look of; very smooth.

RSS isn't dead: the best Google Reader alternatives 75inShare Jump To Close When I heard Google was planning to kill Google Reader on July 1st as part of a “spring cleaning exercise,” I was appalled. Google had decided to disband the team of paperboys that delivered me the news every morning. Best Tool To Make Web Reading Fun And Consume More Information We all use Internet for grab new knowledge. Search for verity of topics and find interesting stuffs that we really wish to read. How can I actually get through all this stuff?[...] It seems like never get through everything we want to read in a day , i am talking 1000 unread items. Just bookmarking webpage on browser seems to be a bad idea, Which will lead to loading up in my toolbar that never get read!

RSS Feed Search Engine Instant RSS Search engine will help you discover RSS feeds on the web around your favorite topics. You may use the tool to search RSS feeds for blogs, news websites, podcasts and more. It is instant search and hence the search results display as you type. You may use any of the Google search operators - like allintitle, inurl, etc. - for more accurate results. You can subscribe to the feeds in your favorite RSS Reader (like Feedly) or use the Preview link to see the 10 most recently published articles from that feed.