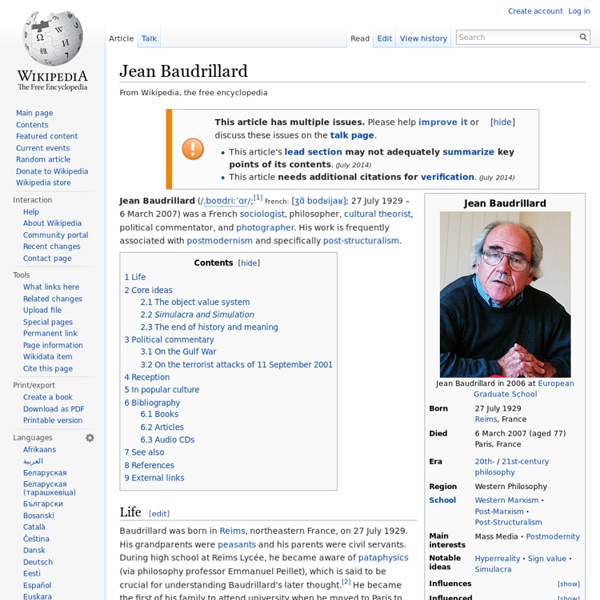 Jean Baudrillard (/ˌboʊdriːˈɑr/;[1] French: [ʒɑ̃ bodʁijaʁ]; 27 July 1929 – 6 March 2007) was a French sociologist, philosopher, cultural theorist, political commentator, and photographer. His work is frequently associated with postmodernism and specifically post-structuralism. Life[edit] Baudrillard was born in Reims, northeastern France, on 27 July 1929. His grandparents were peasants and his parents were civil servants. While teaching German, Baudrillard began to transfer to sociology, eventually completing his doctoral thesis Le Système des objets (The System of Objects) under the dissertation committee of Henri Lefebvre, Roland Barthes, and Pierre Bourdieu. In 1970, Baudrillard made the first of his many trips to the United States (Aspen, Colorado), and in 1973, the first of several trips to Kyoto, Japan. In 1986 he moved to IRIS (Institut de Recherche et d'Information Socio-Économique) at the Université de Paris-IX Dauphine, where he spent the latter part of his teaching career. Related:  Here, Take Your Pick • dontmakemechoose

B.B. King, Blues Legend, Dead at 89 | Rolling Stone B.B. King, the larger-than-life guitarist and singer who helped popularize electric blues and brought it to audiences for more than six decades, died Thursday in Las Vegas. He was 89. King, who was diagnosed with diabetes nearly 30 years ago, was hospitalized last month due to dehydration. Last October, he was forced to cancel eight tour dates for dehydration and exhaustion. His attorney, Brent Bryson, confirmed his death to the Associated Press. Into his late eighties, King toured the world year-round as the unrivaled ambassador of the blues. "He is without a doubt the most important artist the blues has ever produced," Eric Clapton wrote in his 2008 biography, "and the most humble and genuine man you would ever wish to meet. King didn't do anything small; his excesses included food, women, (he claimed to have fathered 15 children by 15 different partners) and gambling (he moved to Las Vegas in 1975). He was born Riley B. Said King, "Blues purists never cared for me. In 1991, B.B.

Cody Wilson Cody Rutledge Wilson (born January 31, 1988) is an American crypto-anarchist,[1][2] free-market anarchist, and gun-rights activist,[3] best known as a founder/director of Defense Distributed, a non-profit organization that develops and publishes open source gun designs, so-called "wiki weapons", suitable for 3D printing and digital manufacture.[4][5] He is a co-founder of the Dark Wallet bitcoin storage technology.[6] Early life and education[edit] Originally from Little Rock, Arkansas, Wilson was student body president at Cabot High School in Cabot, Arkansas; he graduated in 2006. Wilson graduated from the University of Central Arkansas (UCA) with a bachelor's degree in English in 2010, where he had a scholarship.[15] While at UCA, Wilson was a member of Sigma Phi Epsilon fraternity and was elected president of UCA's Student Government Association. He also traveled to China with UCA's study-abroad program.[16] He is a former student[17] of the University of Texas School of Law.[12][18]

rollingstone Part I Muhammad Ali Bites the Bullet, Leon Spinks Croaks a Legend ... Sting Like a Butterfly, Float Like a Bee ... Wild Notes of a Weird Cornerman When I'm gone, boxing will be nothing again. Life had been good to Pat Patterson for so long that he'd almost forgotten what it was like to be anything but a free-riding, first-class passenger on a flight near the top of the world.... It is a long, long way from the frostbitten midnight streets around Chicago's Clark and Division to the deep-rug hallways of the Park Lane Hotel on Central Park South in Manhattan.... That is Muhammad Ali's world, an orbit so high, a circuit so fast and strong and with rarefied air so thin that only "The Champ," "The Greatest," and a few close friends have unlimited breathing rights. Pat Patterson, by contrast, was a virtual newcomer to The Family. Yes. The Spinks Disaster in Vegas had been a terrible shock to The Family. I knew it was too close for comfort. The decision was anticlimactic. That was 14 years ago.

Summary of Hegel's Philosophy of Mind Up to the English Server! Paul Trejo, August 1993 For over 180 years students have complained that Hegel's best-known book of philosophy, the PHENOMENOLOGY OF MIND (alias PHENOMENOLOGY OF SPIRIT), is too difficult to read. A few have tried to summarize Hegel's book, and often their summaries were longer than the original, and just as difficult to read.

“Liberals still don’t take Reagan seriously enough”: New biographer says Reagan was postwar America’s FDR For American political junkies — especially those who never liked him in the first place — it’s hard to imagine a figure in living memory whose persona and worldview has been more thoroughly combed-over, scrutinized and disseminated than that of the country’s 40th president, Ronald Wilson Reagan. The Republican Party rank-and-file, of course, can’t get enough of him. Nary a day goes by during the 2016 campaign (which is happening more than 10 years after Reagan’s death, incidentally) without one or more high-ranking GOP candidates promising to be Ronaldus Magnus for the 21st century. But Democrats often have Reagan on the mind, too — especially the current president. In ways big and small, we seem to still be living in the house Reagan built. Yet while most of us are familiar with “Ronald Reagan,” the icon and lightning rod, fewer of us quite understand Ronald Reagan, the man. Since Reagan, new government programs have come rarely and with great difficulty. What about foreign policy?

Kant's Transcendental Arguments (Stanford Encyclopedia of Philosophy) 1. The Transcendental Deduction The Transcendental Deduction (A84–130, B116–169) is Kant’s attempt to demonstrate against empiricist psychological theory that certain a priori concepts correctly apply to objects featured in our experience. Dieter Henrich (1989) points out that Kant’s use of ‘Deduktion’ redeploys German legal vocabulary; in Holy Roman Empire Law, ‘Deduktion’ signifies an argument intended to yield a historical justification for the legitimacy of a property claim. In Kant’s derivative epistemological sense, a deduction is an argument that aims to justify the use of a concept, one that demonstrates that the concept correctly applies to objects. For Kant a concept is a priori just in case its source is the understanding of the subject and not sensory experience (A80/B106; Strawson 1966: 86). Hume’s position on the deducibility of a priori metaphysical concepts is Kant’s quarry in the Transcendental Deduction. 1.1 Apperception and its Unity 2. Note 3. 3. and 4. One of P. 5.

Alan Lomax: American Ethnomusicologist Alan Lomax an ethnomusicologist, much like Bela Bartok, was responsible for the recording and preserving of American folk music in the 20th century, much of which has ceased to exist in a living form. Without the foresight and diligent cataloging performed by Lomax and his colleagues, the Americana not practiced in modernity would have been lost to history. Alan Lomax was born to a pioneering folklorist, John Lomax, and employed by the Library of Congress from 1937-42 collecting folk music. An FBI report dated July 23, 1943, describes Lomax as possessing “an erratic, artistic temperament” and a “bohemian attitude.” If you are interested in understanding more about Appalachian culture, which is essentially a British tradition stemming from before the industrial revolution that was preserved and evolved in the highlands of the New World, check out Alan Lomax’s 1991 documentary “Appalachian Journey.”

Antonin Scalia is unfit to serve: A justice who rejects science and the law for religion is of unsound mind Readers of this column already know that faith-derangement syndrome has stricken the highest levels of the executive branch of government, afflicting President Obama and virtually all his potential successors. Now we have evidence that it has spread to the top organ of the judiciary, the Supreme Court. But first, a clarification. Secondary symptoms exhibited by sufferers of FDS comprise feelings of righteousness and sensations of displeasure, even outrage, when collocutors question, reject or refute the espousal of said absurdities. Back to FDS and the Supreme Court. At least one “challenge” (anthropogenic global warming) is indeed unprecedented, and scientifically demonstrated, and, considering the threat it poses to humanity, not something to ho-hum about. We have even more damning evidence of Justice Scalia’s FDS-related impairment, and it came to my attention thanks to the website of the New Civil Rights Movement. Senior interviewed Scalia for her magazine. “Oh, of course I do. No.

Practicing The Subtle Art Of Detachment – Personal Growth – Medium From everything that I recall about my life so far, I can say one thing with absolute certainty. I have been an extremely passionate person. Passionate about everything. Be it life in general, work, friendships, relationships. I take the leap and I go all in like there is no middle spot. And that always seemed to work for me. Until, I reached a day when the things that really mattered to me were at a point of collapse and I collapsed along with them. And my story is not really unique in this sense. Mental fatigue and burnout is almost like the epidemic of the century. And that’s because there is a bit of a downside of being too passionate. And why is that? Because with attachment comes a very strong urge to control the circumstances. While you can exercise some amount of control over what happens in your life, that will absolutely never eliminate the possibility of things going haywire or the possibility of your plans and ambitions not quite turning into reality. I don’t think so. 2. 3. 4. 5.