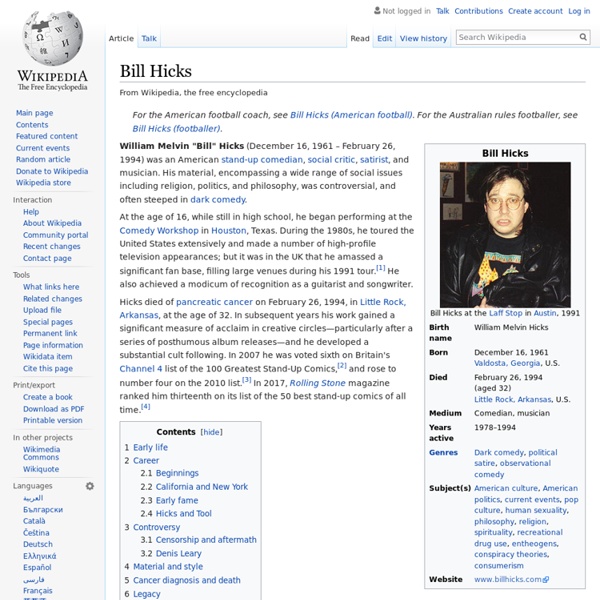 William Melvin "Bill" Hicks (December 16, 1961 – February 26, 1994) was an American stand-up comedian, social critic, satirist, and musician. His material, encompassing a wide range of social issues including religion, politics, and philosophy, was controversial, and often steeped in dark comedy. At the age of 16, while still in high school, he began performing at the Comedy Workshop in Houston, Texas. Hicks died of pancreatic cancer on February 26, 1994, in Little Rock, Arkansas, at the age of 32. Early life[edit] Hicks was born in Valdosta, Georgia, the son of James Melvin "Jim" Hicks (1923–2006) and Mary Reese Hicks, the younger sibling of Lynn and Steve. Early on, Hicks began to mock his family's Southern Baptist religious beliefs. The elder Hicks would say, "I believe that the Bible is the literal word of God." Hicks did not, however, reject spiritual ideology itself, and throughout his life he sought various alternative methods of experiencing it. Career[edit] Beginnings[edit]

.Ysengrimus .Naomi Klein: Corporate Branding Excerpted from No Logo (10th Anniversary Edition) by Naomi Klein, reprinted by The Guardian. In May 2009, Absolut Vodka launched a limited edition line called "Absolut No ­Label." The company's global public relations manager, Kristina Hagbard, explained that "For the first time we dare to face the world completely naked. We launch a bottle with no label and no logo, to manifest the idea that no matter what's on the outside, it's the inside that really matters." A few months later, Starbucks opened its first unbranded coffee shop in Seattle, called 15th Avenue E Coffee and Tea. This "stealth Starbucks" (as the anomalous outlet immediately became known) was decorated with "one-of-a-kind" fixtures and customers were invited to bring in their own music for the stereo system as well as their own pet social causes -- all to help develop what the company called "a community personality." Clearly the techniques of branding have both thrived and adapted since I published No Logo.

Mumbo-Jumbo Conquered the World How Mumbo-Jumbo Conquered the World, by Francis Wheen (Harper Perennial, £7.99) It has been fashionable in higher intellectual circles - the self-proclaimed higher intellectual circles, that is - to declare the end of the Enlightenment project. To rely on reason, we are told by tenured professors at institutes of further education, is tantamount to anything between relying on a horse and buggy to get around town and endorsing the Nazis' scientific approach in the concentration camps. It might not matter too much - it may be a scandalous trahison des clercs, but who cares what the clercs say anyway? Quite a few influential people care; that's the problem. Certainly, rationality is beleaguered these days. That our leaders for the past 25 years or so have been as cretinous as anyone else who believes there are fairies at the bottom of their garden is not exactly consoling.