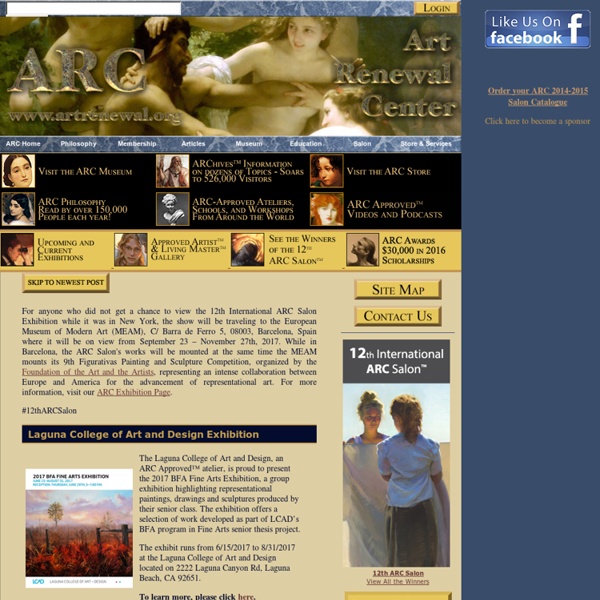 Why Realism? You will want to read this major new addition to the ARC Philosophy which proves the decisive importance and value of traditional Realism. In “Why Realism”, Mr. Ross supplies the expanding Realist movement with the strongest rationale yet, why Realist images are the only way possible to achieve the primary reason that fine art exists…. which is to communicate with poetic beauty the ideas and passions of our shared humanity. ARC for many years has focused the debate about Realism vs. Modernism whose definition is characterized by celebrating the destruction of realism.

tortillion.htm How To Make A Tortillion A tortillion is nothing more than a piece of rolled paper used as a blending tool. The softness or hardness of the tortillion is controlled by the type of paper you choose to make it out of. I have never liked to use a finger or a blending stump on a drawing because it always looks like a big smudge when you are finished. GhibliWiki latest news Latest news from GhibliWiki. Have news? Let us know! March-ing Through the News Thanks to Tram Nguyen and Daniel Zelter for the news. --LLin (talk) 20:16, 12 March 2014 (CDT) How to Use Almost Any 35mm Film Camera (with pictures) Once your camera is set up, you can go out into the big blue room and take some great photographs. Older cameras, however, will require that you set many (sometimes all) of the things that a modern film or digital camera would handle for you automatically. 1Focus your shot. We'll detail this first because some old SLR cameras need their apertures stopped down in order to meter; this makes the viewfinder much darker, and makes it harder to see when you're in focus or not.

Coilhouse “Alternative subcultures. They were a crucial aspect of industrial civilization in the two previous centuries. They were where industrial civilization went to dream. Lackadaisy Expressions Boy, I didn't know what I was getting myself into when I started this. I've had requests for some sort of expressions tutorial dating back a while now, so I figured, "Sure! I can explain expression drawing...and it'll be way better than all those tutorials out there that are nothing but charts of generic expressions. Brittney Lee A few months ago, artists at the studio were given canvases and asked to create a piece of artwork based on any one of the 50 Disney animated features that inspires us. Once finished, these canvases will be sold at a charity auction later this year. I will pass along the details as soon as I have them, but for now I thought I would post a few photos of my finished piece:) My inspirational film of choice is (of course) The Little Mermaid. I knew that I wanted to work with paper for this piece, but I also wanted to utilize the large (18"x36") canvas that was given to me. After a little experimentation, I decided to cut the canvas to be the top foreground elements while its wooden frame serves as a perfect support for the inner layers of paper.

Bioshock 2's In-Game Posters Recreated In Photoshop Remember Geekologie Reader Stefan Petit's gallery of posters from the original Bioshock he recreated in Photoshop? Well he just finished doing Bioshock 2's as well. Aaaaaand these are them. Man, I wish I could've seen Rapture in its heyday, that would've been the tits. 50 Incredible Photography Techniques and Tutorials Advertisement Over the recent months we’ve been presenting various showcases of photography – while many readers hated the showcases, most readers found them inspirational and perfect for a lousy workday’s morning. However, what we should have done in the inspirational posts is not just provide you with some inspiration for your work, but also present useful photographic techniques which can help you to achieve optimal pictures for your designs. And as requested by many of you, now it’s time to correct our mistake.

The Flop Box A bad beginning makes a bad ending 4/14/2014 Peter Saul curated group show @ Zürcher Studio Austin Lee Taylor McKimens Karl Wirsum Judith Hudson Irena Jurek Disney's "Tangled" Character Design Development. Once "Rapunzel", then "Rapunzel Unbraided", and now "Tangled", Disney's 50th animated Feature film, set for release November 28th, has gone through many changes throughout it's years in development. One thing that hasn't changed much, though, is the artistic influence of two artists in particular. One was the French Rococo painter Jean-Honorer Fragonard, specifically one of his best known works; “The Swing” which inspired the lush fairy tale world that Rapunzel inhabits. The second is animation legend Glen Keane, who was the original driving force behind the film.