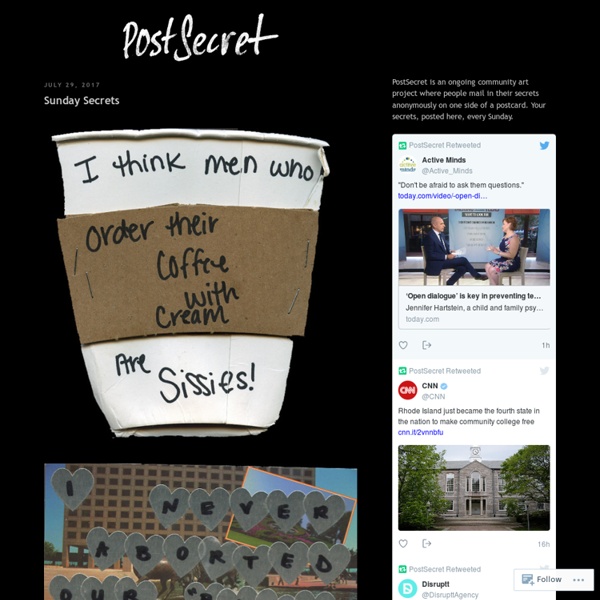 —–Email—– People do care… and you’re not the only one who has had that thought. I owe my life to my Duke friends and my therapist at Duke’s counseling center… —–Email—– I live in the next town over (Chapel Hill), and I care very much about how much you’re hurting. Please reach out to those around you to stay safe. You can find out about suicide intervention resources in our community here: http://www.trianglesuicideprevention.org/resources.htm . Be well.

Outsider art - Wikipedia Anna Zemánková, No title, 1960s Outsider art is art by self-taught or naïve art makers. Typically, those labeled as outsider artists have little or no contact with the mainstream art world or art institutions. In many cases, their work is discovered only after their deaths. Often, outsider art illustrates extreme mental states, unconventional ideas, or elaborate fantasy worlds.

Voleur de secrets Okay, this rat is leaving the ship. I’m not going to delete it, but I’m not going to use this blog anymore for a while. Maybe later. Study Finds 1 in 3 Americans Have Been Implanted With RFID Chips: Most Unaware Tiny RFID chips can be implanted anywhere in the body, including during dental work. Scientists at the Wyoming Institute of Technology (WIT) have determined that a shocking 1 in 3 Americans has been implanted with an RFID microchip. In an article published this week, they detail a study of nearly 3000 individuals, in which they identified nearly 1000 individuals that had been implanted with an RFID chip. Most were unaware that they had been implanted with such a chip. This finding comes amongst increasing predictions that RFID chip implantation will become common place in the next decade. Lead scientist on the study, John Brugle, Ph.D. offered the following:

Back to the future Article by James Pond I am the owner of Pondly.com / art lover / electrical engineer / software developer / MBA in e-business student. I blog for pleasure and love to share my Internet findings. Web site: Irina Werning, a Buenos Aires Photographer asked friends and family to “re-enact” old photos of themselves for an ongoing project, which she christened “Back to the Future.” Did you like these photos?

15 Outstanding Tools to Collect, Organize and Share Your Web Experience If you’re a blogger, journalist, or simply have a desire for more knowledge, you’ve most definitely faced information organization problems. Sometimes being able to access and find information quickly is crucial. Nowadays the web is enormous and it’s a big advantage to have a place where you can store all your bookmarks, pictures and links, access them anytime, anywhere and be able share them quickly. New Scenes of Fantasy and Disaster on Traditional Blue Porcelain Dinner Plates by Calamityware Look once you see your grandmother’s china, look twice and you see… Big Foot? Don Moyer, the graphic designer behind Calamityware (previously here and here), has designed several more white porcelain plates playfully poking the traditional blue Willow pattern design. On his plates, intricate patterns found on the outer edge trick the eye until one notices mysterious occurrences happening near the center. Pirate ships take over Victorian villages, swamp monsters grab for traditional Japanese pagodas, and erupting volcanoes threaten to overtake peaceful towns. Two of Moyer’s newest plate designs, a group of savage zombie poodles and a soaring pterodactyl, are currently on Kickstarter.

Patrizia Soffiati - Google+ - Cos'è una storia? +You Search Images Maps Play YouTube The 7 Laws Of Attraction By following these 7 essential life principles and making conscious choices with your thoughts, words, and actions...you are certain to attract the same right back to you. Did you know there were 7 Laws Of Attraction? Well, it was a surprise to me. Though after I sought more information about the 7 Laws of Attraction, I found that they really are just individual elements broken down into subsets of the main Law.

im not catholic :) Im just amazed at some of the things people wish to tell the world!. by dinksdesigns Jan 9

I'm a catholic and I would never tell the priest half the bad things I have done.... by natashalexandra Jan 6

it isn't concept art it's a form of human behaviour and psyhology really because without that we wouldn't have secrets. But I guess we all have our own opinions which is really what science is a mixture of opinions and facts. by ashleybailey Aug 8