Beautiful/Decay Cult of the Creative Arts 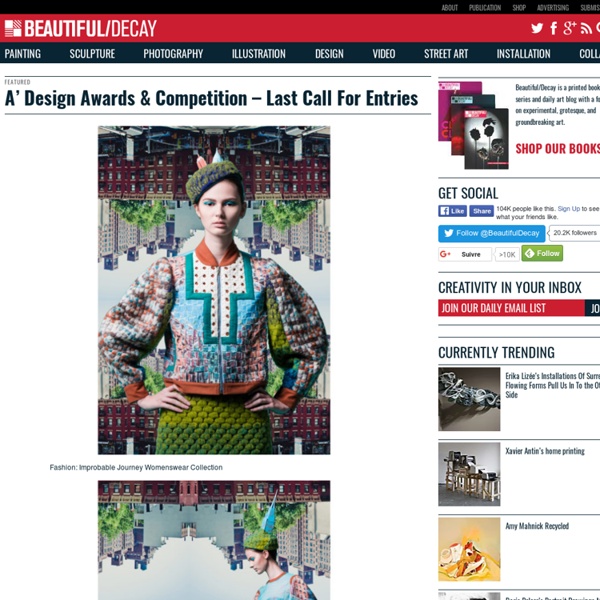 Art By a Typewriter British artist Keira Rathbone uses typewriters, instead of brushes and pencils, to create amazing portraits and drawings. Found on: Odditycentral.com Submitted by Joshua Riehl The Flop Box A bad beginning makes a bad ending 4/14/2014 Peter Saul curated group show @ Zürcher Studio Austin Lee Taylor McKimens Best of 2013: Perfume and Otherwise 2013 was eventful for me - a little more eventful than I tend to like - and it had less to do with perfume than I'd prefer. Still, there were highlights. Precious few, but they peppered the disappointments enough to keep me engaged, if barely. - In November, Andy Tauer and I released the third fragrance in our ongoing collaboration between the characters and stories of the Woman's Picture film series and the line of companion fragrances we created, Tableau de Parfums. It was a summation for us of what we've done the last several years, and an anniversary in many ways - celebrating a creative partnership, a cycle of stories, and a love of perfume and film in general.

Design Observer John Foster has been a longtime collector of self-taught art and vernacular photography, as well as an artist, designer, and art curator. His collection of anonymous, found snapshots has toured the country for over five years and has been reviewed and featured in Harper’s Magazine, Newsweek Online, Phaidon, SF Gate, The Village Voice and many others. In 2005, Art & Antiques magazine named John one of the “Top 100 Collectors” in the United States. John currently serves on the Board of Trustees for SPACES, an organization dedicated to saving and preserving arts and cultural environments; and is an Advisory Board Member of the Folk Art Society of America. For eleven years, he taught graphic design and fine arts at John Burroughs School in St. Louis; he was a member of the corporate design group at Fleishman-Hillard International Communications and later Associate Principal at Buck Consultants, a national firm focused on HR and the design of employee communications.

Two-Shots: Leanne Shapton's Sunday Night Movie Paintings In 2011, Leanne Shapton, the illustrator and writer, published a series of watercolors called “A Month of…,” which was posted online in monthly installments grouped by theme. The eighth and final collection, “Sunday Night Movies,” included thirty-one illustrated scenes from films that Shapton had watched on Sunday nights. A year later, the Canadian publisher Drawn and Quarterly asked Shapton to expand that theme into a longer book of paintings. Here, Shapton presents a selection from her forthcoming book, and explains some themes in the series that became apparent to her only after she was finished.

3D Paintings on Panes of Glass by David Spriggs and Xia Xiaowan Using multiple layers of clear glass, Canada based David Spriggs and Chinese born Xia Xiaowan, transform flat artwork into 3D sculptures. Viewers are treated to different shifting perspectives of the works based on where they stand in the art space. Spriggs work revolves around powerful explosive imagery, often resembling storms, cosmic blasts or firework like explosions. Xiawan’s “spatial paintings,” which often feature distorted figures, are drawn individually using colored pencil on tinted glass. Only when these pieces are combined on their floor racks do the images create the whole hologram like effect. See Also INCREDIBLE 3D ILLUSTRATIONS JUMP OUT OF THE SKETCHBOOK Stunning Collection of Abstract Art Paintings Top Home » Illustration • Inspiration » Stunning Collection of Abstract Art Paintings Abstract art is an interesting form of art that makes use of visual language of form, color and line. These elements create an interesting work of art that stays alive with a scale of independence from visual references in the world. We have collected some dazzling examples of abstract art and paintings by the world famous artists. We hope that this collection will inspire you.

Adorably Awkward Cards by Emily McDowell I have a confession. I have been obsessed with Emily McDowell's illustrations ever since I laid eyes on them. This woman has the most hilarious sense of humor I have found on the Internet in a very long, long time. The illustrator, designer and self-professed "truth-teller" only really busted out into the art scene in January 2013, when she created a funny Valentine's Day card (seen above), put it on Etsy and then had it go viral after Etsy featured it on their Facebook page. In May 2013, she launched her own line of 45 cards at the National Stationary Show, and, according to the illustrator, "every day since has been an adventure.

Presentation, Presentation, Presentation This week's column by Ctein After my earlier column, "We Need Our Audiences," Kathy Li (a.k.a. inkista) and I continued to discuss online venues and audiences. When I wrote that column, I got things a little wrong. I said that Kathy didn't have a website or online gallery for presenting her work, and that was technically correct.