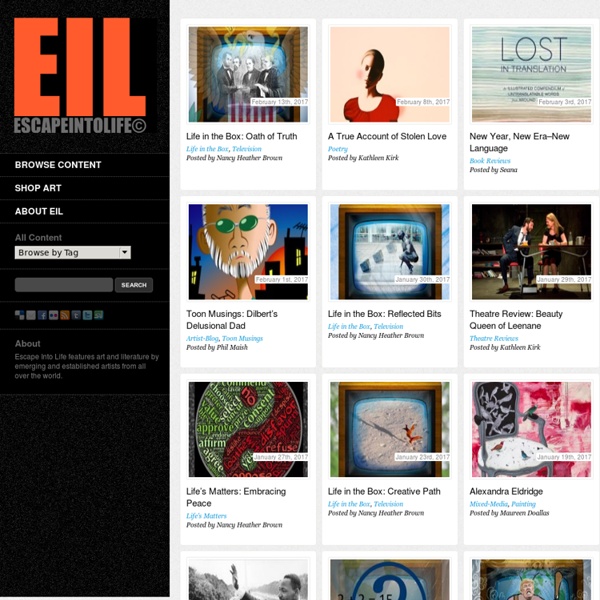 Antony Gormley Early life[edit] The youngest of seven children born to a German mother and an Irish father,[1] Gormley grew up in a wealthy Roman Catholic[2] family living in Dewsbury Moor, West Yorkshire.[1] He attended Ampleforth College, a Benedictine boarding school in Yorkshire,[1] before reading archaeology, anthropology and the history of art at Trinity College, Cambridge, from 1968 to 1971.[1] He travelled to India and Sri Lanka to learn more about Buddhism between 1971 and 1974.[1] After attending Saint Martin's School of Art and Goldsmiths in London from 1974, he completed his studies with a postgraduate course in sculpture at the Slade School of Fine Art, University College, London, between 1977 and 1979. Career[edit] Gormley's career began with a solo exhibition at the Whitechapel Art Gallery in 1981.

Hi-Fructose Magazine In his portrait series, the Austrian artist Aldo Tolino deconstructs, folds, reassembles and weaves printed photographs in order to create origami-like sculptural pieces. Tolino then re-photographs the works, converting the pieces back into two-dimensional objects. The disturbing quality of the images may not just be due to the fact that the folded faces appear distorted, disproportional and almost entirely stripped of identity. In their conversion back to a photographic object, these pieces also suggest a cycle of infinite reprocessing and deformation, wherein the portrait will only continue to move further away from the original “true” image. This perhaps serves to remind us of the precarious nature of photography itself; the lack of control we have over photographic images, the instability of their meaning and function, which can be both liberating and unsettling. Aakash Nihalani approaches space almost like a cartoonist.

Chris Nicholls Photography : Roaring 20’s* Bio Born in England and raised in Canada, Chris Nicholls has emerged as one of the most sought after fashion photographers, splitting his time between New York and Toronto. He lives with his wife Lorca and his three children. 3D Paintings on Panes of Glass Using multiple layers of clear glass, Canada based David Spriggs and Chinese born Xia Xiaowan, transform flat artwork into 3D sculptures. Viewers are treated to different shifting perspectives of the works based on where they stand in the art space. Spriggs work revolves around powerful explosive imagery, often resembling storms, cosmic blasts or firework like explosions. Xiawan’s “spatial paintings,” which often feature distorted figures, are drawn individually using colored pencil on tinted glass.

Improve your photography with clasical art. Adjusting your photographs to get the color 'just right' can be a chore. Think about this: The Old Masters of painting spent years of their lives learning about color. Why let all their effort go to waste on the walls of some museum when it could be used to give you a hand with color correction? When Photoshop entered the CS series it included a new tool called 'Match Color.' Quipsologies • Quipsologies, is a division of UnderConsideration, chronicling the most curious, creative, and notable projects, stories, and events of the graphic design industry on a daily basis. • Quipsologies uses TypeKit to render P22 Underground, Skolar Web by TypeTogether, and Coquette by Mark Simonson. • Quipsologies is run with Six Apart’s MovableType 6.3.2 • Syndicate / RSS Feed

Animated stereoviews of old Japan 28 Oct 2009 In the late 19th and early 20th century, enigmatic photographer T. Enami (1859-1929) captured a number of 3D stereoviews depicting life in Meiji-period Japan. [Sumo wrestlers] A stereoview consists of a pair of nearly identical images that appear three-dimensional when viewed through a stereoscope, because each eye sees a slightly different image. Most Controversial Paintings in Art History Most Controversial Paintings in Art History Posted by Susan Benford An art history blog post from Famous Paintings Reviewed.