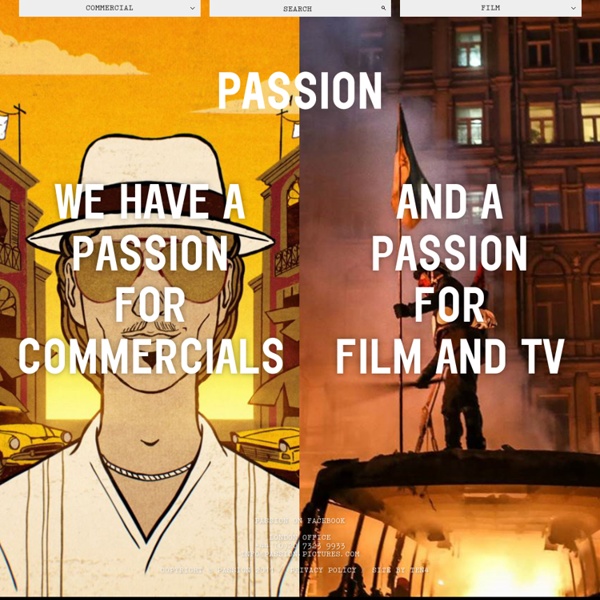 Tattoo Aftercare Posted on December 4, 2013 by lenny . Episode 6 of AOL On’s new original series My Ink features NASCAR Pit Crew queen and Cross-Fit expert Christmas Abbott. Christmas utilizes her past to fuel her fire on the track and in the gym. FOREAL™ - FLIKFLAK SUNNY HOURS 16 We created the new campaign, consisting of three main visuals, an animation and the print products for the actual Flik Flak summer campaign in direct cooperation with Swatch. Our job was to develop three unique and playful compositions to support the newly introduced watches in online and offline media.

santos cerdos ! Funeral is a story about a trio of slackers who like to watch car accidents.At this moment this is my most personal work. This short film is my graduation project from digital animation. It was first presented on February 2014 at the Universidad Veritas. GiantMilkCan WE ARE a Hamburg based CG and VFX studioWE SPECIALISE IN 3D animations and simulationsWE DO commercial, broadcast, film, game, art, experimental content GiantMilkCan UG (haftungsbeschr.) Neuer Pferdemarkt 13 20359 Hamburg F: +49 (0)40 36166504 web@giantmilkcan.com HR 108285 Hamburg USt-Id-Nr.

Videos Straight-away I was reminded of Jake Fried, but only in materials/process. It’s clear that Emanuele is also intuitively fleshing out the movement frame-by-frame as he goes but his work is unique in that there’s no figurative elements to recognize; only abstract geometry and form that, when quilted together, comes across as both familiar and foreign. I’m reminded of the notebooks I used to fill with random scribbles while bored out of my mind in high school: I’d start with a stray line or a random shape and then try to make sense of it with the remaining paper, as if the choatic mess left by my pen was what I had intended to create from the beginning. It was a way to pass the time and entertain myself instead of blankly staring at the clock, fantasizing about the bell that would eventually set me free. Thanks for passing this one along, Sam Lillard! P.S.

Persuade. Change. Influence. Contact Representation East Coast Hunky Dory Gisela Limberg 212 235 7080 Swiss Volkswagen - Alien ATG - Top 7 LO Favør - Kollektiv hjem - din innboforsikring Com Hem - the Crystal Clear experience Maike Plenzke Illustration Personal Work Fashion Editorial HYPERCASTLE The Silent Tower and The Silicon Mage are the first two books in Barbara Hambly’s portal fantasy series The Windrose Chronicles. For those unfamiliar with the term, a portal fantasy involves travel between two realms: our familiar Earth at some point in history and somewhere else, either Faerie, Heaven, Hell, a dreamscape, or another planet entirely. In this series, the two realms are Los Angeles in the 80s and the Empire of Ferryth on another world. In the first two books, it’s never explicitly stated whether the Empire’s planet is another Earth existing in a parallel dimension or a different planet orbiting a different sun altogether; however, both worlds contain human beings that are sufficiently similar for the same magic spells to work on both. What we are told is that our Earth, the Empire’s planet, and stranger worlds filled with utterly alien beings are all connected by the Void.