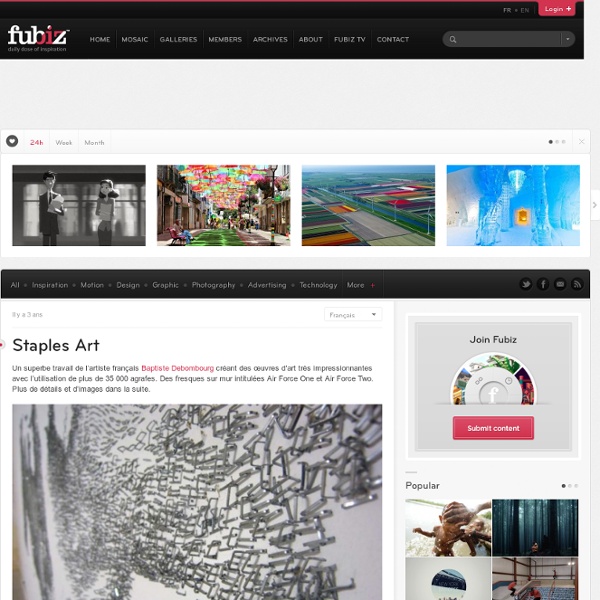 Photography's Longest Exposure - household name : : : blog [click +] Six months. That's right. This dream-like picture shows each phase of the sun over Bristol's Clifton Suspension Bridge taken during half a year. Portraits of Strangers When I’m out on the streets, I often encounter faces that make me look twice; faces that stand out in the crowd without trying; faces that are out of the ordinary. They range from the exquisitely beautiful to the strangely wonderful. I started to approach these strangers for permission to take a photo of them. Some said no, but most said yes. After taking their portrait, I’d say ‘thank you’ and walk on along.

Paper Cutting Art by Hina Aoyama: Inspiration by Karen Horton on design:related February10 Details close Added : February 10, 2009 Carved Book Landscapes by Guy Laramee (click images for detail) For the better part of three decades multidisciplinary artist Guy Laramee has worked as a stage writer, director, composer, a fabricator of musical instruments, a singer, sculptor, painter and writer. Among his sculptural works are two incredible series of carved book landscapes and structures entitled Biblios and The Great Wall, where the dense pages of old books are excavated to reveal serene mountains, plateaus, and ancient structures. Of these works he says: So I carve landscapes out of books and I paint Romantic landscapes.

World's Smallest Aquarium With Fish Siberian craftsman Anatoly Konenko is responsible for the smallest aquarium in the world. A glass cube measuring 30 x 24 x 14 mm, filled with multicolor stones and sand, contains 10 ml of water for a tiny fish. It also have a little water purification filter to keep the water healthy for fish. Only baby fish can fit inside the tiny glass cube that is the world’s smallest aquarium. Anatoly Konenko has been fiddling around with micro-miniatures for 30 years – he was the first such craftsman in Siberia. He worked out how to write on rice grains, poppy seeds even human hair, and created the necessary micro-instruments to do this. Where Science, Art and Photography Intersect (25 photos) Silhouette with Matches Caleb Charland demonstrates lessons in physics and mathematics with his mind-blowing photography. Inspired by children's books of science experiments, he photographs everyday objects (like matches, pens and mirrors) in ways we've never imagined, often using multiple exposures to tell the story. For example, in Fifteen Hours, the last photo in this set, Charland used 15 exposures to show how the flame of a dinner candle beautifully burns down.

A Father Who Creatively Captures His Kids (20 photos) If there was a prize that could be given out to the most creative father, I'd hope that it was awarded to Jason Lee. A wedding photographer by day, he's used to capturing some of the most important moments in a couple's lives. As a longtime fan of Jason's photos on Flickr however, I think the real magic happens when he turns the camera onto his daughters. Sure, his children are adorably cute in their own right, but that's not what makes his photos so interesting. It's when he puts his own spin on their everyday moments that we not only get to experience our own childhood again, we're able to see a father's pride shine through.