Panem Brings to Life Marx’s Manifesto. By: Caroline B. 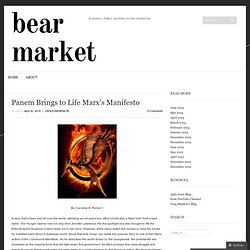 Period 1. The Hunger Games: Mockingjay's bombed-out dystopia is all too familiar. I took two 13-year-olds to one of the bleakest films I have ever seen. 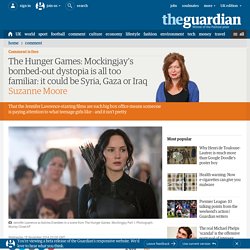 In it, hospitals full of children were bombed, there were public executions, prisoners paraded in hoods, and there was torture. This was not some kind of punishment: the 13-year-olds were excited beyond belief. When I told my youngest that I had preview tickets for Mockingjay Part 1, the latest in the Hunger Games series, she emailed: “Oh my I am not prepared I am dying just start planning the funeral I love u.” Yes, this is how teenage girls talk, and yes, they know it’s kind of funny.

Reds, nukes, waste ... how space films reveal our earthly fears. It was the film that turned science fiction from B-movie fodder into an entertainment that combined glittering spectacle with intellectual intrigue. 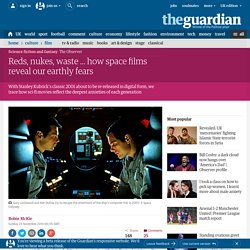 Now 2001: A Space Odyssey is to be re-released around Britain in a new digital format as the mainstay of a national sci-fi film festival, Days of Fear and Wonder. “Stanley Kubrick’s 2001 was a game-changer,” said the British Film Institute’s Rhidian Davis, producer of the festival. “It gave class and style to science fiction in the cinema, and that makes it the perfect film to act as the cornerstone of our festival when it is re-released nationally on Friday.” Set up by the BFI, Days of Fear and Wonder will feature in cinemas around the country until the end of December and include dozens of classics, such as Alien, Blade Runner, Solaris and Silent Running. Sites for screenings have included the British Museum and the giant radio telescope at Jodrell Bank. Capitalism, Communism, and the Hunger Games. [This article is a tad complex. 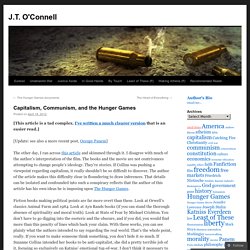 I’ve written a much clearer version that is an easier read.] [Update: see also a more recent post, Occupy Panem] The other day, I ran across this article and skimmed through it. I disagree with much of the author’s interpretation of the film. The books and the movie are not contrivances attempting to change people’s ideology. Fiction books making political points are far more overt than these. The Political Message of The Hunger Games. This article contains spoilers for The Hunger Games. 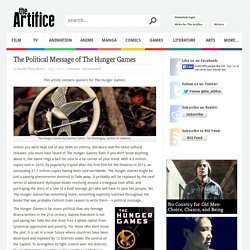 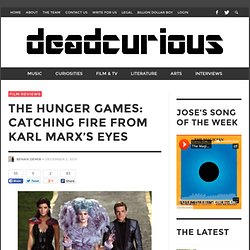 “Divergent” and “Hunger Games” as capitalist agitprop. “Divergent” follows in the footsteps of “The Hunger Games” in a number of obvious ways: It’s an expensive action movie with a female hero and a romantic subplot, set in a dystopian future society and based on a series of popular young-adult novels. 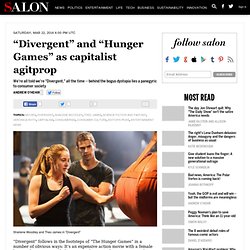 Its star, 22-year-old Shailene Woodley, has been groomed and selected over the past couple of years to stand alongside “Hunger Games” lead Jennifer Lawrence in a new Hollywood firmament of youth, an important consideration for a business that now sees itself dangerously tethered to a cluster of middle-aged stars. That’s the context for the analysis I’m expected to provide: a mixture of industry-savvy “let’s not forget this is a business,” some reified male-gaze mooning about Woodley’s limpid hazel eyes and lustrous brown hair, and some pretense of suspending disbelief when it comes to this recycled Teens vs.

The Man adventure yarn. Interstellar review "escapism" Interstellar and the Value of the Cinematic Experience. Paramount Pictures The experience matters. 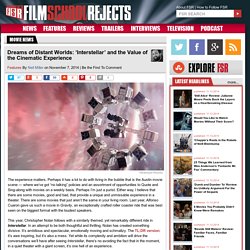 Perhaps it has a lot to do with living in the bubble that is the Austin movie scene — where we’ve got “no talking” policies and an assortment of opportunities to Quote and Sing-along with movies on a weekly basis. Perhaps I’m just a purist. Either way, I believe that there are some movies, good and bad, that provide a unique and unmissable experience in a theater. There are some movies that just aren’t the same in your living room. This year, Christopher Nolan follows with a similarly themed, yet remarkably different ride in Interstellar. At its surprisingly swift 169 minute runtime, Interstellar isn’t just one thing. The 11 Most Important Political Science Fiction Movies.

From fantasy to reality: how science fiction has influenced technology. Instead of cruising in on a hoverboard, I rode my bike to the office today. 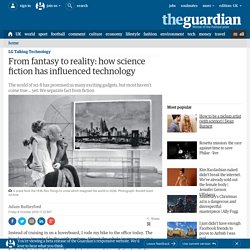 The bicycle was invented in the 19th century. Almost the whole journey was on a form of tarmac, invented at the end of that same century. Instead of taking a pill for breakfast, I had a bacon roll, cooked using gas. Science fiction has lied to us. Making predictions is tricky, especially about the future, as physicist Niels Bohr quipped. Teleportation, however, is now possible. More generally, automation is what science fiction frequently delivers, but its arrival in the real world has been unpredictable. Fiction doesn't always get it wrong. Statement from Virgin Galactic. To our friends and family all around the world, Today marks one week since the tragic accident on SpaceShipTwo’s fourth rocket-powered test flight. 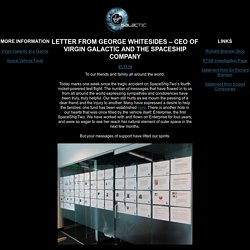 The number of messages that have flowed in to us from all around the world expressing sympathies and condolences have been truly, truly helpful. Our team still hurts as we mourn the passing of a dear friend and the injury to another. Many have expressed a desire to help the families; one fund has been established here. There is another hole in our hearts that was once filled by the vehicle itself: Enterprise, the first SpaceShipTwo. But your messages of support have lifted our spirits. Not only have you comforted us in a time of loss, you have told us to take courage, and to continue pressing forward with resolve.

And we want to share with you our story, as we move forward. The Global Panorama. Jay Cray, Correspondent (Film) After a long week, we all love popping a film on and putting our feet up on a Friday night. With the recent release of The Hunger Games: Catching Fire (2013) and the upcoming release of The Hobbit: The Desolation of Smaug (2013), it’s easy for us to escape into the story line and fantasy of a great film for two hours, when we need it. So why is film (and television, for that matter) a great medium for escapism? Well, there are a number of reasons. More and more novel adaptations are being used, most famously J.K. Another reason can be linked to cinematic technological advancement. Theory and ideology - Fantasy Films - children, movie, tv, cinema, scene, story.

Karl Marx – Alienation and Commodity Fetishism in Social Media. Spring 2011 R&C – Political Economy When one thinks of the political economy of Marx, social media is probably not high on the scale of relevancy. Indeed, what likely comes to mind is a sepia-toned depiction of laborers slaving away their lives under a ruthless capitalist in a gritty turn of the century factory. While this image is indeed how Marx would likely have you conceptualize some of his ideas, I would like to humbly suggest that a more modern picture of Marxian political economy could be drawn; and in a very unlikely place. Social Media; the Siren’s Call? The past decade has seen incredible increases in the use of social media.

Such rapid growth and adoption of new online services is not surprising in this media-driven and connected age. Figure 1 - (Nielsen, 2010) Compounding this social media craze is the parallel craze for smartphones; application driven and web-enabled mobile phone devices. Free Markets on Film: Hollywood and Capitalism. Movie Genres That Make The Most Money. Effects of Reality TV on Society.