Record number of women elected in Victorian local council elections - ABC News. Read a version of this story in Chinese: 阅读中文版本 Surgical nurse Ashleigh Vandenberg has made history in more ways than one by becoming the first Indigenous person elected to her local Melton Council. 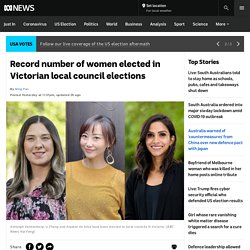 Key points: Some 272 women were elected to local council, making up a record 43.8 per centElection ambitions for some were thwarted by domestic duties during the pandemic At least six Indigenous and 28 LGBTQI+ people elected in recent elections The proud Wiradjuri woman is one of at least six Aboriginal or Torres Strait Islander people to gain seats in the recent Victorian local council elections. She's also one of 272 women to be elected, bringing women's representation in local government up to a record 43.8 per cent — the highest in Australia. 'Eye-watering' coronavirus debt is 'manageable' but unemployment levels remain troubling - ABC News. LinkedIn. Power Words - 189 Words That Convert. What Happens to Our Brains When We Have Stage Fright: The Science of Public Speaking - This is a guestpost by Mikael Cho, the co-founder of ooomf. 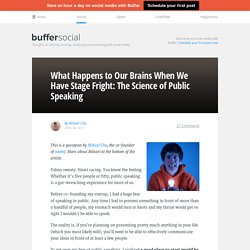 More about Mikael at the bottom of the article. Palms sweaty. Heart racing. You know the feeling. Whether it’s five people or fifty, public speaking is a gut-wrenching experience for most of us. Before co-founding my startup, I had a huge fear of speaking in public. The reality is, if you’re planning on presenting pretty much anything in your life (which you most likely will), you’ll need to be able to effectively communicate your ideas in front of at least a few people. To get over my fear of public speaking, I realized a good place to start would be to understand why I was getting stage fright in the first place.

I thought it would be interesting to share with you my research for how I learned to overcome my fear of public speaking in the last year while founding a company. What is stage fright really As humans, we’re hardwired to worry about our reputation above almost all things. What happens in our brain 1. 2. 3. 1. 2. Using Appropriate Language. Summary: This handout will cover some of the major issues with appropriate language use: levels of language formality, deceitful language and euphemisms, slang and idiomatic expressions; using group-specific jargon; and biased/stereotypical language. 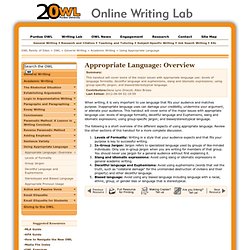 Contributors:Dana Lynn Driscoll, Allen BrizeeLast Edited: 2012-06-04 02:19:59 When writing, it is very important to use language that fits your audience and matches purpose. Inappropriate language uses can damage your credibility, undermine your argument, or alienate your audience. This handout will cover some of the major issues with appropriate language use: levels of language formality, deceitful language and Euphemisms, slang and idiomatic expressions; using group-specific jargon; and biased/stereotypical language. The following is a short overview of the different aspects of using appropriate language. Levels of Formality: Writing in a style that your audience expects and that fits your purpose is key to successful writing. Email Etiquette. Summary: Although instant and text/SMS messaging is beginning to supplant email for some groups' primary means of Internet communication, effective and appropriate email etiquette is still important. 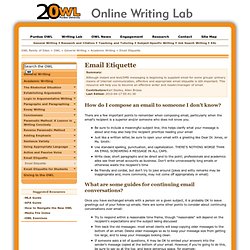 This resource will help you to become an effective writer and reader/manager of email. Contributors:Karl Stolley, Allen BrizeeLast Edited: 2010-04-17 05:41:30 How do I compose an email to someone I don't know? How to Write a Business Email. Business emails are generally less formal than business letters. 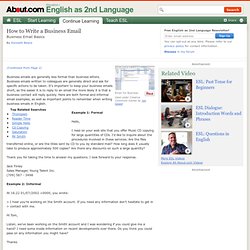 Business emails written to colleagues are generally direct and ask for specific actions to be taken. It's important to keep your business emails short, as the easier it is to reply to an email the more likely it is that a business contact will reply quickly. Here are both formal and informal email examples, as well as important points to remember when writing business emails in English.