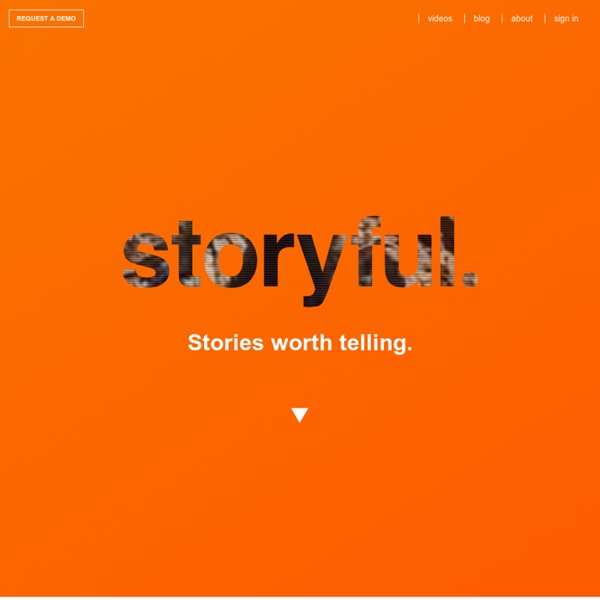 Cédrick Moré M@gic E-business Success. Simple. Real. SBI! changes more than business. 26 Web Designs for the Food Industry - Web Design Blog – DesignM.ag Get the FlatPix UI Kit for only $7 - Learn More or Buy Now When you think of your favorite fast food place, the last thing that come to mind is their website. In today’s showcase, you will see 26 web designs from some of the top names in the food industry. McDonald’s

Knight Prototype Fund announces funding for 18 new projects Eighteen projects aimed at improving journalism or media are each receiving $35,000 in seed funding from Knight Foundation as part of the latest round of funding from the Knight Prototype Fund, the foundation just announced. (Disclosure: Knight also funds Nieman Lab, though not through the Prototype Fund.) Many of the more journalistically focused projects in this round of funding involve audience engagement and how to better solicit and accept user-generated content. Public Radio International is building a system to allow readers to respond to news articles by integrating prompts into the body of stories.

Futurist Speaker Thomas Frey - Messing with the Reality of Reality Next Generation Gaming is Not for the Faint of Heart Life is a game. Every day we find ourselves in the middle of the game, involving the work we do, the people we hang out with, and the social structures that surround us. 12 Awesome websites with continuous scrolling We have already seen the continuous scrolling effect in sites like Google Reader or Tumblr, but this trend is growing strong. It can be a smoother solution to show more content on a site than pagination, as it does not require to refresh the page and dynamic loading makes the site faster. We have selected some of the best continuous scrolling websites for your viewing pleasure. Be careful not to hurt your index finger because once you scroll, you can't stop!

On the hunt for attention, media outlets gamify the news And now, for their next reader-engagement trick, publishers are taking a few lessons from your PlayStation. The world of video games is coming to the news. While publishers are used to telling stories in text and, recently, in video, some are looking to add a dose of interactivity to their news in an effort to attract more readers and keep them around longer. Last week, Al Jazeera launched “Pirate Fishing,” an online game that puts players in the role of a journalist as he investigates an illegal fishing trade. Players, who start as “junior researchers” get points by watching videos and filing clips in their notebooks, helping them earn “senior reporter” positions and ” specialist badges.” The game was based of an Al Jazeera video series originally published in 2012.

Download Graphic Images from the Hillis/Bull Lab Return to "Download Files" Page You are welcome to download the following graphic image of the Tree of Life for non-commercial, educational purposes: Tree of Life (~3,000 species, based on rRNA sequences) (pdf, 368 KB) (see Science, 2003, 300:1692-1697) Want to Build a New App? There's an App for That, Too Competition in Apple’s App Store is so tough that even strong concepts must be planned to perfection before any development should start. So enter App Cooker: A hot new iPad app that makes sure other apps have the right ingredients in place before any development begins. App Cooker ($19.99) from Sophia-Antipolis, France-based Hot Apps Factory helps aspiring designers organize, plan and get app projects ready for production. 30-year-old Xavier Veyrat — the designer of App Cooker — spoke to Mashable about the development of the platform and the steps that go into creating a masterpiece app recipe. Have you always been into design?

Member Mind3Web About Me '13me2everyone 1.9 of me2everyone.com is here and members are making connections in Be Social... '13trafficera is the fastest growing internet marketing community online.This program is an absolute MUST for anyone that does any kind of business online. '13socialclump IS THE #1 PLACE TO GROW YOUR YOUTUBE, FACEBOOK, AND TWITTERWith SocialClump You Can...Get paid to be activeGrow your Twitter followersGrow your Facebook page likesGrow your Youtube subscribers... '13bz9 Business & Social Media SystemsGUARANTEED To IMPROVE YOUR Sales, Traffic & Lead Generation Put us to the test ... claim $100