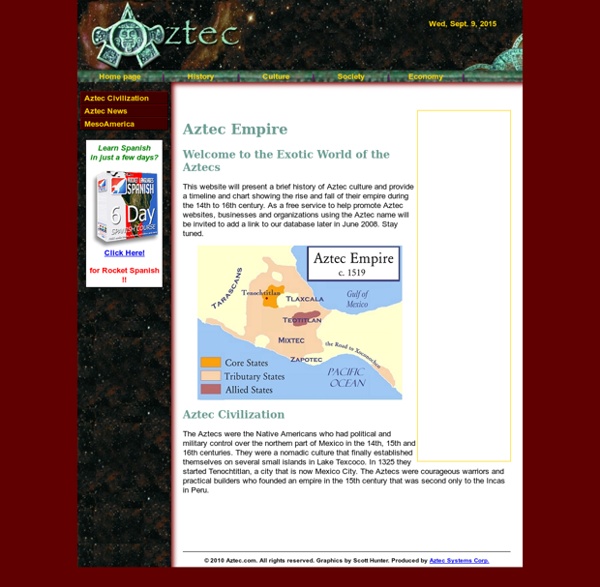 Welcome to the Exotic World of the Aztecs This website will present a brief history of Aztec culture and provide a timeline and chart showing the rise and fall of their empire during the 14th to 16th century. As a free service to help promote Aztec websites, businesses and organizations using the Aztec name will be invited to add a link to our database later in June 2008. Aztec Civilization The Aztecs were the Native Americans who had political and military control over the northern part of Mexico in the 14th, 15th and 16th centuries. Related:  Spanish Conquest of Americas • MEXICO

Welcome to the Aztec Civilization Website Aztec Empire The Aztec Empire dominated Mesoamerica from Mexico and Guatemala to the territories of Salvador and Honduras in the fifteenth and sixteenth centuries for almost one hundred years. This was at the same time as the Inca Empire in Peru. The Aztecs began their reign in 1427 after the leader, Itzcoatl, with the assistance of surrounding cities, defeated the Tepanecs and gained control of the Mexican basin. Tenochtitlan was a beautiful and well-run city. From where did the Aztec people migrate? Aztec Empire CE 1519 Describe the natural and man-made features of Tenochtitlan Questions and Answers map of the Aztec Empire in 1519 CE Aztec Timeline It's time to take a look at an Aztec timeline to get an overview of what happened during the times of this civilization. Collectively, the people of the allied Central Mexican and American city states between the 12th century CE (AD) and the 15th century Spanish invasion are commonly referred to as the Aztecs. The Aztec empire was controlled primarily by a political body called the Triple Alliance, made up of the Acolhua people of Texcoco, the Mexica in Tenochtitlán, and the Tepaneca people of Tlacopan. These three peoples, and three cities, were responsible for the domination of much of Mexico during the period we'll show in our Aztec timeline. The symbols for the 3 cities which would make up the famous Triple Alliance (see Aztec timeline below)(L to R) Texcoco, Tenochtitlán (Mexico), and Tlacopán Over time, Tenochtitlán became the primary city of the Triple Alliance, and the Mexica became the rulers of the empire. Foundation Of The Empire Building an Empire Height of the Empire

Provides a map of the aztec world by nlenoel May 21