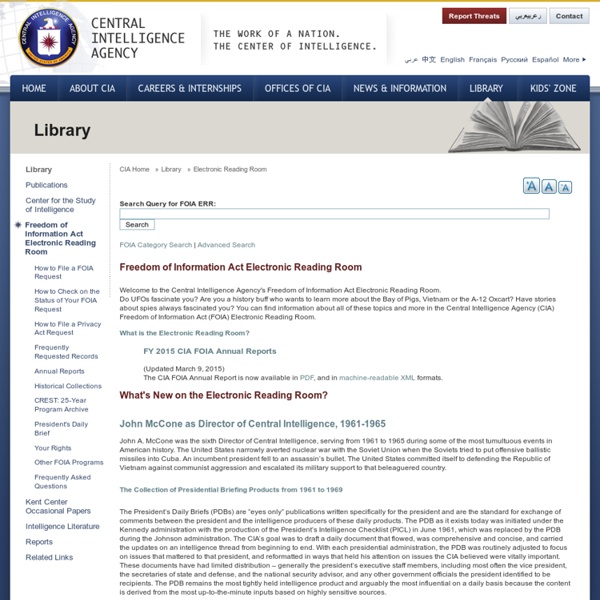 The National Security Archive December 9, 2014 Torture Report Finally Released Senate Intelligence Committee Summary of CIA's Detention and Interrogation Program Concludes CIA Misled Itself, Congress, the President about Lack of Effectiveness. September 28, 2014 FBI The FBI’s Reading Room contains many files of public interest and historical value. In compliance with the National Archives and Records Administration (NARA) requirements, some of these records are no longer in the physical possession of the FBI, eliminating the FBI’s capability to re-review and/or re-process this material. Please note, that the information found in these files may no longer reflect the current beliefs, positions, opinions, or policies currently held by the FBI.

West Point Altas Collection About Our Atlases In 1938 the predecessors of today's Department of History at the United States Military Academy began developing a series of campaign atlases to aid in teaching cadets a course entitled, "History of the Military Art." Since then, the Department has produced over six atlases and more than one thousand maps, encompassing not only America’s wars but global conflicts as well. In keeping abreast with today's technology, the Department of History is providing these maps on the internet as part of the department's outreach program. New York Public Library Puts 20,000 Hi-Res Maps Online & Makes Them Free to Download and Use When I was a kid, my father brought home from I know not where an enormous collection of National Geographic magazines spanning the years 1917 to 1985. I found, tucked in almost every issue, one of the magazine’s gorgeous maps—of the Moon, St. Petersburg, the Himalayas, Eastern Europe’s ever-shifting boundaries.

Slavery in America Slavery in America Slavery in America began in 1607 and continued until 1865. These links tell you more about this controversial but, for a long time, legal practice. Slavery It's hard to imagine that people did these things to each other, but different times allowed different ideals. Your About Guide to African-American History reveals the terrible tragedy of slavery. Foes of Slavery These African-Americans are famous for fighting against slavery. The Rocker Box: Ghost Towns Here is a repository for ghost towns, almost ghost towns, stories of lost treasures, lost mines, and buried treasure, and other treasure information. Pick your state to find treasures and ghost towns in your area. Unlinked states will be added soon, so... Check back often! Do you know of other ghost towns or treasure stories?

Scout: History & Heritage 2 out of 5 based on 1 ratings About the Park: Welcome to Quechee State Park. Its location along US Route 4, and its proximity to many Upper... vtstateparks.com