Watch Charles Bowden on DN! "Murder City: Ciudad Juárez and the Global Economy’s New Killing Fields" Female homicides in Ciudad Juárez. After surveying 155 killings out of 340 documented between 1993 and 2003, a government committee found that roughly half were prompted by motives like robbery and gang wars, while a little more than a third involved sexual assault. 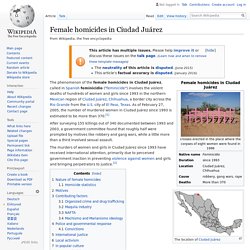 The murders of women and girls in Ciudad Juárez since 1993 have received international attention, primarily due to perceived government inaction in preventing violence against women and girls and bringing perpetrators to justice.[2] Nature of female homicides[edit] Evidence suggests that a specific group of women and girls are being targeted in Ciudad Juárez.[3][4] The victims share common characteristics, and there are many similarities in the violent crimes committed against them.[3][3][4] Most of the victims are young women who come from impoverished backgrounds and work in maquiladoras, as factory workers, in other sectors of the informal economy, or are students.[3][4] Homicide statistics[edit] total number of homicides in Juarez Motives[edit] 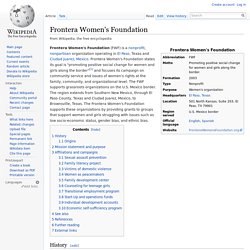 Frontera Women's Foundation states its goal is "promoting positive social change for women and girls along the border"[1] and focuses its campaign on community service and issues of women's rights at the family, community, and organizational level. The FWF supports grassroots organizations on the U.S. Mexico border. The region extends from Southern New Mexico, through El Paso County, Texas and Ciudad Juarez, Mexico, to Brownsville, Texas. The Frontera Women's Foundation supports these organizations by providing grants to groups that support women and girls struggling with issues such as low socio-economic status, gender bias, and ethnic bias. History[edit] Origins[edit] 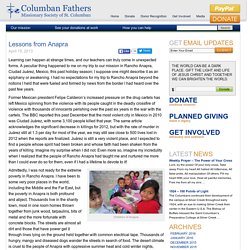 A peculiar thing happened to me on my trip to our mission in Rancho Anapra, Ciudad Juárez, Mexico, this past holiday season; I suppose one might describe it as an epiphany or awakening. I had no expectations for my trip to Rancho Anapra beyond the notions I held that were fueled and formed by news from the border I had heard over the past few years. Former Mexican president Felipe Calderon’s increased pressure on the drug cartels has left Mexico spinning from the violence with its people caught in the deadly crossfire of violence with thousands of innocents perishing over the past six years in the war with the cartels. The BBC reported this past December that the most violent city in Mexico in 2010 was Ciudad Juárez, with some 3,100 people killed that year. 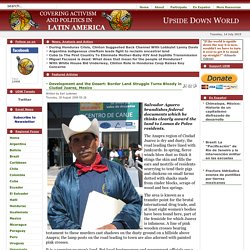 The Anapra region of Ciudad Juarez is dry and dusty, the road leading there lined with junkyards. In spring, fierce winds blow dust so thick it stings the skin and fills the ears and nostrils of residents scurrying to tend their pigs and chickens on small farms dotted with shacks made from cinder blocks, scraps of wood and box springs. The area is known as a transfer point for the brutal international drug trade, and at least eight women's bodies have been found here, part of the femicide for which Juarez is infamous. A line of pink wooden crosses bearing testament to these murders cast shadows on the dusty ground on a hillside above Anapra; the lamp posts on the road leading to town are also adorned with painted pink crosses. It is a seeming no-man's land. Veronica Leyva and Lomas de Poleo residents rally outside the municipal seat on April 10. Amalia Ortiz - Women of Juarez on Def Jam Poetry. INICIO.