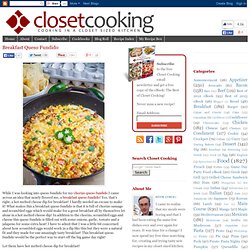 Yes, that's right, a hot melted cheese dip for breakfast! I hardly needed an excuse to make it! Chorizo Scrambled Eggs Breakfast Tacos. Often times weekday breakfasts are rushed and thus pretty simple so on the weekend I like to do something a little more. 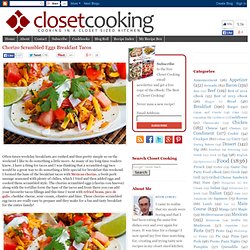 As many of my long time readers know, I have a thing for tacos and I was thinking that a scrambled egg taco would be a great way to do something a little special for breakfast this weekend. I formed the base of the breakfast tacos with Mexican chorizo, a fresh pork sausage seasoned with plenty of chilies, which I fried and then added eggs and cooked them scrambled style. The chorizo scrambled eggs (chorizo con huevos) along with the tortillas form the base of the tacos and from there you can add your favourite tacos fillings and this time I went with refried beans, pico de gallo, cheddar cheese, sour cream, cilantro and lime. Mexican Chorizo. Mexican chorizo is a tasty fresh pork sausage stuffed with chilies, garlic and other seasonings. 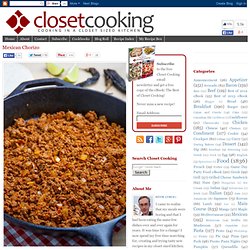 Unlike the Spanish sausage with the same name Mexican chorizo sausage needs to be cooked and you can find it along with the other fresh sausages in many grocery stores. Of course it is also easy to make at home, you pretty much just need to soak the chilies, puree them and mix them and the seasonings into some ground pork and let it sit in the fridge overnight. Of course you can stuff the chorizo into sausage casings but I generally just prefer to cook it like any ground meat in a pan, breaking it up. Chicken Fajitas. I had been craving some Texmex flavours for a while and in particular, fajitas were calling my name. 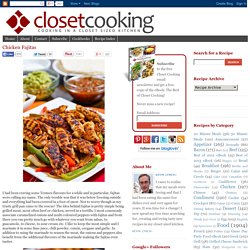 The only trouble was that it was below freezing outside and everything had been covered in a foot of snow. Not to worry though as my trusty grill pan came to the rescue! The idea behind fajitas is pretty simple being grilled meat, most often beef or chicken, served in a tortilla. I most commonly associate caramelized onions and multi coloured peppers with fajitas and from there you can pretty much go with whatever you want from salsas, to guacamole, to cheese, to sour cream etc. Pork Tinga Quesadillas. Sweet Chili Chicken and Avocado Enchiladas. Ever since I made the Thai inspired sweet chili chili dressing it has been haunting my dreams and I have been obsessing about using it again! 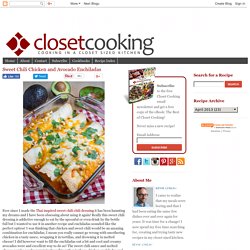 Really this sweet chili dressing is addictive enough to eat by the spoonful or even drink by the bottle full but I wanted to use it in another recipe and enchiladas sounded like the perfect option! I was thinking that chicken and sweet chili would be an amazing combination for enchiladas, I mean you really cannot go wrong with smothering chicken in a tasty sauce, wrapping it in tortillas, and drowning it in melted cheese!

I did however want to fill the enchiladas out a bit and cool and creamy avocados were and excellent way to do so! The sweet chili sauce and melted cheese combo works surprisingly well together in these chicken enchiladas and the avocados bring bring everything together! The sweet chili dressing works amazingly well in these enchiladas but you want to go easy on it so as not to overpower the other flavours. ingredients. Esquites (Mexican Corn Salad) If you like Mexican corn on the cob, elote, then you are going to love esquites which is essentially elote but served in a bowl, only better! 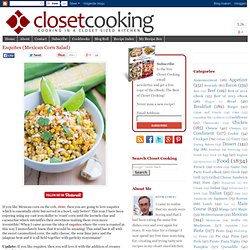 This year I have been enjoying using my cast iron skillet to 'roast' corn until the kernels char and caramelize which intensifies their sweetness making them even more irresistible! When I came across the idea of esquites where the corn is roasted in this way I immediately knew that it would be amazing! This salad has it all with the sweet caramelized corn, the salty cheese, the sour lime juice and the jalapeno heat and it is all held together with garlicky mayonnaise! Update: If you like esquites, then you will love it with the addition of creamy avocado! Carne Asada Tacos. Speaking of grilling, after making the carne asada a few weeks ago I have been obsessing about it and I just had to make it again. The carne asada is flank steak that is marinated in a tasty Mexican style mojo with orange juice, lime juice, garlic, jalapeno and cilantro and then grilled until a perfect medium rare, or well done if you prefer.

Chiles Rellenos. Chilis rellenos, or stuffed chilis, have been on my to try list for a while and when I came across some poblano peppers at the market this weekend I knew that it was finally time to make them. 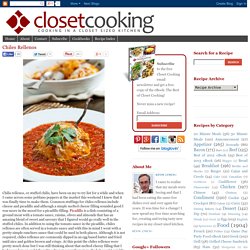 Common stuffings for chiles rellenos include cheese and picadillo and although a simple melted cheese filling sounded good I was more in the mood for a picadillo filling. Picadillo is a dish consisting of a ground meat with a tomato sauce, raisins, olives and almonds that has an amazing blend of sweet and savoury that I figured would go really well in the stuffed chiles. In addition to using the tomato sauce in the picadillo, chiles rellenos are often served in a tomato sauce and with this in mind I went with a pretty simple ranchero sauce that could be used in both places.

Picadillo. Bacon Wrapped Jalapeno Popper Burgers. With grilling season here I have been thinking about burgers a lot more and this idea for jalapeno popper burgers has been haunting my dreams all winter! 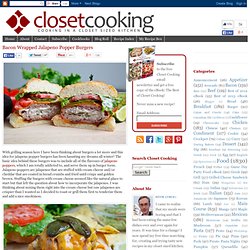 The basic idea behind these burgers was to include all of the flavours of jalapeno poppers, which I am totally addicted to, and serve them up in burger form. Jalapeno poppers are jalapenos that are stuffed with cream cheese and/or cheddar that are coated in bread crumbs and fried until crispy and golden brown. Stuffing the burgers with cream cheese seemed like the natural place to start but that left the question about how to incorporate the jalapenos. Sous Chef Recipe Clipper - Baked Cheddar Chicken Chimichangas. Shrimp Tacos. I made these a couple of weeks ago because I had a wicked craving for fish tacos and all I had on hand was shrimp. 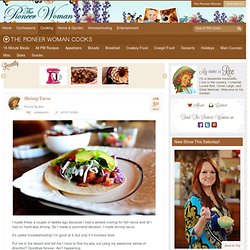 So I made a command decision: I made shrimp tacos. It’s called troubleshooting! I’m good at it, but only if it involves food. Put me in the desert and tell me I have to find my way out using my awesome sense of direction? Goodbye forever. Did you know I can spin Marlboro Man around a thousand times with his eyes closed and with his eyes still closed he can point in any direction and determine whether it’s north, south, east, or west simply because it’s so embedded in his being?

Chipotle Lime Fish Tacos. I was craving some Mexican food and keeping to my desire to try to get more fish in my diet, I decided that fish tacos would be the perfect fix! 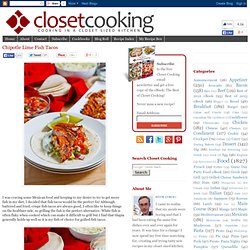 Although battered and fried, crispy fish tacos are always good, I often like to keep things on the healthier side, so grilling the fish is the perfect alternative. White fish is often flaky when cooked which can make it difficult to grill but I find that tilapia generally holds up well so it is my fish of choice for grilled fish tacos. There are many different ways that you can season your fish for tacos but I always find myself coming back to the ever so simple chipotle and lime marinade.

The lime keeps things nice and bright and fresh and chipotle adds both spicy heat and some smokiness to the fish which is really nice. Besides the tortillas and the fish you can add whatever you desire to the tacos. Crispy Rolled Shrimp Tacos. Although I was out of town for most of the week leading up to Cinco de Mayo I did get the chance to celebrate by making a few Mexican inspired dishes the week before.

One of the recipes that I tried was these crispy shrimp tacos that I came across on White on Rice Couple who were in turn inspired by Rick Bayless recipe. Although I am an avid fan of tacos, I had never really considered rolling them and then frying them until golden brown and crispy and I was immediately fascinated by the idea. You really cannot go wrong using shrimp as a taco filling, especially not when the shrimp are coated in a quick, easy and tasty tomato based sauce. Best Fish Tacos Recipe. It wasn’t long ago that beef cheeks and pork cheeks went from being a throw-away cut of meat to a highly sought-after delicacy served in some of the priciest restaurants.

I’m willing to wager that fish cheeks will be next in line for this trend. So why do cheeks taste so good? Whether it’s a cow or cod, the cheek muscles get a lot of exercise and they also store a lot of fat. Just as chicken leg meat has more flavor than breast meat, muscles that get exercised have more flavor. In the case of fish, the cheeks are plump and moist, with a pleasantly fibrous texture that’s a dead ringer for scallops.

Cheeseburger Quesadillas Recipe. Cheeseburger quesadillas have quickly become one of our favorite weekend treats. It’s easy to see why. Filled with steakhouse hamburgers, caramelized onions, a little salad, cheese, and a special sauce, they are filling and memorable! The best part? They taste a whole lot more complicated than they are to make. My husband actually first requested that I make these cheeseburger quesadillas after having them for lunch with one of his friends at Applebees restaurant. First, I start by making steakhouse style hamburgers. Then, I started cooking onions to caramelize for these cheeseburger quesadillas. Breakfast Chorizo Quesadilla Topped with a Fried Egg. Guacamole. Roasted Tomato Salsa.

Recipe for Lisa's Cross-Cultural Salsa with Tomato, Avocado, Lime, and Feta. Carne Asada Recipe. If you don't have a grill you can use a well-seasoned grill pan or a large cast iron pan on the stove-top. Heat on high to sear and then lower the heat to finish cooking. Make sure to use your stove vent, searing the steak this way can smoke up the kitchen! Method 1 Lay the steak in a large non-reactive bowl or baking dish. Combine marinade ingredients and pour the marinade over the steak. Carne Asada Tacos. Baked Chicken Chimichangas Recipe. Baked Chicken Chimichangas Recipe Tags Add tags to help organize recipes in your box. ( Add Tags ) Ingredients ( Edit ) 2 cups cooked chicken, chopped or shredded 1 cup of your favorite salsa 1 teaspoon ground cumin 1/2 teaspoon dried oregano leaves, crushed 1 cup shredded cheddar cheese 2 green onions, chopped (about 1/4 cup) Chicken & Cheese Quesadilla Pie Recipe.