Ethnic Music of the Americas

History of Classical Music - Eras. This is the first period where we can begin to be fairly certain as to how a great deal of the music which has survived actually sounded. 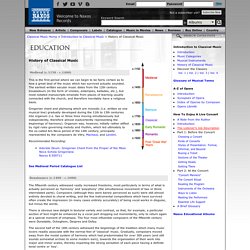 The earliest written secular music dates from the 12th century troubadours (in the form of virelais, estampies, ballades, etc.), but most notated manuscripts emanate from places of learning usually connected with the church, and therefore inevitably have a religious basis. Gregorian chant and plainsong which are monodic (i.e. written as one musical line) gradually developed during the 11th to 13th centuries into organum (i.e. two or three lines moving simultaneously but independently, therefore almost inadvertently representing the beginnings of harmony). Johann Sebastian Bach. Johann Sebastian Bach was better known as a virtuoso organist than as a composer in his day. 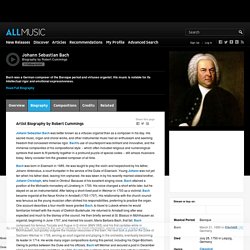 His sacred music, organ and choral works, and other instrumental music had an enthusiasm and seeming freedom that concealed immense rigor. Bach's use of counterpoint was brilliant and innovative, and the immense complexities of his compositional style -- which often included religious and numerological symbols that seem to fit perfectly together in a profound puzzle of special codes -- still amaze musicians today. Many consider him the greatest composer of all time. Bach was born in Eisenach in 1685. Instruments - Classical Music in the 21st Century. Reggae: Instruments. 10 Best Reggae Artists of All Time - EnkiVillage. Reggae Music and Reggae History 101. By Megan Romer The Beginning: Reggae is a genre that grew out of several other musical styles, including both traditional and contemporary Jamaican music, like ska and mento, as well as American R&B. 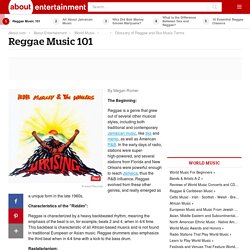 The Blues in America: Learn About the History & the Artists. Instruments Used to Play the Blues. If you have ever been at a bar that had a band playing blues music, or popped in a blues cd, you know the music doesn’t really sound like any other genre of music. 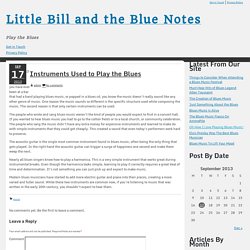 One reason the music sounds so different is the specific structure used while composing the music. The second reason is that only certain instruments can be used. The people who wrote and sang blues music weren’t the kind of people you would expect to find in a concert hall. If you wanted to hear blues music you had to go to the cotton fields or to a local church, or community celebration. The people who sang the music didn’t have any extra money for expensive instruments and learned to make do with simple instruments that they could get cheaply. Robert Johnson Blues Foundation. One hundred years ago, a boy-child was born in Mississippi – a dirt-poor, African-American who would grow up, learn to sing and play the blues, and eventually achieve worldwide renown. 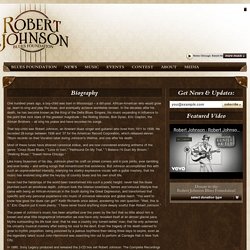 In the decades after his death, he has become known as the King of the Delta Blues Singers, his music expanding in influence to the point that rock stars of the greatest magnitude – the Rolling Stones, Bob Dylan, Eric Clapton, the Allman Brothers – all sing his praise and have recorded his songs. That boy-child was Robert Johnson, an itinerant blues singer and guitarist who lived from 1911 to 1938. He recorded 29 songs between 1936 and ‘37 for the American Record Corporation, which released eleven 78rpm records on their Vocalion label during Johnson¹s lifetime, and one after his death. Like many bluesmen of his day, Johnson plied his craft on street corners and in jook joints, ever rambling and ever lonely – and writing songs that romanticized that existence. Robert Johnson — Free listening, videos, concerts, stats and photos at Last.fm. Types of Native American Instruments. Native American music. Native American music. 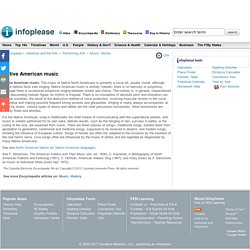 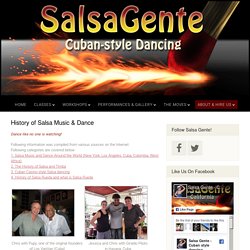 Following information was compiled from various sources on the Internet Following categories are covered below:1. Salsa Music and Dance Around the World (New York, Los Angeles, Cuba, Colombia, West Africa)2. The History of Salsa and Timba3. Cuban Casino style Salsa dancing4. History of Salsa Rueda and what is Salsa Rueda New York (USA) Salsa Music During the 1940s and 50s, Cuban musicians had a huge influence on the New York music scene.But once Fidel came to power, diplomatic relations fell apart between Cuba and the US. 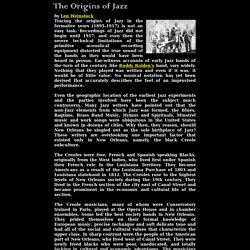 Jazz Instruments. A music genre that sprang up in the early 20th century in the African-American community came to be known as jazz. 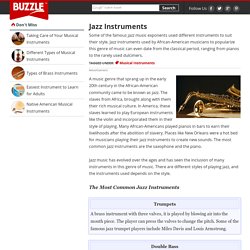 The slaves from Africa, brought along with them their rich musical culture. In America, these slaves learned to play European instruments like the violin and incorporated them in their style of playing. Many African-Americans played pianos in bars to earn their livelihoods after the abolition of slavery. Places like New Orleans were a hot bed for musicians playing their jazz instruments to create new sounds.

Sarah Vaughan — Free listening, videos, concerts, stats and photos at Last.fm. About Sarah Vaughan. Jazz critic Leonard Feather called her “the most important singer to emerge from the bop era.” 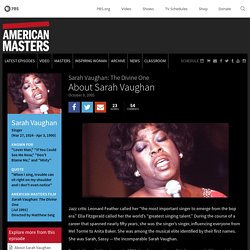 Ella Fitzgerald called her the world’s “greatest singing talent.” During the course of a career that spanned nearly fifty years, she was the singer’s singer, influencing everyone from Mel Torme to Anita Baker. She was among the musical elite identified by their first names. She was Sarah, Sassy — the incomparable Sarah Vaughan. Born in Newark, New Jersey, in 1924, Vaughan was immediately surrounded by music: her carpenter father was an amateur guitarist and her laundress mother was a church vocalist. When Eckstine formed his own band soon after, Vaughan went with him.