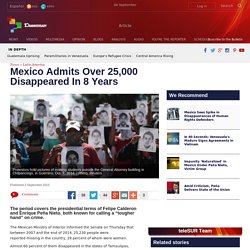 The Mexican Ministry of Interior informed the Senate on Thursday that between 2007 and the end of 2014, 25,230 people were reported missing in the country, 28 percent of whom were women. Almost 60 percent of them disappeared in the states of Tamaulipas, Jalisco, Nuevo León, México, Chihuahua and Sinaloa, according to the annual National Register of Disappeared or Missing People, released by the Ministry of Interior, the Attorney General's Office, and the Office of National System of Public Security.

By 2014, around 36,656 people had been located, 34,829 of them alive. RELATED: Remembering Latin America’s Disappeared This figure coincides with a report released earlier in August by various human rights groups in Mexico, which counted more than 26,000 cases in the same time period. RELATED: Justice for Ayotzinapa. 60 Mass graves found since #Ayotzinapa disappearances. Mexico: 60 Graves Found Since Ayotzinapa Disappearances. Hundreds of activists and relatives of the 43 missing students took the streets of Mexico City to demand justice. ​ 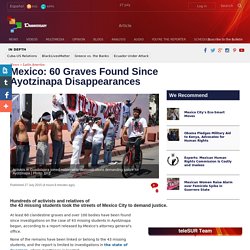 At least 60 clandestine graves and over 100 bodies have been found since investigations on the case of 43 missing students in Ayotzinapa began, according to a report released by Mexico's attorney general's office. None of the remains have been linked or belong to the 43 missing students, and the report is limited to investigations in the state of Guerrero, where Ayoztinapa is located. The report, obtained by the Associated Press news agency, shows that these numbers are not definitive and could be higher, given that the document only ranges from October 2014 to May this year. 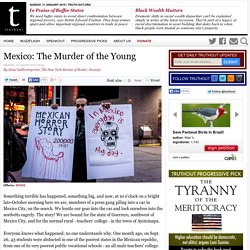 We hustle our gear into the car and lock ourselves into the seatbelts eagerly. The story! We are bound for the state of Guerrero, southwest of Mexico City, and for the normal rural - teachers' college - in the town of Ayotzinapa. Everyone knows what happened; no one understands why. This is by no means the largest or even necessarily the most horrifying mass killing to have taken place in Mexico in recent years, but it is the most known: We know the perpetrators (the local police and the local drug gangs), the victims (43 young men whose pictures are now everywhere), and their families, stoic hard workers - campesinos, many of them - who have refused to back down from their demand that their missing children be returned to them alive.

Corruption in Iguala defies belief. Families of 43 missing Mexican students to open their own search after 'corrupt system' fails them. Mexico on brink: Protesters clash with riot police over student massacre. ‘Enough, I’m Tired’: Mexican Leader’s Comment in Wake of 43 Missing Students Feared Dead Incites Outrage. MEXICO CITY (TheBlaze/AP) — An off-the-cuff comment by Mexico’s attorney general to cut off a news conference about the apparent killing of 43 missing college students has been taken up by protesters as a rallying cry against corruption and drug trade-fueled violence. 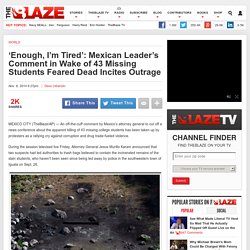 During the session televised live Friday, Attorney General Jesus Murillo Karam announced that two suspects had led authorities to trash bags believed to contain the incinerated remains of the slain students, who haven’t been seen since being led away by police in the southwestern town of Iguala on Sept. 26. This is the site near the town of Cocula, Mexico, pictured on Saturday, Nov. 8, 2014, where according to investigators, drug gang members made 43 teachers college students disappear, piling their bodies like cord wood on a pyre that burned for 15 hours and then wading into the ashes to pulverize, bag and dispose of remaining teeth and bones. 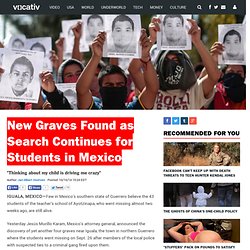 Yesterday Jesús Murillo Karam, Mexico’s attorney general, announced the discovery of yet another four graves near Iguala, the town in northern Guerrero where the students went missing on Sept. 26 after members of the local police with suspected ties to a criminal gang fired upon them. The new graves are apparently located just a stone’s throw from five other graves found last weekend that contained 28 bodies. It’s still not clear how many bodies were discovered yesterday, he said, and establishing their identity will most likely take forensic investigators several weeks.

Images sur Twitter : "New Graves Found as Search for Missing Students in Mexico Continues... Giant fissure opens in North Mexico. MexicAnarchist : There were clashes between... The Connection Between the Drug War In Mexico and Neoliberal Policies. MexicAnarchist : Photo reportedly from the... Roblesmaloof : Mexican Journalists demostration... Why Mexico's Drug War Is Not About Drugs. 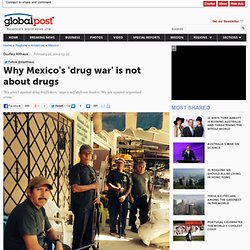 (Dudley Althaus/GlobalPost) TIERRA COLORADA, Mexico — Major events these days in Mexico's seven-year-long criminal conflict have precious little to do with a war on drugs. In the past year, the capture of town after town by volunteer police and citizen militias in the Pacific coast states of Michoacan and Guerrero has roiled and embarrassed President Enrique Pena Nieto's government. Officials have dispatched thousands of troops and militarized police to contain the “self-defense” groups, which claim they're filling a vacuum left by incompetent or corrupt officials.

But many of the civilians taking on the gangs that control the region say they care little about illicit narcotics, which have been supplying US and Mexican consumers for decades. “We aren't against drug traffickers,” he says. That view mocks former President Felipe Calderon. “It’s understandable. “The problem isn't drugs, it doesn't impact public activity.”