10 Books Every Artist Must Read 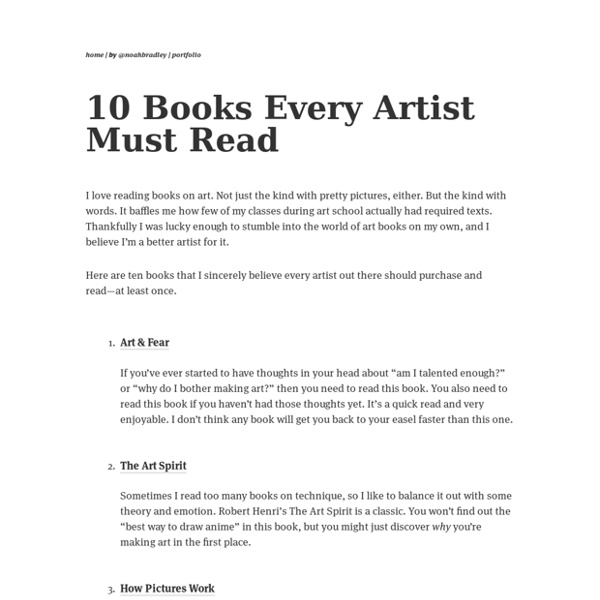 I love reading books on art. Not just the kind with pretty pictures, either. But the kind with words. It baffles me how few of my classes during art school actually had required texts. Thankfully I was lucky enough to stumble into the world of art books on my own, and I believe I’m a better artist for it. Here are ten books that I sincerely believe every artist out there should purchase and read—at least once. Art & FearIf you’ve ever started to have thoughts in your head about “am I talented enough?” And there we have it. Do your art a favor and read any of these you haven’t already. Looking for more good books? And now check out my follow up, 10 Books Every Artist Must Read (that have nothing to do with making art).

Sculptris Ecorche 01 Yesterday I started doing an ecorche in sculptris. Not enough people give Z-brush's new younger brother enough credit, so I thought I’d see if I could do a serious anatomical study in it. It occurred to me this afternoon that it might be worthwhile to document it here. So, without further ado, Sculpting an ecorche in Sculptris... I started by doing anatomical drawings showing the origins and insertions of the first muscle groups I would be sculpting: pectoralis major and the biceps brachii. Next I looked at the attachment of the serratus anterior, the external obliques, and the rectus abdominus (abs). When it came to the actual sculpting, I worked on top of a freely available .obj file of a skeleton from Joel Mongeon’s site. As I learned more about the program and better managed the detail in my objects, things got a lot easier. So, here’s my progress after one night sculpting.

10 Books Every Artist Must Read (that have nothing to do with making art) The 4-Hour Workweek Tim Ferriss gets a bad rap. His polarizing personality seems to distract from the content of his books. Your Money or Your Life The single most important book on personal finance you can read. I Will Teach You To Be Rich Yes, the title is terrible. How to Win Friends & Influence People You need to read this. Anything You Want Derek Sivers offers the fascinating perspective of an artist who almost inadvertently wandered into the world of business. Permission Marketing One of the best Seth Godin books out there. All Marketers Are Liars Seth Godin’s so good, he gets two books on the list. The Power of Habit Habits control us. Influence Why do people do the things they do? 22 Immutable Laws of Marketing Simple, concise, and accurate.

The Art of Freelancing · Everything I Wish They Had Taught Me in Art School 10 Tips for Becoming a Hotshot Character Concept Artist | CGVILLA Every artist want to be a well known artist that can be identified by anyone in the industry. He or she wants to work on film, television or in games. But despite that we don’t know how to achieve our goal. We are hopeful that provided article will be helpful for you to achieve your goal and can be a guide to a good career in character design. Master the Fundamentals You must focus on fundamental areas of drawing and painting. Learn how to explore shapes. combining those try to create your character. Know Your Audience Knowing your audience is very important. If, on the other hand, you’re designing a character for the next big comic book movie targeting adults in their 20s and 30s, realism will probably be received in a much better light. Create Something Original Unique thinks attracts everyone in a large scale. Think unique all the time. Tell a Story In a character there are things that has a story behind and they tell their story by itself. Flesh It Out Love What You Do, Not What You Make

Another Note The Los Angeles BB Murder Cases: Page 01 Prologue Another Note - The Los Angeles BB murder files When Beyond Birthday committed his third murder, he attempted an experiment. No, no, no, no, no. Not this style, not this narrative voice—I’ll never manage to keep up this arch tone all the way through. increase the value of these notes. I hardly need to remind the reader about the epic battle between the century’s greatest detective, L, and that grotesque murderer, Kira. To hell with Kira. What matters to me is L. The century’s greatest detective. them for someone to find. may not have been able to succeed him, but I want to leave this behind. So what you’re reading now are my notes about L. I am one of the few people who ever met L as L.

Hourly rate or project fee: What makes freelancers more money? We all know that figuring out what to charge is one of the most nerve-wracking parts about freelancing. There are two main ways to charge for your work: per hour or per project. This has long been a topic of debate for freelancers. Will the client reject a high hourly rate? We’re not going to come down on a side, but we do want to tell you which solution is best for your type of work and project: 1. Hourly. 2. Hourly. Charging per hour is generally a good way to make sure that clients respect your time and communicate only when they need to. 3. Project. Charging per project is also the easiest way to increase your rates and test out your market’s tolerance for higher rates. 4. Hourly or Project. However, it is possible to combat scope-creep when you charge a project fee; you just have to be confident when you ask for a contract amendment or an additional contract to cover those expenses. 5. Project. 6. Project. 7. Project. Chances are you’re going to feel cheated. 8. Project.

8 Contract Provisions Every Freelancer Should Know If you've been freelancing for any amount of time, you've probably heard how important it is to get your client agreements in writing. As a former freelance writer and now lawyer who works with freelancers, I won't tell you otherwise. It's not just that a good contract can protect you if a client relationship goes south – it's that a good contract helps avoid misunderstandings before they start. The very act of putting a contract together forces you and your client to articulate and clarify your expectations up front. That said, some parts of a contract can be more important than others. 1. The Scope of Work (or sometimes the "Statement of Work") is a common source of trouble for freelancers. 2. Who actually owns that logo you're designing, you or your client? 3. Clients often request changes even when you give them what they originally asked for. 4. Few things cause more disruption in a freelancer's life than a client suddenly moving up a deadline. 5. 6. 7. 8.

Kleerup + Lykke Li – Until We Bleed (PatrickReza Dubstep Remix Fans of The Music Ninja know PatrickReza very well. The 19 year old original/remix Dubstep producer from Los Angeles, California has hijacked the top charts of hypem numerous time with his delicately crafted remixes. There are american producers that have gone the full brostep route, and there are others who still remain purist to the genre. PatrickReza is right in the middle and sometimes we don’t even know where he is. It is available for free today on his soundcloud. Download: Kleerup + Lykke Li – Until We Bleed (PatrickReza Dubstep Remix) Related items: PatrickReza Instagram for illustrators - 10 basic tips for gaining great followers — Ohn Mar Win Illustration This is not a definitive guide for gaining follows - it’s based on my own personal experience since I started in September 2014. Please do not be tempted to 'buy' follows or likes - a few clicks in the profile link will reveal if someone has 200 FB follows and 10K on IG...something doesn't add up! Here are 10 quite simple tips... 1) Make art everyday. 2) Aim to post 2-3 times a day roughly 4/5 hours apart so followers see fresh images throughout the day on your feed. 3) Content.