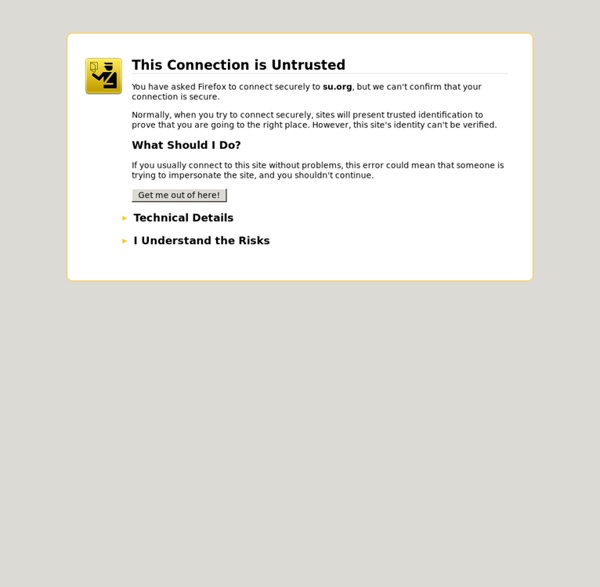 The Nine Planets Centre for Entrepreneurial Learning Thinking Machine 4 Thinking Machine 4 explores the invisible, elusive nature of thought. Play chess against a transparent intelligence, its evolving thought process visible on the board before you. The artwork is an artificial intelligence program, ready to play chess with the viewer. Play the game. Image Gallery View a range of still images taken from Thinking Machine 4. About the work More information about the project and answers to common questions. Credits Created by Martin Wattenberg, with Marek Walczak. About the artists Martin Wattenberg's work centers on the theme of making the invisible visible. Marek Walczak is an artist and architect who is interested in how people participate in physical and virtual spaces.

Life As A Backwards Train Journey. If you sit on the train with your back to the engine you get an entirely different perspective on the journey. You see things only as places you've been as they move away from you into the past. Of course you can see the parallel that I'm thinking of here. Much like experiences in life. We are only able to see what we have done or where we have been as though it were the train journey, a brief instance parallel, in the moment, then it slips away into the past. Even the people we travel with are much in parallel to life. Much of the time I find it difficult not to fall in love on the train (all too frequently), but these (much like my life) are only fleeting crushes that never reach any level of requitement. Even here the better off exclude themselves from the “riff-raff”, cosseting themselves in their elitist first class carriages, economic circumstance standing between us and them. Even the activities we undertake separate us further. Though I do feel somewhat like Methuselah.

The Singularity Is Near The Singularity Is Near: When Humans Transcend Biology is a 2005 non-fiction book about artificial intelligence and the future of humanity by inventor and futurist Ray Kurzweil. This is his first book to embrace the Singularity as a term, but the ideas contained within are derived from his previous books, the The Age of Spiritual Machines (1999) and The Age of Intelligent Machines (1990). Kurzweil describes his law of accelerating returns which predicts an exponential increase in technologies like computers, genetics, nanotechnology, robotics and artificial intelligence. He says this will lead to a technological singularity in the year 2045, a point where progress is so rapid it outstrips humans' ability to comprehend it. Irreversibly transformed, people will augment their minds and bodies with genetic alterations, nanotechnology, and artificial intelligence. Content[edit] Exponential growth[edit] Computational capacity[edit] Moore's Law The brain[edit] Exponential Growth of Computing

jabberwacky - live chat bot - AI Artificia Various Train Based Rants. Once again caught amongst the hassled, the harassed, the homeward bound. The air fraught with tension, thick with aggression, and testosterone. Too small a train stuffed to the gunnels with too many people. The more often I travel this way, the more palatable the taste of the stress around me. I feel the stress around me, building in myself incrementally, almost by osmosis. Irregularly see people around me shouting at each other, gesticulating, or just marked deeply, dreadfully, in their faces. Perspective. It occurs to me that no matter how rich, how famous, or how powerful, in the ultimate reckoning you are in fact completely unimportant. “This is a district line train to Ealing Broadway”, Crowded morning tube, Smell of suntan cream, Wafts with it, Memories of lovers lost and past, Reverie only broken by the incessant rustle of the free papers, In the tomb like quiet, Self conscious laughter, As unfamiliar proximity, Causes momentary embarrassment.