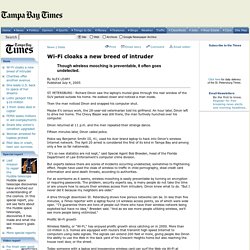 By ALEX LEARY Published July 4, 2005 ST. PETERSBURG - Richard Dinon saw the laptop's muted glow through the rear window of the SUV parked outside his home. He walked closer and noticed a man inside. Then the man noticed Dinon and snapped his computer shut. Maybe it's census work, the 28-year-old veterinarian told his girlfriend. Dinon returned at 11 p.m. and the men repeated their strange dance. Fifteen minutes later, Dinon called police. Police say Benjamin Smith III, 41, used his Acer brand laptop to hack into Dinon's wireless Internet network. "It's so new statistics are not kept," said Special Agent Bob Breeden, head of the Florida Department of Law Enforcement's computer crime division. But experts believe there are scores of incidents occurring undetected, sometimes to frightening effect. For as worrisome as it seems, wireless mooching is easily preventable by turning on encryption or requiring passwords.

USATodayPWF. Cops: ‘Open’ WiFi connections a risk. By: Rohit Alok A week-long mission of the Navi Mumbai police to locate unsecured WiFi connections in the region found more than 70 unprotected Internet sources that were easily accessible. 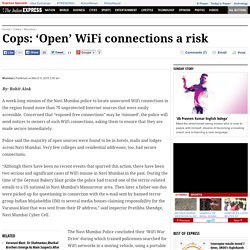 Concerned that “exposed free connections” may be ‘misused’, the police will send notices to owners of such WiFi connections, asking them to ensure that they are made secure immediately. Police said the majority of open sources were found to be in hotels, malls and lodges across Navi Mumbai. Very few colleges and residential addresses, too, had secure connections. “Although there have been no recent events that spurred this action, there have been two serious and significant cases of WiFi misuse in Navi Mumbai in the past.

The Navi Mumbai Police concluded their ‘WiFi War Drive’ during which trained policemen searched for WiFi networks in a moving vehicle, using a portable computer, smartphone or personal digital assistant (PDA). FAQ: Wi-Fi mooching and the law. The recent arrest of a Florida man on charges of unauthorized use of a wireless network could set legal ground rules for open Wi-Fi access. 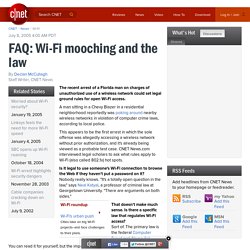 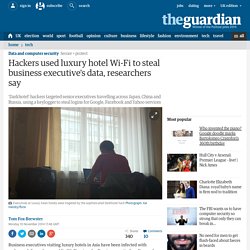 The so-called ‘Darkhotel’ hackers managed to tweak their code to ensure that only machines belonging to specific targets were infected, not all visitors’ PCs, and may have included state-sponsored hacking. They also seemed to have advance knowledge of their victims’ whereabouts and which hotels they would be visiting, Kaspersky said. CEOs, senior vice presidents, sales and marketing directors and top research and development staff were amongst those on the attackers’ hit list, though no specific names have been revealed.

As soon as they logged onto the hotel Wi-Fi, targets would be greeted with a pop-up asking them to download updates to popular software, such as GoogleToolbar, Adobe Flash and Windows Messenger. Teen hacker Owen Walker won’t be convicted. Back in April, 18 year-old Owen Thor Walker a.k.a AKill pleaded guilty to 6 charges of cybercrime in a New Zealand court. 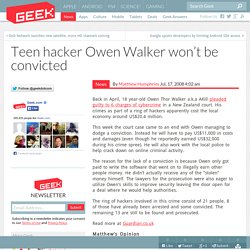 His crimes as part of a ring of hackers apparently cost the local economy around US$20.4 million. This week the court case came to an end with Owen managing to dodge a conviction. Instead he will have to pay US$11,000 in costs and damages (even though he reportedly earned US$32,000 during his crime spree). He will also work with the local police to help crack down on online criminal activity. The reason for the lack of a conviction is because Owen only got paid to write the software that went on to illegally earn other people money. The ring of hackers involved in this crime consist of 21 people. 8 of those have already been arrested and some convicted.

Freed hacker could work for police. Nine months ago Whitianga teenager Owen Walker faced the possibility of extradition by the FBI for cyber crime. 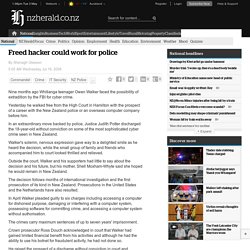 Yesterday he walked free from the High Court in Hamilton with the prospect of a career with the New Zealand police or an overseas computer company before him. In an extraordinary move backed by police, Justice Judith Potter discharged the 18-year-old without conviction on some of the most sophisticated cyber crime seen in New Zealand.

Walker's solemn, nervous expression gave way to a delighted smile as he heard the decision, while the small group of family and friends who accompanied him to court looked thrilled and relieved. Outside the court, Walker and his supporters had little to say about the decision and his future, but his mother, Shell Moxham-Whyte said she hoped he would remain in New Zealand. The decision follows months of international investigation and the first prosecution of its kind in New Zealand. Continued below. Cartoon: Faafoi steps aboard Labour's dinghy. Long prison term for Lowe's wi-fi hacker. A 21-year-old Michigan man was sentenced to nine years in federal prison Wednesday in federal court in Charlotte, North Carolina for his role in a failed scheme to steal credit card numbers from the Lowe's chain of home improvement stores by taking advantage of an unsecured wi-fi network at a store in suburban Detroit. 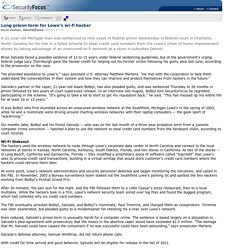 Brian Salcedo faced a possible sentence of 12 to 15 years under federal sentencing guidelines, but at the government's urging federal judge Lacy Thornburgh gave the hacker credit for helping out his former victim following his guilty plea last June, according to the prosecutor on the case. "He provided assistance to Lowe's," says assistant U.S. attorney Matthew Martens. Smartphones and public wi-fi ‘Evil Twin’ attacks. “Switch off the wi-fi connection on your smartphone when you leave home” is the latest advice being suggested after an experiment testing public trust of open wi-fi connection hotspots by UK newspaper The Guardian. 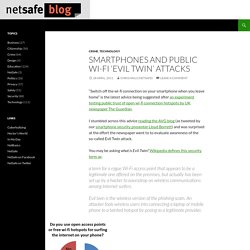 I stumbled across this advice reading the AVG blog (as tweeted by our smartphone security presenter Lloyd Borrett) and was surprised at the effort the newspaper went to to evaluate awareness of the so-called Evil Twin attack. You may be asking what is Evil Twin? Wikipedia defines this security term as: Wi-Fi security flaw for smartphones puts your credit cards at risk. Millions of smartphone users and BT customers who use Wi-Fi wireless internet "hotspot" connections in public are vulnerable to fraud and identity theft, a Guardian investigation has established. 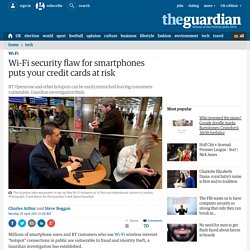 In tests conducted with volunteers – to avoid breaching telecommunications and computer misuse laws – security experts were able to gather usernames, passwords and messages from phones using Wi-Fi in public places. In the case of the best-selling Apple iPhone 4 and other smartphone handsets, the information could be harvested without the users' knowledge and even when they were not actively surfing the web if the phone was turned on. BT, the UK's biggest provider of such hotspots with five million of its "Openzone" connections in the UK in train stations, hotels and airports, admitted that it has known of the weakness for "years" and that it is working on a permanent fix. But it has no timetable for when it might be implemented.

A number of people entered their details. WiFi Hacking not Always a Cyber Crime. If someone is assuming that hacking/breaking into a WiFi router for piggybacking on the router’s internet connection is illegal, then he/she needs to double check the same with the applicable CyberLaw. 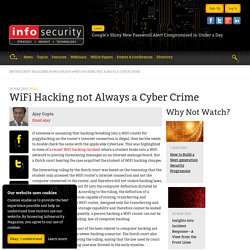 This was highlighted in view of a recent WiFi hacking incident where a student broke into a WiFi network to posting threatening messages on an internet message board. But a Dutch court hearing the case acquitted the student of WiFi hacking charges. The interesting ruling by the Dutch court was based on the reasoning that the student only accessed the WiFi router’s internet connection and not the computer connected to the router, and therefore did not violate hacking laws, because a WiFi router does not fit into the computer definition dictated by the law in the Netherlands. According to the ruling, the definition of a computer only includes devices capable of storing, transferring and processing data. Hacker Gets 8 Years in Prison, U.S. Attorney Warns ‘Hack and Steal At Your Own Peril, Consequence Is Prison Time’

Joshuah Allen Witt, a 35-year-old Seattle man, was sentenced to eight years in federal prison for his part in a three-man WiFi hacking and burglary ring. His two fellow hackers have already been sentenced to federal prison, so this third and final sentencing concludes the court trials for a series of crimes that took more than $3 million from up to 50 local businesses. U.S. Attorney Jenny A. Durkan, who leads the Justice Department’s Cybercrime and Intellectual Property Enforcement working group, commended the businesses that quickly alerted law enforcement about the intrusions on their computer systems. Minnesota Wi-Fi hacker gets 18 years in prison for terrorizing neighbors. Minnesota hacker Barry Ardolf was sentenced to an 18-year term in a federal prison this Tuesday. Ardolf had terrorized a neighboring family for two years through a carefully planned campaign involving a hijacked Wi-Fi network to harass, frame and embarrass the next-door neighbors in every facet of their lives.

Ardolf’s obsessive passive-aggression was apparently ignited in late 2008 when his neighbors, Matt and Bethany Kostolnik, filed a police report against him. The Kostolniks had a 4-year old son who wandered over to their next-door-neighbors property shortly after moving into the Minnesota suburb of Blaine.

Ardolf, 46 and a father of two, had reportedly picked the boy up carried him back to the couple and then kissed the child on the lips. Ardolf was offended when the cops were called and vowed his revenge like every good villain. 7-year-old shows how to hack Wi-Fi in less than 11 MINUTES. Experts predict a rise in criminals hacking ‘free Wi-Fi’ in 2015To highlight the dangers, a virtual private network provider asked a seven-year-old to hack a networkThe child watched an online tutorial before hacking into the Wi-Fi hotspotIt took her just 10 minutes and 54 seconds to infiltrate the network By Victoria Woollaston for MailOnline Published: 11:07 GMT, 21 January 2015 | Updated: 19:29 GMT, 22 January 2015.