IFA 2015: what you can expect from Europe's largest electronics trade show. Sony Lavender rumored to launch as Xperia C5 Ultra. Commodore Is Back, Baby, With a … Smartphone? Commodore, the name that helped usher in the PC revolution, is back. 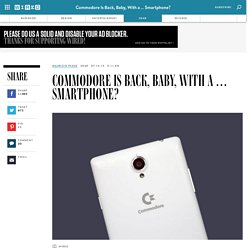 With a phone. For those of you too young to remember, Commodore was a hot company in the mid-1980s. It was a leader in personal computers, shipping thousands of Commodore 64 desktops daily. Guinness has named it the single biggest-selling computer ever—the company sold as many as 17 million of them—and the brand name is still widely remembered. Still, the company went bankrupt in 1994, and the brand saw several fuzzy changes of trademark ownership over the years. Galaxy S6 Edge Plus price, release date, specs and rumors. Samsung Galaxy S6 Edge Plus price and release date Though Samsung usually unleashes its phablets at its "Samsung Unpacked" events at IFA (as it did last year with the Galaxy Note 4 and Galaxy Note Edge); this year things could be different. 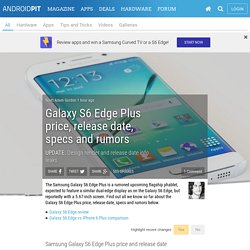 Sam Mobile reports that the Galaxy S6 Edge and Galaxy Note 5 will be announced on August 12, and will go on sale August 21. Huawei's Nexus phone just got outed in all its glory. Renowned leaker Evan Blass, aka @evleaks, has posted what he claims are the impressive specs of Huawei's upcoming Nexus device. 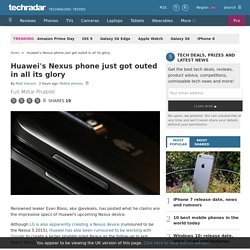 Samsung Galaxy A8 could be heading to UK after all - What MobileWhat Mobile. Is Microsoft releasing 6 new Lumia smartphones as part of Windows Phone restructuring process? Technology giant Microsoft, which witnessed the market share of its Windows Phone devices decline by 0.5% in the US, is rumoured to launch six new handsets later this year. 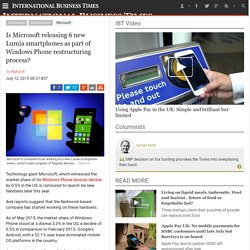 And reports suggest that the Redmond-based company has started working on these handsets. As of May 2015, the market share of Windows Phone stood at a dismal 3.0% in the US, a decline of 0.5% in comparison to February 2015. Meizu to be Nokia's new smartphone partner? Nokia confirms plans to return to mobile phone market. HTC Unveils Four New Desire Smartphones. HTC has announced four new HTC Desire smartphones, including the HTC Desire 520, Desire 526, Desire 626, and Desire 626s. 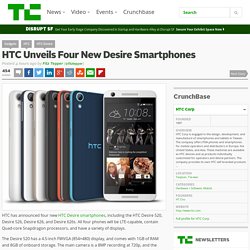 All four phones will be LTE-capable, contain Quad-core Snapdragon processors, and have a variety of displays. The Desire 520 has a 4.5-inch FWVGA (854×480) display, and comes with 1GB of RAM and 8GB of onboard storage. After media speculation, Nokia comments on returning to the mobile phone market. After selling their Devices & Services business to Microsoft, Nokia have been left to languish in relative obscurity. 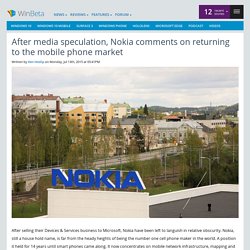 Nokia, still a house hold name, is far from the heady heights of being the number one cell phone maker in the world. A position it held for 14 years until smart phones came along. It now concentrates on mobile network infrastructure, mapping and navigation and advanced technology and licensing. When Nokia sold their phone division to Microsoft, the agreement stipulated that Microsoft had a limited time to use the Nokia branding on their devices and services. Due to this, in the last year, Microsoft has transitioned the branding of its phones from Nokia to Lumia and that now leaves the door wide open for Nokia to return in to the mobile devices game should they wish to do so.

Samsung Reportedly Planning To Release Galaxy S7 In Second Half Of 2015 (Or Perhaps Not) Samsung is gearing up to launch the Galaxy S7 two to three months earlier than the original schedule. 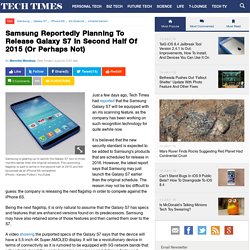 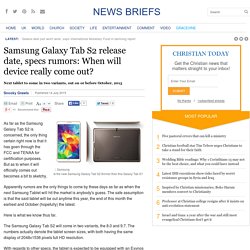 Commodore returns with an emulator-equipped smartphone. People of a certain age *awkwardly tugs collar* tend to get a little misty-eyed when talking about the great Commodore 64, as it was the machine that helped usher an entire generation into the world of personal computing. 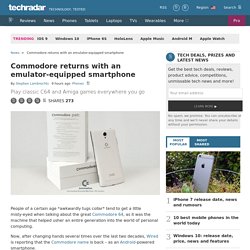 Now, after changing hands several times over the last two decades, Wired is reporting that the Commodore name is back – as an Android-powered smartphone. The Commodore PET (named after the Commodore's first full-featured computer from 1977) has a 5.5 inch display, a 1.7GHz octa-core Mediatek processor, a 13-megapixel rear facing camera and a 3000 mAh battery. Sorry mum, can't talk – playing LeMans. The iPhone 7 Is Out In September, And It Could Be Amazing. Despite being months from its release, the iPhone 7 is already a hot topic of discussion. 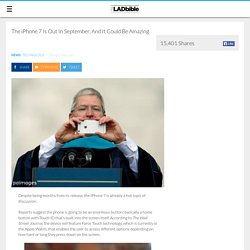 Reports suggest the phone is going to be an enormous button; basically a home button with Touch ID that’s built into the screen itself. According to The Wall Street Journal, the device will feature Force Touch technology, which is currently in the Apple Watch, that enables the user to access different options depending on how hard or long they press down on the screen. Other reported new features on the iPhone 7, which is due for release in September, include wireless charging (so no more broken charger wires!) And a pre-installed Apple SIM, which allows consumers to sign up for mobile data plans from any carrier directly from the Settings app without long-term contracts. The pre-installed SIM will also mean you can switch provider at any time. We're not sure how much it's going to cost yet, but you'd better start saving. iPhone 7 release date, news and rumours. Latest update: New schematics apparently confirm the iPhone 6S will be 0.02mm thicker than the iPhone 6, while China Mobile could have spoilt Apple's LTE-A Cat 6 surprise.