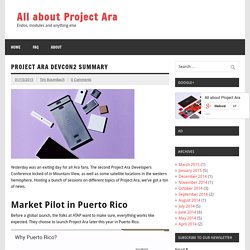 The second Project Ara Developers Conference kicked of in Mountain View, as well as some satellite locations in the western hemisphere. Hosting a bunch of sessions on different topics of Project Ara, we’ve got a ton of news. Market Pilot in Puerto Rico Before a global launch, the folks at ATAP want to make sure, everything works like expected. They choose to launch Project Ara later this year in Puerto Rico. They picked the United States territory for being a mobile first country, being split in half with feature and smartphone users and the country being affected by FCC regulations. What is Project Ara? Initially, Phonebloks concept was created by a Dutch designer Dave Hakkens and later developed by Motorola’s Advanced Technology and Projects (ATAP) group owned by Google. 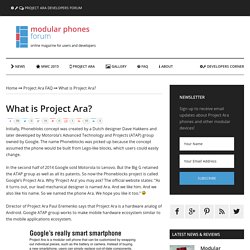 The name Phoneblocks was picked up because the concept assumed the phone would be built from Lego-like blocks, which users could easily change. In the second half of 2014 Google sold Motorola to Lenovo. But the Big G retained the ATAP group as well as all its patents. Project Ara design And how to connect the modules (video) Ara Project of Google is an extremely interesting modular smartphone project but the project ara design is one of the aspects that will surely be a challenge for Google and companies that are involved in the production of modules for Ara project. 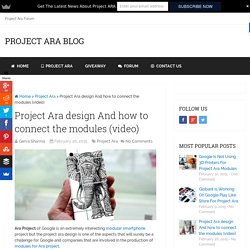 It is not a simple thing to fix but the company Caseable , which produces bags for laptops, has accepted the challenge to achieve better project ara design modules for modular smartphone from Google. The idea is to give the user the ability to choose the final appearance of each module, a feature similar to what you already do with laptops where users decide each piece.

Obviously the possibility to get a taste based on own product appears to be an excellent thing but at the same time increasing prices. In addition Caseable uses recycled materials, which will surely not help reduce the final price of each products ( enough to visit the official site to see the prices they use) Google Project Ara at Linaro Connect 2015. Yezz To Make Modules For Project Ara Smartphone. Project Ara is the future – at least when it comes after Google. 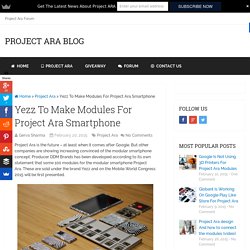 But other companies are showing increasing convinced of the modular smartphone concept. Producer DDM Brands has been developed according to its own statement that some 100 modules for the modular smartphone Project Ara. These are sold under the brand Yezz and on the Mobile World Congress 2015 will be first presented. Google Project Ara development boards at Linaro Connect, Greybus status with Greg Kroah-Hartman. Here's what Project Ara phones will actually look like. Sure, we've seen prototypes of Google's Project Ara before, but these dummy modules from budget phone maker Yezz mobile are as good a hint to how the phone might actually look in real life. 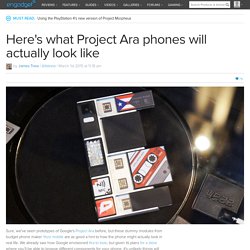 We already saw how Google envisioned Ara to look, but given its plans for a store where you'll be able to browse different components for your phone, it's unlikely things will be that uniform. It doesn't take much to imagine that Ara's customizable nature will mean all the different clip-in components will rarely be an aesthetic match. That's to say, your phone is likely going to be a patchwork of colors and designs, so why not embrace that and go all in? Yezz's prototype modules show us how that future will look.

Yezz mobile currently makes mid-range, colorful phones (like this "Andy 5S"), but it's betting on Ara, and trying to get in early. Don't miss out on all the latest news, photos and liveblogs from MWC 2015. Phonebloks update - The team behind Ara. Google's modular Project Ara smartphone will begin pilot testing in Puerto Rico later this year. Google is holding its second Project Ara developer's conference today in Mountain View and is in the process of giving a roadmap on how and when it might get its modular smartphones out into the market. 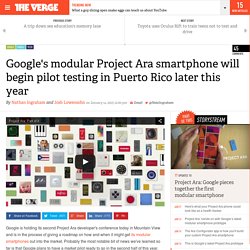 Probably the most notable bit of news we've learned so far is that Google plans to have a market pilot ready to go in the second half of this year. Unfortunately, if you want to give it a shot, you'll need to live in Puerto Rico — the pilot will roll out in that territory in partnership with carriers OpenMobile and Claro. Project Ara - Release Date, Price, News And Updates. An Example of future’s Project Ara Smartphone. 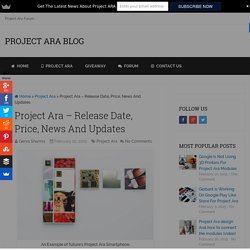 Google announced at its second Project Ara Module Developers Conference that it will unveil a modular smartphone in Puerto Rico this year as part of a pilot program that will allow people to choose their own hardware based on their needs and interests. It also unveiled the Spiral 2 Project Ara prototype. The company will partner with Mexico-based carrier Claro and local carrier Open Mobile to offer the product sometime after Q2, and it will be sold from free-standing stores that look like food trucks, said Jessica Beavers, a Google marketing executive. She said Puerto Rico was chosen in part because more than 90 percent of households on the island of nearly 3.7 million people use a cellphone and 77 percent of Internet access occurs through mobile devices. 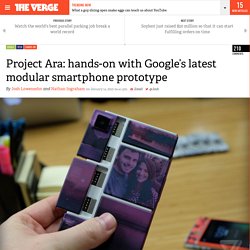 Google is a part of that with Android and with its Nexus devices. But it’s also attacking the very idea of smartphones as we know them with Project Ara: a project to build a phone that doesn’t cram everything into the smallest package, but one that lets you pick out and swap every important component. It’s a lot like the way many desktop computers still work — but for your pocket. We just got our hands on a very, very early version of a Project Ara device. It’s come a long way since its introduction in 2013, and even more since Google showed it off at its developer conference last year. 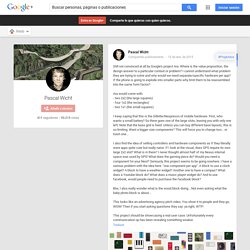 Where is the value proposition, the design answer to a particular context or problem? I cannot understand what problem they are trying to solve and why would we need separate/specific hardware per app? If the phone is going to explode into smaller parts why limit them to be reassembled into the same form factor? Ara would come with:- two 2x2 (the large squares)- four 1x2 (the rectangles)- two 1x1 (the small squares) I keep saying that this is the Gillette/Nespresso of mobile hardware. I also find the idea of selling controllers and hardware components as if they literally were apps quite cute but really naive. Btw, I also really wonder what is the wood block doing... This looks like an advertising agency pitch video.