Blog.placeilive. Blog.placeilive. The Mayor's Vision for Cycling in London. From Garden City to Green City, Letchworth Garden City Heritage Foundation. 5 Of the UK's Greenest Cities. By Diane Small Given the dedication to the environment by Scandinavian countries, it’s no surprise that England is often referred to as ‘the dirty old man’ of Europe. 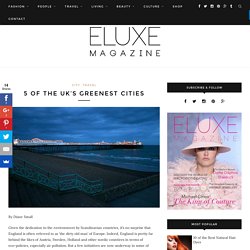 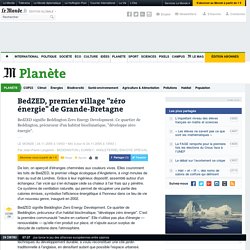 The Crystal by Siemens, London. The Crystal is a visitor centre and knowledge hub built by Siemens in London, UK. 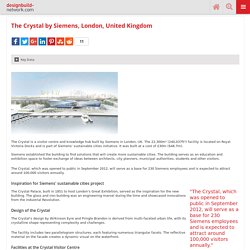 The 22,300m² (240,037ft²) facility is located on Royal Victoria Docks and is part of Siemens' sustainable cities initiative. It was built at a cost of £30m ($48.7m). Siemens established the building to find solutions that will create more sustainable cities. The building serves as an education and exhibition space to foster exchange of ideas between architects, city planners, municipal authorities, students and other visitors. The Crystal, which was opened to public in September 2012, will serve as a base for 230 Siemens employees and is expected to attract around 100,000 visitors annually.

Inspiration for Siemens' sustainable cities project "The Crystal, which was opened to public in September 2012, will serve as a base for 230 Siemens employees and is expected to attract around 100,000 visitors annually. " A Sustainable Cities Initiative by Siemens. London Eco City. Green Spaces: The Benefits for London. London becomes a Roof Garden City with green living roofs, sky gardens and sustainable sky parks. How green in Manchester? - Manchester Headline News. NOMA : Do you know what it is yet? - Huddled.

August 1, 2014 The Buzz 0 362 Andrew Williams One thing which affects us all, and business owners especially, is the redevelopment of our city. 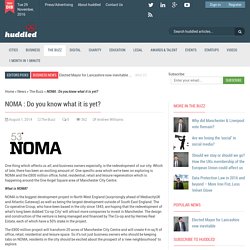 Which of late, there has been an exciting amount of. One specific area which we’re keen on exploring is NOMA and the £800 million office, hotel, residential, retail and leisure regeneration which is happening around the One Angel Square area of Manchester City Centre. Europe's largest floating solar farm to open. Image copyright Lightsource The biggest floating solar farm in Europe is being constructed on a reservoir. 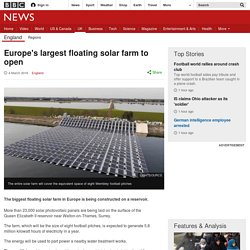 More than 23,000 solar photovoltaic panels are being laid on the surface of the Queen Elizabeth II reservoir near Walton-on-Thames, Surrey. The farm, which will be the size of eight football pitches, is expected to generate 5.8 million kilowatt hours of electricity in a year. The energy will be used to part power a nearby water treatment works. Thames Water said construction of the solar farm, which is about eight miles (13 km) from Heathrow airport, will be completed by the end of March. European Green Capital. Image by C. 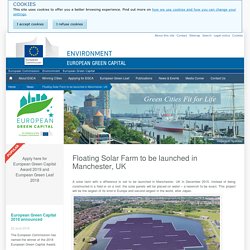 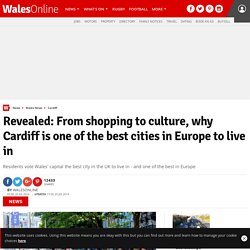 Cardiff was one of six cities in the UK to be surveyed, alongside London, Glasgow, Belfast, Newcastle-upon-Tyne and Manchester. It came top out of these six cities in most categories with 92% saying they liked living in the Welsh capital. Greater Manchester 2040: Our Strategy. Bristol becomes European Green Capital 2015. Bristol has been officially handed the status of European Green Capital by the outgoing city Copenhagen. 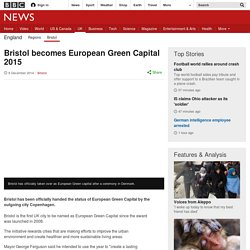 Bristol is the first UK city to be named as European Green Capital since the award was launched in 2008. The initiative rewards cities that are making efforts to improve the urban environment and create healthier and more sustainable living areas. Mayor George Ferguson said he intended to use the year to "create a lasting legacy" the city would be proud of. What are the greenest cities in the UK? From transport initiatives and top class recycling schemes to preserving green space and renewable energy projects, the UK is full of eco-friendly and green cities. 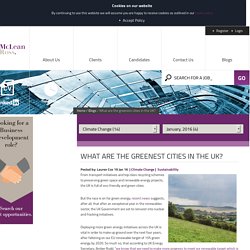 But the race is on for green energy; recent news suggests, after all, that after an exceptional year in the renewables sector, the UK Government are set to reinvest into nuclear and fracking initiatives. Deploying more green energy initiatives across the UK is vital in order to make up ground over the next four years, after faltering on our EU renewable target of 15% green energy by 2020. So much so, that according to UK Energy Secretary, Amber Rudd, “we know that we need to make more progress to meet our renewable target which is why I’m working with other departments to ensure that action is taken across heat and transport.” With this in mind, what are the greenest cities in the UK and who are at the forefront of renewable energy? 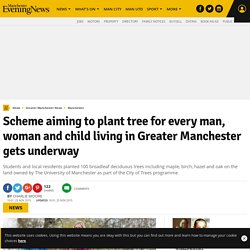 Students and local residents planted 100 broadleaf deciduous trees including maple, birch, hazel and oak on the land owned by The University of Manchester as part of the City of Trees programme. City of Trees is looking to transform 2,000ha of currently under-used woodland that could be brought into better management and aims to plant three million trees over the next two decades. The movement is led by Red Rose Forest, the community forest organisation for Greater Manchester, and The Oglesby Charitable Trust, and has the support of businesses, organisations and community groups. Further tree planting will take place over a diverse range of sites, including new woodlands, community woodlands, schools, private and residential land. Pages - News. A greener future is on the way for St Peter’s Square as work started to plant more than 20 semi-mature trees as part of the Metrolink stop transformation.

Half a dozen trees are being installed in the square this week – between the new Metrolink line and Manchester Town Hall – with more to follow in coming months. Oxford Road Green Corridor. Oxford Road is a major transport route into Manchester. New urban tree planting and green roof installation will help transform the Oxford Road Corridor of Manchester City Centre into a ‘green corridor’. London, sustainable city. EcoHouse: Moving From London To Luxury Environmentally Friendly Houses. Urban Regeneration. Altrincham regeneration project - Manchester Headline News. Silent stress among urban dwellers. The Benefits of Urbanisation. How to Make an Attractive City. City living 'makes it harder to concentrate' Cities really do disrupt people's ability to concentrate, suggests research. Researchers from Goldsmiths, University of London have studied a remote tribe in Africa - where some people have remained in the countryside while others have moved to urban areas.

It found the urbanised group found it much harder to focus their attention. Researcher Karina Linnell says the difference in powers of concentration was much greater than expected. Need a concentration boost? Just look at this picture for 40 seconds. Don't grab a coffee for that concentration boost, just look out of the window. Researchers say that simply looking at nature from your desk for 40 seconds can boost your brainpower. They found even people looking at a picture of screen of a meadowlike green roof saw an effect. Classe inversée en anglais : « préparés, les élèves arrivent en classe rassurés » Pour que ses élèves abordent sereinement l'anglais à l'oral, Frédéric Davignon utilise la classe inversée. Ses capsules apportent les clés indispensables aux travaux pratiques. City vocabulary places around the city English lesson.

How To Create Sustainable, Pulsating Cities of the Future. City vs Countryside : Cambridge or IELTS Speaking Exam. Is An Urban Atmosphere Better For Survival? Slice of urban life. How the States Got Their Shapes. Living in the City vs. Living in the Country. FREE MP3 – City Life – Zapp! English Listening 2.6. Zapp! Like two different worlds. Rural bliss? For some, living in the countryside is a dream come true. Life in the city versus life in the country. Does it matter if you live in a town or city? Tomorrow's cities: Do you want to live in a smart city? Tomorrow's cities: What's it like to live in a smart city? City Vs. Country- Which is Safer? The experiences of a young person from an urban area and a young person from a rural area. Rural vs. Urban SPHS. City vs Country - WINNER "Best Junior Documentary" 2012 AKFF. Country VS City Life. The advantages and disadvantages of living in the country - Angielski - Języki.