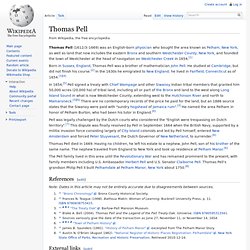 He studied at Cambridge, but did not finish his course.[2] In the 1630s he emigrated to New England; he lived in Fairfield, Connecticut as of 1654.[3][4] Pell was legally challenged by the Dutch courts who considered the "English were trespassing on Dutch territory".[7] This dispute was finally resolved by Pell in September 1664 when the British Navy, supported by a militia invasion force consisting largely of City Island colonists and led by Pell himself, entered New Amsterdam and forced Peter Stuyvesant, the Dutch Governor of New Netherland, to surrender.[6] Thomas Pell died in 1669. References[edit] External links[edit] Wall Street Crash of 1929. Stock market crash of 1929 The Wall Street Crash of 1929, also known as the Great Crash, was a major stock market crash that occurred in 1929. 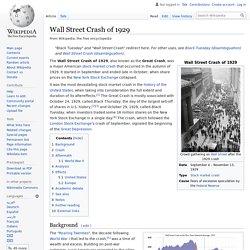 It started in September and ended late in October, when share prices on the New York Stock Exchange collapsed. It was the most devastating stock market crash in the history of the United States, when taking into consideration the full extent and duration of its after-effects.[1] The crash, which followed the London Stock Exchange's crash of September, signaled the beginning of the Great Depression.

Background[edit] The "Roaring Twenties", the decade that followed World War I that led to the crash,[2] was a time of wealth and excess. On September 20, the London Stock Exchange crashed when top British investor Clarence Hatry and many of his associates were jailed for fraud and forgery.[7] The London crash greatly weakened the optimism of American investment in markets overseas.[7] In the days leading up to the crash, the market was severely unstable. 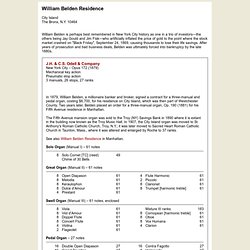 & C.S. Odell & Company New York City – Opus 172 (1879) Mechanical key action Pneumatic stop action 3 manuals, 26 stops, 27 ranks In 1879, William Belden, a millionaire banker and broker, signed a contract for a three-manual and pedal organ, costing $6,700, for his residence on City Island, which was then part of Westchester County. Two years later, Belden placed an order for a three-manual organ, Op. 190 (1881) for his Fifth Avenue residence in Manhattan. The Fifth Avenue mansion organ was sold to the Troy (NY) Savings Bank in 1890 where it is extant in the building now known as the Troy Music Hall. The Black Whale - An insider's guide to City Island, the Bronx. City Island Really Is the Newest BroBo Paradise. City Island Loses a Venerable Fisherman's Paradise. City Island Chamber of Commerce. House at 175 Belden Street. Execution Rocks Light. Execution Rocks Light is a lighthouse in the middle of Long Island Sound on the border between New Rochelle and Sands Point, New York. 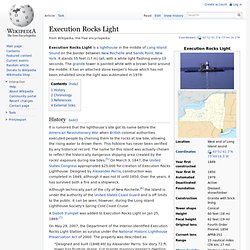 It stands 55 feet (17 m) tall, with a white light flashing every 10 seconds. The granite tower is painted white with a brown band around the middle. It has an attached stone keeper's house which has not been inhabited since the light was automated in 1979. History[edit] It is rumored that the lighthouse's site got its name before the American Revolutionary War when British colonial authorities executed people by chaining them to the rocks at low tide, allowing the rising water to drown them.

Although technically part of the city of New Rochelle,[6] the island is under the authority of the United States Coast Guard and is off limits to the public. A Daboll trumpet was added to Execution Rocks Light on Jan 25, 1869.[7] "Designed and built (1848-49) by Alexander Parris. The U.S. The lighthouse was featured on the Travel Channel show Ghost Adventures in 2009. City Island Nautical Museum. Henry B. Nevins, Incorporated. Henry B. 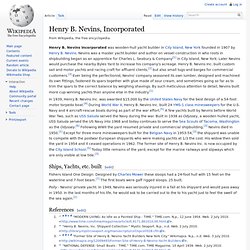 Nevins Incorporated was wooden-hull yacht builder in City Island, New York founded in 1907 by Henry B. Nevins. Nevins was a master yacht builder and author on vessel construction in who roots in shipbuilding began as an apprentice for Charles L. Seabury & Company[1] in City Island, New York. Later Nevins would purchase the nearby Byles Yard to increase his company's acreage.