Welcome to Inside Out Project 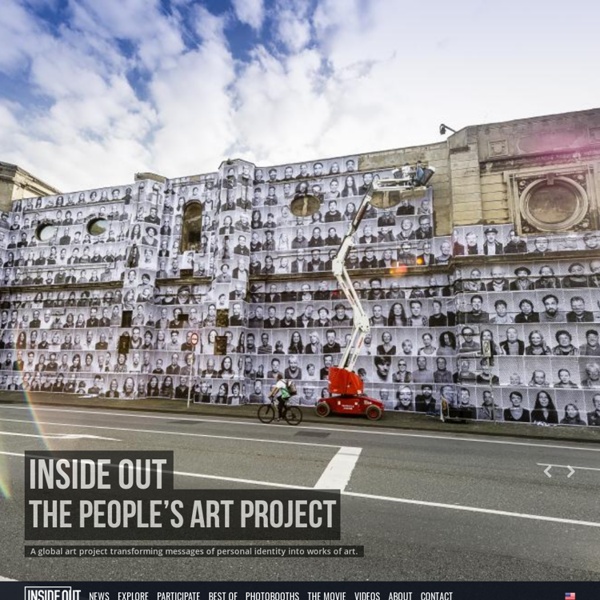 Inside Out Project In order to participate in the Inside Out Project, you need to organize a Group Action. Gather 5 or more people around a same statement, submit their portraits, we will print them as posters and send them to you so you can create and coordinate an exhibit together by pasting them in your community! The exact rules can be found in our Group Action Guidelines. Start by creating an account and we will be in touch shortly! An INSIDE OUT Group Action happens when one or more group leaders commit to leading their own independently organized project somewhere in the world. Group leader(s) choose a statement and gather a minimum of five participants to have their portraits taken with the statement as their focus.

Guus Hendrickx - Outlook Web App Type the email address of the account you want to sign in with. We're having trouble locating your account. Which type of account do you want to use? Sign in to Office 365 Which type of account do you want to sign in with? Street art John Fekner: Broken Promises/Falsas Promesas, South Bronx, 1980. The terms "urban art", "guerrilla art", "post-graffiti" and "neo-graffiti" are also sometimes used when referring to artwork created in these contexts.[1] Traditional spray-painted graffiti artwork itself is often included in this category, excluding territorial graffiti or pure vandalism. Artists who choose the streets as their gallery are often doing so from a preference to communicate directly with the public at large, free from perceived confines of the formal art world.[2] Street artists sometimes present socially relevant content infused with esthetic value, to attract attention to a cause or as a form of "art provocation".[3] Street artists often travel between countries to spread their designs. Some artists have gained cult-followings, media and art world attention, and have gone on to work commercially in the styles which made their work known on the streets.

Shocked by Paul McCarthy's butt plug? You obviously haven't seen his phallic Pinocchio Anality is in the eye of the beholder. An inflatable sculpture by American artist Paul McCarthy has been vandalised – and the artist himself assaulted – after a flurry of outrage in Paris over a sculpture that is said to resemble a type of sex toy known, I am informed, as a butt plug. I feel old fashioned that I had to be told that. The work is called Tree, and if I didn’t know about the accusation that it looks like a sex toy, I would probably have taken the title at face value.

Reclaim the Streets Reclaim the Streets (RTS) is a collective with a shared ideal of community ownership of public spaces. Participants characterize the collective as a resistance movement opposed to the dominance of corporate forces in globalization, and to the car as the dominant mode of transport. §Protests[edit] Reclaim the Streets is also used for this type of political action, regardless of its actual relation to the RTS movement. §History[edit] 10 Lessons Lee Friedlander Has Taught Me About Street Photography In my opinion, Lee Friedlander is one of the most under-appreciated (or simply unknown) street photographers when it comes to the internet/social-media sphere. Of course Friedlander is one of the pillars of photography and is known to every student who has gone to photography school. However when I started photography, I had no idea who he was or never even heard of him.

2014: the year British art became irrelevant Something faded to grey in British art in 2014. A spark of vitality went out. The avant garde became docile, introspective and irrelevant. Blek le Rat meets Banksy in the Mission A tipster sent us these pics of the latest addition to the ongoing collaborative mural by Public Works started by Banksy during his 2010 promotional surge through the city. This augmentation was allegedly added by none other than French pioneering stencil artist Blek Le Rat. More pics after the jump.

Why a charcoal of police in Ferguson is the most important artwork of 2014 2014 has produced horrific politics. Racism has returned, that hydra-headed idiot, everywhere from Missouri to Rochester, where a Ukip candidate won a byelection after openly speculating about repatriating Europeans. It is not much by way of compensation to say the year also produced a mighty piece of political art. But it did.

Blek le Rat Xavier Prou (Blek le Rat) at the gallery opening and book signing at the 941 Geary Gallery, San Francisco Blek le Rat, (pronounced: [blɛk lə ʁa]; born Xavier Prou,[1] 1952)[2] was one of the first graffiti artists in Paris, and has been described as the "Father of stencil graffiti".[3] Early life[edit] Xavier Prou was born in Boulogne-Billancourt in the western suburbs of Paris in 1951 or 1952. Street Photography Composition Lesson #13: Multiple-Subjects I think one of the most difficult compositional techniques in street photography is to incorporate multiple subjects in the frame — without it becoming too cluttered or overwhelming. Generally the problem is that most photographers that try to incorporate multiple subjects have some of the following problems: Overlapping subjectsDistracting backgroundsNo central subjectNot enough points of interest In this article I will share some of who I think are the finest photographers to have used multiple-subjects in their photos. I will analyze the images, and hopefully provide practical tips to anyone trying to incorporate more multiple subjects in the frame.